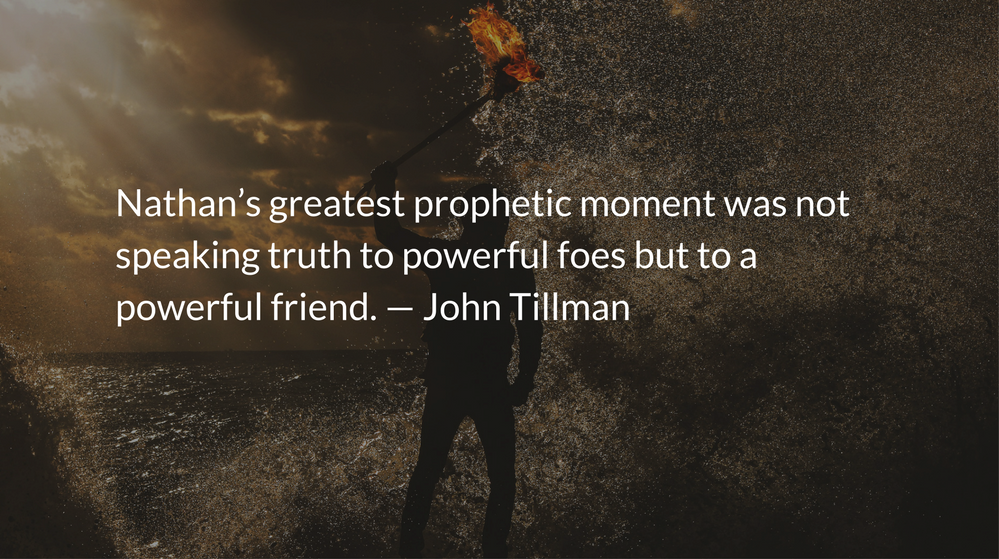 You Are The Man — Embracing Prophetic Responsibility

Reflection: You Are The Man — Embracing Prophetic Responsibility
By John Tillman

You are the man!

But the phrase’s first usage in history is not as affirmation, but accusation. It is the climax to a dangerous confrontation between a ruler in the wrong, and a prophet speaking truth to power.

Through Nathan we see reflections of the difficulty of God’s people interacting with government and politics. In chapter seven, Nathan is a close confidant of the ruler. He affirms the king without a word from the Lord, saying “Whatever you have in mind, go ahead and do it.” However, Nathan soon hears from God, and must return to the king and walk that statement back. It is not until chapter twelve we see Nathan’s finest hour as a prophet.

Nathan didn’t let his cozy relationship strip him of his prophetic responsibility. Cozy is a pleasant word to describe a chair, a sweater, or a friendship. But with Christians and political leaders, it’s a short journey from cozy to cozened. It’s easy to be like chapter seven Nathan, but few are willing to be chapter twelve Nathan.

When Christians speak truth to power, we are empowered with the same Holy Spirit that spoke to Nathan. Whether to a monarch, a magistrate, or a magnate, we represent the message of the Gospel. We tend to use that power and authority inconsistently, however.

Too often we reserve “You are the man” for political opponents and “Whatever you have in mind, go ahead and do it.” for political allies. Writing to American Catholics, Bill McCormick said:

Catholics often argue about which party better represents the Gospel. Have that argument if you like, but do not forget the bigger picture: Neither party can be the home of the Catholic voter…If you want to object and say that one party is better than the other for Catholics, you are missing the point.

It is important for us to remember that Nathan’s greatest prophetic moment was not speaking truth to powerful foes but to a powerful friend—his “boss” whom he was on good terms with. Everyone challenges those they oppose to change. Followers of Christ are called to challenge the communities and individuals we are closest to.

Challenging opposing political figures or faceless political parties requires neither tact nor courage when we reject them as part of our community. When we do this—just as the prophet Jonah—we forsake the purpose of prophetic confrontation.

Our purpose is not retribution or rejection, but redemption and reconciliation. When we confront others, we must let our tone reflect the ministry of reconciliation that we have been given.

“You are the man” is a challenging accusation, but it is simultaneously a heartfelt invitation back into community.

The Prayer Appointed for the Week
Grant me, O Lord, to trust in you with all my heart; for, as you always resist the proud who confide in their own strength, so you never forsake those who make their boast of your mercy; through Jesus Christ our Lord, who lives and reigns with you and the Holy Spirit, one God, now and for ever. Amen.