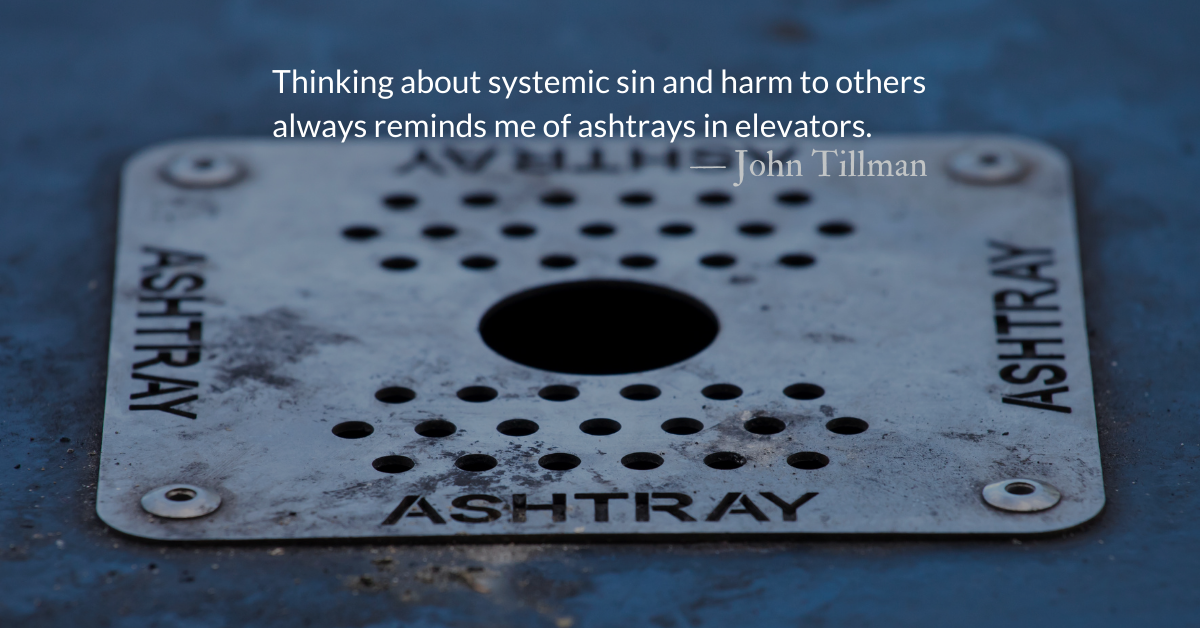 Are There Ashtrays in Your Elevators?

Scripture Focus: Numbers 5.5-8
5 The Lord said to Moses, 6 “Say to the Israelites: ‘Any man or woman who wrongs another in any way and so is unfaithful to the Lord is guilty 7 and must confess the sin they have committed. They must make full restitution for the wrong they have done, add a fifth of the value to it and give it all to the person they have wronged. 8 But if that person has no close relative to whom restitution can be made for the wrong, the restitution belongs to the Lord and must be given to the priest, along with the ram with which atonement is made for the wrongdoer.

Reflection: Are There Ashtrays in Your Elevators?
By John Tillman

God’s law is clear. Harming others is sin against God. There is no way in which a person can be harmed that is not connected to sin. Thinking about systemic sin and harm to others always reminds me of ashtrays in elevators.

If you happen to see an ashtray in an elevator, I’d recommend taking the stairs. That elevator is old.

When smoking was viewed as innocuous, even healthful, it was incorporated into every aspect of life. From the 60s to the 80s, ashtrays were a ubiquitous normality of architecture and design. They appeared on every surface like not-so-secret compartments with nifty little sliding, rotating, or opening panels. Like light switches, they were built into the walls of hallways, offices, and hospital rooms. They were in desks and bathroom stalls and above every urinal. Some cars had more ashtrays than seatbelts. Airlines installed them in armrests both in terminals and in planes. But most memorable to me, for some reason, were the ones in elevators. Not even for the brief time of riding in an elevator, could people do without an ashtray.

Even as society realized that smoking was literally killing people, this didn’t change. We clung to personal freedom in defiance of scientific revelations. It was only when we recognized that cigarette smoke was not only harmful to the smoker but to everyone else in the elevators and other public spaces, that smoking “rights” began to be curtailed.

Is smoking a sin? Perhaps. But sin is absolutely like smoking.

In the individualistic West, we think of sin mostly as personal choices that only affect the individual. However, there are no sins that only harm ourselves. Sin is not just what happens inside our minds, souls, or bodies. Sin creates a transcendent cloud of tangible and intangible damage. This damage may be physical, economic, or cultural. Sin poisons everyone in our atmosphere.

Like ashtrays in elevators, there are always systemic, tangible, widespread, societal enablements of sins, especially if we think of them as innocuous. Let’s examine ourselves with sober judgment.

Are there ashtrays in your elevators? What in your life indicates an enabling of sin?
What sins do you think of as innocuous? Are you using personal freedom as an excuse for actions which harm others?
What harm to others do you need to repent of? What support structures of sins need to be ripped out of the walls of your life?

Read more about Steeped In Sin
Sin is gravity. It is our atmosphere. It is our water. We are radioactive with sin.

Read more about Suffering and Sin
We feel less responsible when we believe only the lazy are poor, only the promiscuous are in danger of sexual assault, only hedonists become addicts, and only nihilists suffer depression.