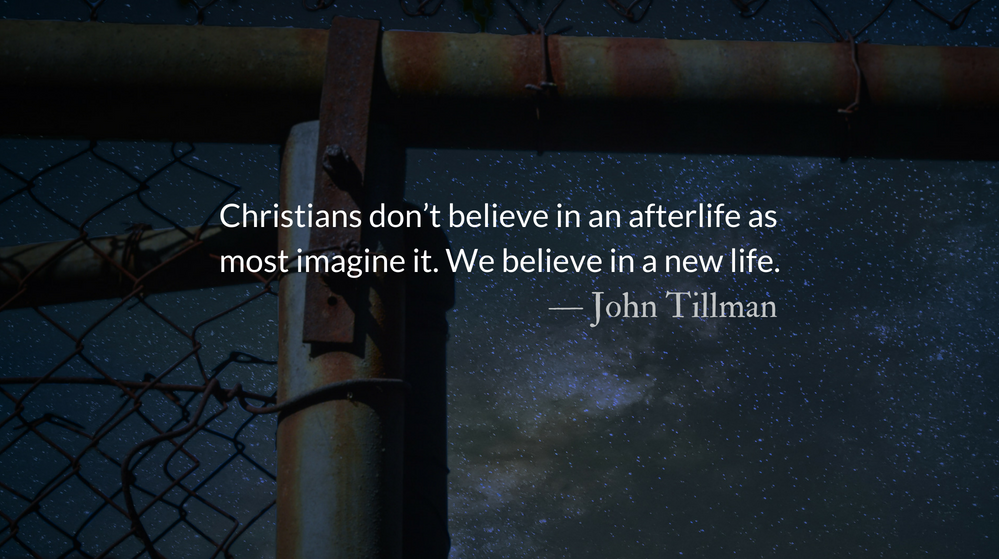 A New Life, Not an Afterlife

Reflection: A New Life, Not an Afterlife
By John Tillman

A key error that we often make regarding Heaven is thinking it will be the same as our lives now, but without without the worries and problems caused by sin.

We misinterpret Christ’s statement that we will be “like the angels” and imagine getting a halo and an angelic job to do—working under fussy supervisors and trying to earn our “angel wings” promotions.

The art we make confesses that our culture believes this misconception very strongly. Hollywood’s visions of afterlife trend toward squeaky clean neighborhoods and office buildings from idealistic 1950s television shows.

These kinds of ideas about afterlife as an extension or continuance of this life come more from Greek and Roman myth and other pagan religions than Judeo-Christian ideas.

Perhaps the Sadducees had these types of myth in mind when they challenged Jesus. The Sadducees did not believe in resurrection. The point of their hyperbolic, hypothetical story was to prove that resurrection was a foolish (and perhaps in this case, scandalous) concept.

But Jesus responded that the only foolish concept was that Heaven would be just like Earth.

Jesus is clear that even the “best things” of this life (like marriage relationships) aren’t the same in the new Heaven and Earth. They pass away and are replaced, reinvented, and changed. We, and everyone we know and love there, will be made new.

Thank God that Heaven won’t be more of the same! It will be new!

What earthly things might you have been, consciously or unconsciously, counting on being in Heaven?

Prayer: The Small Verse
My soul thirsts for the strong, living God and all that is within me cries out to him.

Additional Reading
Read More about The Eighth Day
The day of the Lord will be like the scraping of an old canvas to repaint a new landscape, or the burning and tilling under of a harvested field so a new kind of crop can be planted.

Readers’ Choice
In August we will look back at our readers’ favorite posts of the year. Submit a Readers Choice post
Tell us about a post and what it meant to you. What post made want to share?