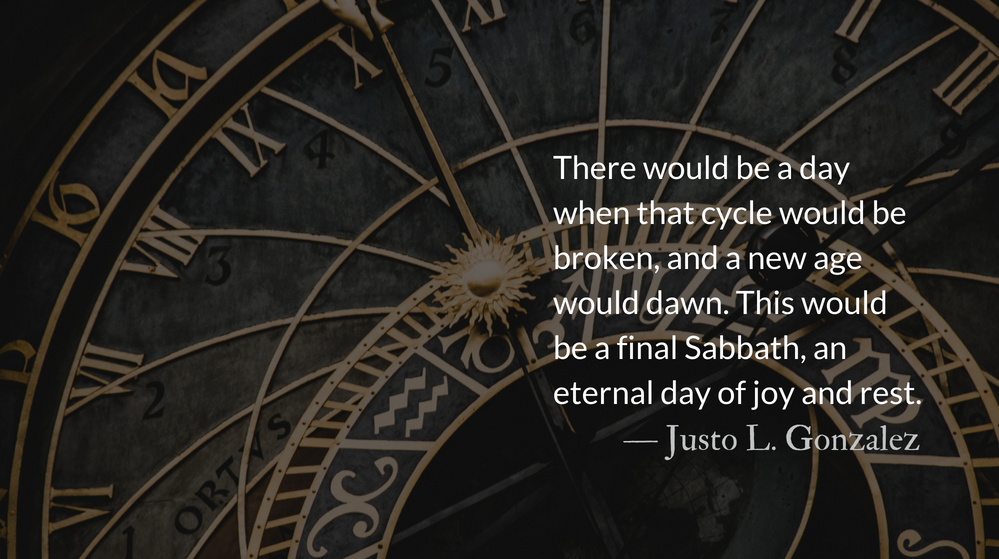 Scripture: 2 Peter 3.12-13
That day will bring about the destruction of the heavens by fire, and the elements will melt in the heat. But in keeping with his promise we are looking forward to a new heaven and a new earth, where righteousness dwells.

Peter encourages his readers about Christ’s second coming with thoughts that closely relate to the Jewish concept of the eighth day that was influential on early Christian belief and practice.

Justo L. Gonzalez writes about this concept in his book, A Brief History of Sunday:

In brief, the first day of the week, most commonly called the Lord’s day—the kyriaka or dominica—was taken as a celebration of the three great events of salvation history.

It was first of all the day of the resurrection of the Lord and therefore the beginning of the new creation.

It was also the very first day of the first creation, and therefore a time to rejoice in the goodness of God’s bounty.

And it was the eighth day of the week and therefore a day of hope pointing to the consummation of all things.

In our vitriolic culture it is easy to picture the second coming like a childish revenge fantasy where our enemies get theirs.

But Peter, despite his description of the violence of the day of the Lord, urges his readers not to gleefully anticipate the destruction of enemies but to dutifully make every effort to prepare themselves for the new creation.

The day of the Lord will be a day of destruction but not annihilation. It will be like the scraping of an old canvas to repaint a new landscape, or the burning and tilling under of a harvested field so a new kind of crop can be planted.

May we allow God’s Spirit to prepare our hearts to flourish, both now and in the new creation.

Prayer: A Reading
Jesus taught us, saying: “No one sews a piece of unshrunken cloth to an old cloak; otherwise, the patch pulls away from it, the new from the old, and the tear gets worse. And nobody puts new wine into old wineskins; otherwise, the wine will burst the skins, and the wine is lost and the skins too. No! New wine into fresh skins!” — Mark 2.21-22