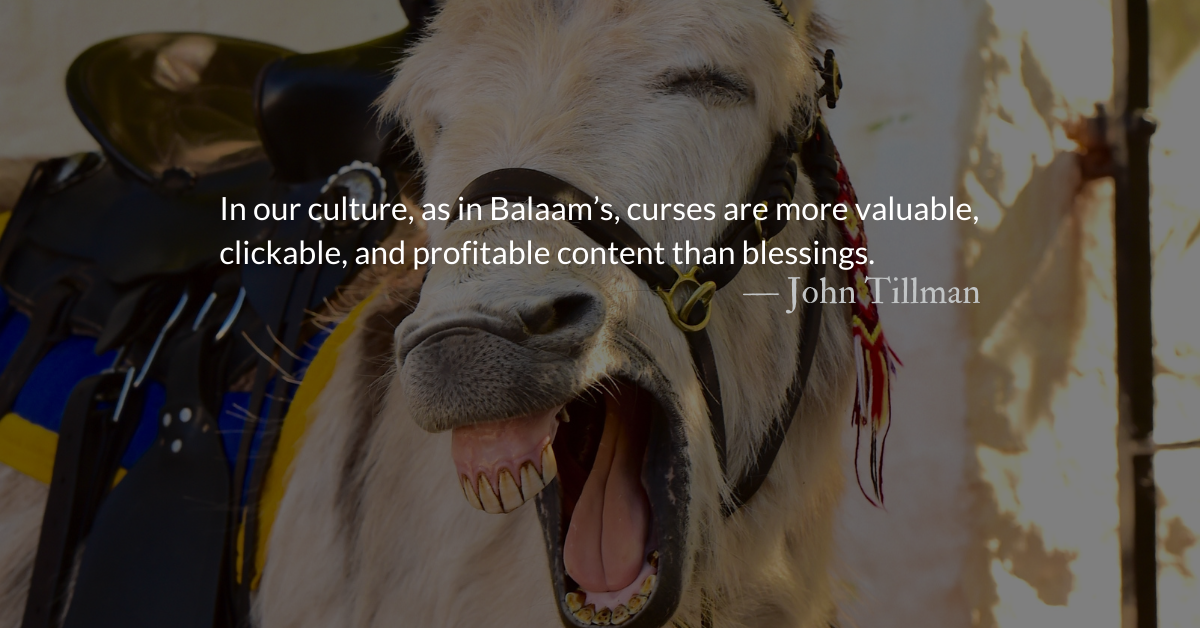 Scripture Focus: Numbers 22.32-33
32 The angel of the Lord asked him, “Why have you beaten your donkey these three times? I have come here to oppose you because your path is a reckless one before me. 33 The donkey saw me and turned away from me these three times. If it had not turned away, I would certainly have killed you by now, but I would have spared it.”

27 Then Balak said to Balaam, “Come, let me take you to another place. Perhaps it will please God to let you curse them for me from there.”

Jude 1.11-13
11 Woe to them! They have taken the way of Cain; they have rushed for profit into Balaam’s error; they have been destroyed in Korah’s rebellion.
12 These people are blemishes at your love feasts, eating with you without the slightest qualm—shepherds who feed only themselves. They are clouds without rain, blown along by the wind; autumn trees, without fruit and uprooted—twice dead. 13 They are wild waves of the sea, foaming up their shame; wandering stars, for whom blackest darkness has been reserved forever.

From John: In the early 2000s, some friends collaborating on children’s curriculum with a major Christian publisher were told that they couldn’t write about Balaam’s donkey because, “donkeys don’t talk.” I’m happy that later on, I joined my friends in writing about her in our own, independent curriculum. I love the story of Balaam’s donkey so much. This repost from 2019 reminds us that the best and most likeable character in Balaam’s story is the donkey.

The most relatable and likeable character in Balaam’s story is the donkey. Even the deadly angel who warned Balaam against colluding with Balak liked the donkey better than the man. The angel explained that if he had killed Balaam he would have been careful to spare the donkey’s life.  (Numbers 22.33)

Balaam may seem a minor, unpopular character but he has an impressive string of mentions throughout scripture which make clear he was unfaithful and deceptive. Despite this, he seemed to enjoy a relationship with God that sounds strangely similar to that of other prophets in scripture whose ethical principles were far higher.  Balaam made multiple prophecies about Israel that are not only true, but are often beautiful. For example:

Despite his seemingly close relationship with God and his ability to hear God speak, scripture is clear that Balaam showed the Lord little loyalty, reverence, or love. He continued attempting to do what Balak wanted. When God prevented him from doing it, he tried again. And again.

Modern believers have many advantages over prophets and priests in ancient times. We do not need to rely on divination, or strange practices to hear God. God’s Word is available to us in almost any language we could want and we have incredible opportunities for deep study and understanding of the Bible. Not only that, as Christians we have the indwelling power of the Holy Spirit who Christ promised would teach us the Scriptures and what they mean.

Despite all our advantages, we can sometimes still fall into the error of Balaam, thinking that God and the Word of the Lord can be used in a utilitarian way, whether that is to curse others or to bless ourselves.

In our culture, as in Balaam’s, curses are more valuable, clickable, and profitable content than blessings. Despite our cultural and personal tendencies to desire to bless ourselves, may we seek God for the joy of his presence, rather than the marketability of his miracles. May our proclamation of God’s Word be a blessing to those who hear it and never a curse.

Divine Hours Prayer: The Refrain for the Morning Lessons
Righteousness shall go before him, and peace shall be a pathway for his feet. — Psalm 58.13

Read more about Unworthy Prophets
There will always be prophets like Balaam. These prophets…tickle the ears of the powerful in exchange for assurances of influence and power.

Read more about Balaams and Balaks
Although God speaks through Balaam, there is no relationship of love or trust—no expectation of good faith.