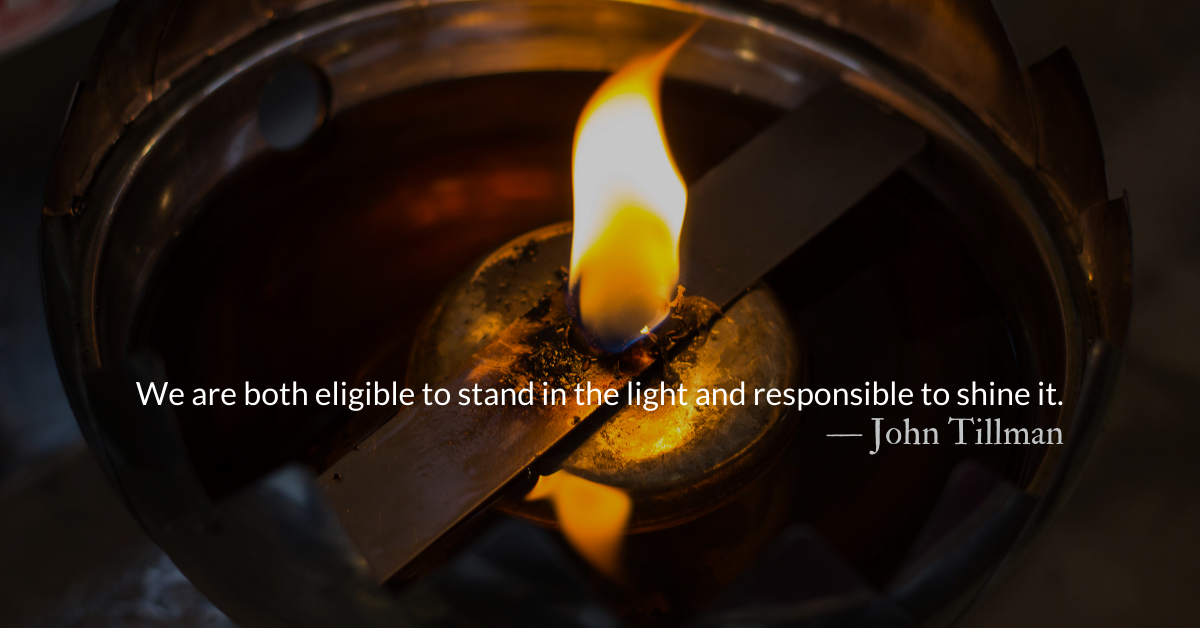 Scripture Focus: Exodus 27.20-21
20 “Command the Israelites to bring you clear oil of pressed olives for the light so that the lamps may be kept burning. 21 In the tent of meeting, outside the curtain that shields the ark of the covenant law, Aaron and his sons are to keep the lamps burning before the Lord from evening till morning. This is to be a lasting ordinance among the Israelites for the generations to come.

Exodus 25.23, 30
23 “Make a table of acacia wood—two cubits long, a cubit wide and a cubit and a half high. 24 Overlay it with pure gold and make a gold molding around it…30 Put the bread of the Presence on this table to be before me at all times.

John 6.57-58
57 Just as the living Father sent me and I live because of the Father, so the one who feeds on me will live because of me. 58 This is the bread that came down from heaven. Your ancestors ate manna and died, but whoever feeds on this bread will live forever.”

Every ordinance and ornamentation in the Tabernacle, and in the Temples that followed it, were weighty not just with gold but with symbolism.

We will focus on two—oil and bread. The oil and the bread are both, in their own way, symbols of God’s presence.

The lampstands and the oil were instrumental in shining out the light of God’s presence into the courtyard. Isaiah and John both tell us that, eventually in Heaven, the Lord will be our “everlasting light” and no lamps will be needed for there will be no more night. (Isaiah 60.19-20; Revelation 22.5)

Like Israel, we aren’t there yet. We live in the shadowy now, where night is always coming and shadows grow long. We live in a world that needs light.

The bread is symbolic of God as the source of life. Jesus was likely thinking of this bread when he said that he was the bread of life, the true manna from heaven. Many disciples left Jesus because of this difficult teaching, but Peter recognized and explained that it was Jesus’ teachings, the words that he gave them, that were life.

For the priests and the people, these lamps, faithfully tended and lit each evening, represented that God’s light was with them in the darkness.

The bread represented that God’s words were the sustenance of life that the community needed. As Jesus would say to Satan in the desert, we live by words from the mouth of God.

The bread and the oil also were a reminder that they had a responsibility to shine in their dark world and to partake of the wisdom of God.

In the Tabernacle, only the priests could eat this bread. Only the priests tended these lamps. But Jesus tore down the curtains and the barriers. We are each a temple of the Holy Spirit. We are all priests serving under Jesus, our high priest.

We are both eligible to stand in the light and responsible to shine it.
We are eligible to partake in the bread and to waft its fragrance to others and invite them in.

We must keep our lamps lit, faithfully bringing the oil.
We must partake in the bread that is true life, the word of God.

We need to make Jesus’ words our food. He is the true bread of life.

Read more about Names of Jesus—Justice, Bread, and Doctor
He is called bread, because by his gospel he fed the hunger of our ignorance. — Nicetas of Remesiana

Read more about Cultivating Daily Bread
Daily bread refers to a daily need for God and purposely highlights the need for spiritual disciplines that are required for us to grow in faith. 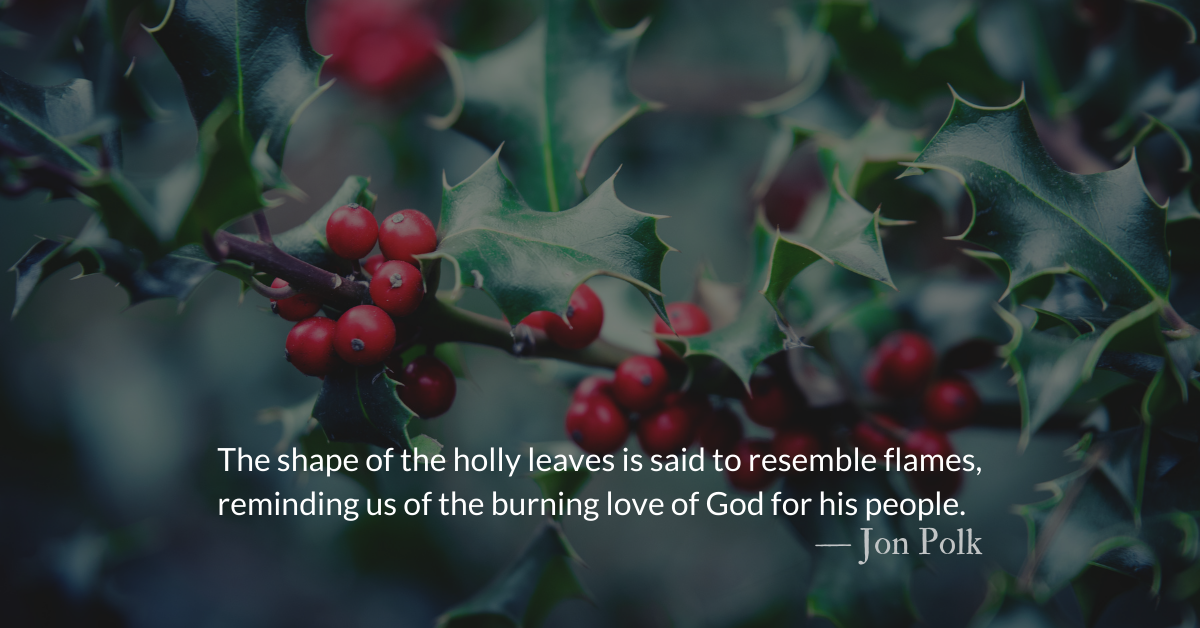 The Holly and the Ivy — Carols of Advent Joy

Hebrews 2.9, 14-15
9 But we do see Jesus, who was made lower than the angels for a little while, now crowned with glory and honor because he suffered death, so that by the grace of God he might taste death for everyone.

14 Since the children have flesh and blood, he too shared in their humanity so that by his death he might break the power of him who holds the power of death—that is, the devil— 15 and free those who all their lives were held in slavery by their fear of death.

Reflection: The Holly and the Ivy — Carols of Advent Joy
By Jon Polk

In Hong Kong, where I live, the celebration of Christmas, while almost completely secular in nature, is not lacking in spectacle. Shopping malls and housing estates construct elaborate, over-the top, displays of Santas and Christmas scenes. Fantastical lighting displays on high-rise buildings in the city center dazzle and amaze. And of course, there is no shortage of chocolates and various Christmas confections!

While I am certainly a fan of doing Christmas up right, it is quite easy to forget that for centuries, Christians celebrated the birth of Christ without utilizing electricity, massive prefabricated scenes, or die-cut signs and images.

There is a beauty in nature’s simplicity that can easily be lost in the holiday extravaganza. Nature’s Christmas decorations abound: evergreen trees, beautiful red poinsettia flowers, mischievous mistletoe, natural flames of candlelight, and garland and wreaths of holly.

The use of holly as a decoration for the winter solstice has its roots in the practices of the ancient Druids, who used it as a symbol of hope, rebirth and even eternal life. As Christians began to formalize the celebration of Christ’s birth, pagan symbols were co-opted and transformed. The Church in medieval times began to endow the plant with decidedly Christian symbolism.

The sharp, pointy leaves representing the crown of thorns worn by Jesus and the bright red berries recalling the drops of blood shed for the salvation of humanity are depicted with honor in the British folk carol from the 18th century, “The Holly and the Ivy.”

The holly and the ivy,
When they are both full grown,
Of all the trees that are in the wood,
The holly bears the crown.

The holly bears a berry,
As red as any blood,
And Mary bore sweet Jesus Christ
For to do us sinners good.

While I generally prefer not to conflate the seasons of Advent and Lent, for they do serve uniquely different purposes on the Church calendar, we can nonetheless take great joy in recognizing the end game of the holy infant who was born to be a King. The shape of the holly leaves is said to resemble flames, reminding us of the burning love of God for his people, a love that would send God’s own Son to die on our behalf.

Let us take great joy in the grace that came down at Christmas. Along with all creation, we can celebrate God’s goodness and love!

The rising of the sun
And the running of the deer,
The playing of the merry organ,
Sweet singing in the choir.

Listen: The Holly and the Ivy by Jon Anderson
Read: Lyrics from Hymnary.org

Divine Hours Prayer: The Request for Presence
O Lamb of God, that takes away the sins of the world, have mercy on me. — Agnus Dei

Read more about End of Year Giving and Supporting our work
Why should you give?
Support gospel-centered biblical interpretation
Support readers in faith-hostile urban environments

Read more about He Invites Us — Love of Advent
The Advent we celebrate in these weeks is the gentle, loving call to be ready.

Take Up Your Mat

John 5.14
Jesus found him at the temple and said to him, “See, you are well again. Stop sinning or something worse may happen to you.”

Reflection: Take Up Your Mat
By John Tillman

The paralytic at the pool is one of the more unusual miracles of Jesus. In most miracles of healing someone comes to Jesus with a request.

The Centurion sent to Jesus on behalf of his servant and the leaders of the Jewish community supported the Centurion’s request due to his kindness to them.

Bartimaeus called out to Jesus over the noise of the crowd, “Son of David, have mercy on me,” and asked directly, “Lord I want to see.”

Jairus, a synagogue leader, humbled himself to come to Jesus openly, begging for his daughter to be healed.

Along the way to Jairus’s daughter, the woman with the issue of blood braved the crushing crowd, to touch Jesus.

But in the case of the paralytic, Jesus seems to initiate everything. Jesus sees the man. He discovers how long he has been there. He singles him out. He questions him. He heals him.

Another common element of other miracles is a moment in which Jesus comments on the person’s faith. That is absent in this account as well. The paralyzed man’s faith is questionable—perhaps so weak that only Jesus could see it.

Sometimes, a miracle is the beginning of a journey of faith instead of the end. Perhaps the reason Jesus told the man to pick up his mat and walk, was so that he would not be able to come back to the same spot in which he had been lying for years.

In the case of the paralyzed man, Jesus isn’t done with him after he is healed. Jesus once more seeks him out. Jesus finds him in the Temple—a place the man was forbidden to go before being healed. There Jesus calls him to repentance and warns him that there are worse things than being paralyzed by a pool for 38 years. Jesus has more for this man then simply taking up his mat and walking. He has more for us too.

Jesus sought us out when we were paralyzed and deformed by sin. Though our faith might have been so small only he could detect it, he healed us, granting us access to God at the Temple. But he isn’t done with us after this miracle. He still seeks us out. To warn us, to call us to continued repentance, to transform our lives.

Jesus isn’t done with us after the miracle of our salvation. When we take up our mat and walk, we are just beginning to follow him in faith.

Pick up your mat and walk. Then take up your cross and follow him.

Prayer: A Reading
Then, speaking to all, he said, “If anyone wants to be a follower of mine, let him renounce himself and take up his cross everyday and follow me.” — Luke 9.23

Read more about Not Just Miracles
Christ’s miracles weren’t entertainment for a crowd or party tricks to show he was a neat prophet. With each miracle Christ demonstrated that restoration beyond what our world is capable of producing will one day come through his reign.

Read more about C.S. Lewis on Miracles
Each miracle writes for us in small letters something that God has already written, or will write, in letters almost too large to be noticed, across the whole canvas of Nature. — C.S. Lewis