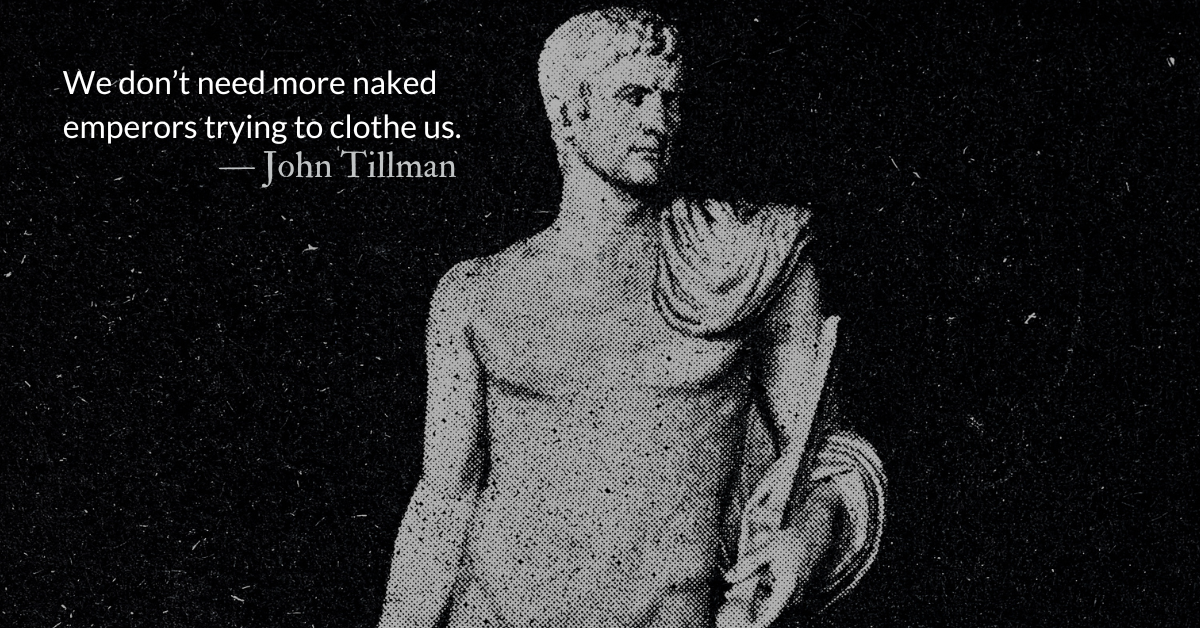 The Empire Has No Clothes

Scripture Focus: Isaiah 20.1-6
1 In the year that the supreme commander, sent by Sargon king of Assyria, came to Ashdod and attacked and captured it—2 at that time the Lord spoke through Isaiah son of Amoz. He said to him, “Take off the sackcloth from your body and the sandals from your feet.” And he did so, going around stripped and barefoot.
3 Then the Lord said, “Just as my servant Isaiah has gone stripped and barefoot for three years, as a sign and portent against Egypt and Cush, 4 so the king of Assyria will lead away stripped and barefoot the Egyptian captives and Cushite exiles, young and old, with buttocks bared—to Egypt’s shame. 5 Those who trusted in Cush and boasted in Egypt will be dismayed and put to shame. 6 In that day the people who live on this coast will say, ‘See what has happened to those we relied on, those we fled to for help and deliverance from the king of Assyria! How then can we escape?’ ”

Image Note: Image is from a 19th century photograph of a statue of Emperor Caligula.

Reflection: The Empire Has No Clothes
By John Tillman

What is Isaiah up to, going naked for three years?

Isaiah isn’t some kooky outsider among the prophets. He is the most intellectually, politically, and relationally elite prophet in Israel or Judah’s history. His writing, had he been British, would be equated with Milton or Shakespeare. Had he been Spanish, Miguel de Cervantes. Had he been American, Ralph Waldo Emerson or Maya Angelou. He was a literary giant.

Isaiah was also accustomed to the company of kings and the halls of power. This isn’t some stunt by an influencer trying to get attention. Isaiah isn’t an edgy comedian or an out-of-town hippie. He’s not a reality television show contestant striving for ratings. To us, this would be like a stodgy, erudite, professor/pastor/poet/statesman suddenly pulling off his bowtie and cardigan…and everything else.

Why would Isaiah portray Egypt’s suffering so graphically?

Judah was seeking protection from powerful political allies. Rather than rely on God, they leaned on Egypt. Like the little boy in Hans Christian Andersen’s tale, Isaiah confronted people with the truth, “The empire has no clothes!” Isaiah’s constant nakedness would not let Judah escape the image of shamed and conquered Egypt. The sight of their political allies being publically humiliated struck fear in their hearts. “See what has happened to those we relied on…how can we escape?”

It is not uncommon for groups, including the church, to lean on “strongmen” who promise protection. Political strongmen can be individuals, small local groups, or national political machines. They say: “Only I can defend you.” “Without me, you’ll lose everything.” “Look what I can do for you.”

We would do well to recognize that these are the same promises made to Christ in the wilderness. “All this I will give you if you bow down.” Every time God’s people or his church have bargained with power for protection, it has ended in shame.

We don’t need more naked emperors trying to clothe us. If anything, we might need to be willing to be stripped and shamed, to remind others that the emperors they trust have no clothes.

Divine Hours Prayer: The Morning Psalm
Lord, how great are your works! Your thoughts are very deep.
The dullard does not know, nor does the fool understand, that though the wicked grow like weeds, and all the workers of iniquity flourish, they flourish only to be destroyed forever; but you, O Lord, are exalted forevermore. — Psalm 92.5-7

Read more about Naked Humility, Unexpected Salvation
May we practice naked humility, humbling ourselves before we are humbled and stripping away pride before it is stripped away.

Read more about No Princes
The princes of this land cannot save us, nor do they intend to.
Their fine bracelets are shackles. 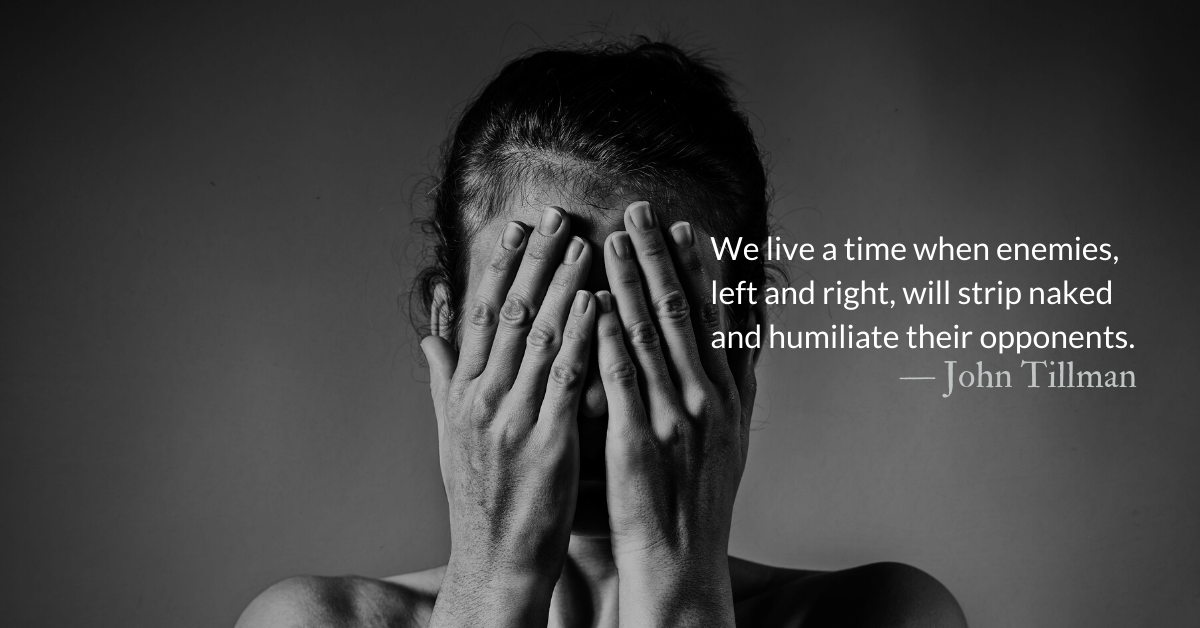 Scripture Focus: Isaiah 19.23-25
23 The Egyptians and Assyrians will worship together. 24 In that day Israel will be the third, along with Egypt and Assyria, a blessing on the earth. 25 The LORD Almighty will bless them, saying, “Blessed be Egypt my people, Assyria my handiwork, and Israel my inheritance.”

When disaster or invasion or pandemic threatened, the people of Israel and Judah expected God to restore them, his chosen people. It isn’t that they did not expect judgment for sin. Rather, they, like many modern Christians, never recognized that the way they were conducting worship and politics was despised by God.

Despite being in denial about it, in a hypothetical exile, they would readily have expected salvation from God. But they would not have expected him to rescue anyone else. Isaiah’s pattern of referring to present judgment while holding on to future hope takes this inconceivable, unexpected turn in the concluding verses of chapter 19.

Isaiah predicts something that no one in the ancient world would think possible. Egypt and Assyria united in worship as brothers in Israel? Unthinkable. These nations were not just Israel and Judah’s enemies—they were enemies of each other. The image Isaiah paints of the three countries—united by a highway, speaking a common language (of Hebrew faith), and attending a common place of worship—was a ludicrous impossibility.

We don’t live in that time just yet. We live a time when enemies, left and right, will strip naked and humiliate their opponents—a time of angrily bared teeth and shamefully bared buttocks. (Isaiah 20.4, 3.24)

How do we remain faithful without resorting to the weapons of shame or the strongarm tactics of anything-goes politics?

Isaiah models acceptance of derision, embodied humility, and expectant hope. Before Judah’s allies, the Egyptians, were humiliated and marched naked into captivity, Isaiah gave up his own freedom and swallowed his pride by going naked for three years, predicting the coming time of violence and shame.

Isaiah also shows us the power of accepting suffering as a discipline, while at the same time setting our hope on the future. Isaiah spends little time celebrating the downfall of others but focuses on Judah’s own religious sins and wretched political ethics.

May we practice naked humility, humbling ourselves before we are humbled and stripping away pride before it is stripped away.

May we expect, anticipate, and celebrate the unexpected grace and mercy of our God poured out on unexpected worshipers.

Read more about Different Kind of Exile
This repost from 2018 cannot be more applicable. Too many of us are ignorantly using our “freedom” to cover up our evil selfish desires in the midst of this COVID-19 response.

Read more about Hope Amidst Destruction
Even among the destruction of what is coming to Judah in Isaiah’s prophecies, there is hope. God promises to place his glory over the remnant, like a tent or shelter.