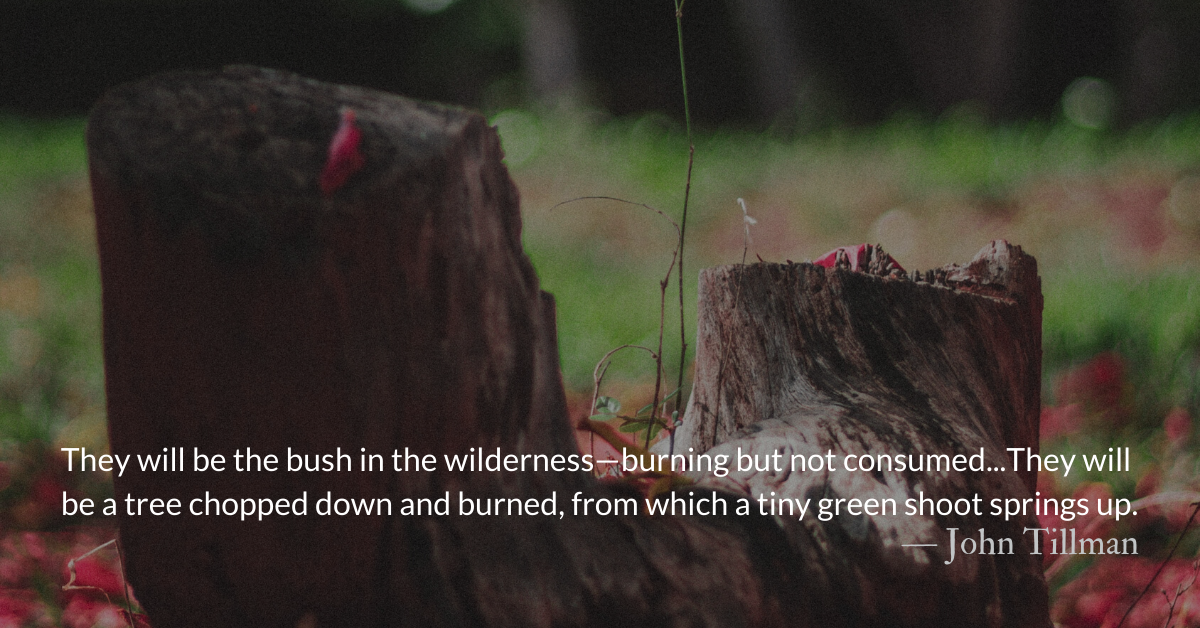 Scripture Focus: Isaiah 4.2-3, 5-6
2 In that day the Branch of the LORD will be beautiful and glorious, and the fruit of the land will be the pride and glory of the survivors in Israel. 3 Those who are left in Zion, who remain in Jerusalem, will be called holy…5 Then the LORD will create over all of Mount Zion and over those who assemble there a cloud of smoke by day and a glow of flaming fire by night; over everything the glory will be a canopy. 6 It will be a shelter and shade from the heat of the day, and a refuge and hiding place from the storm and rain.

Even among the destruction of what is coming to Judah in Isaiah’s prophecies, there is hope. God promises to place his glory over the remnant, like a tent or shelter.

The image Isaiah paints in verse five, a “cloud of smoke by day and a glow of flaming fire by night” has a double meaning. It realistically depicts the smoke that would be seen when the city was burned, and the glow of the fires that would smolder for weeks after the destruction of the Temple and the city by the Babylonian army. But it also is an image of God’s presence, his glory returning. It is a reference to the form of God’s presence with the Israelites on their sojourn in the desert after being freed from oppression in Egypt.

The people will be on the move again, this time moving into exile and suffering instead of away from it. But God will still go with them. The people will be enslaved again with a yoke of bondage. But they will be bonded to God and learn to live as exiles, serving God in spite of, rather than at the direction of a king. They will be purified by fire. This time, not the fire of a desert wilderness, but one of exile and cultural isolation.

They will be the bush in the wilderness—burning but not consumed.
They will be the rock in the desert—hard and hot, yet bursting with cooling springs of living water at God’s command. They will be God’s homeless sojourners again—learning that anywhere is home when they can serve God there. They will be a tree chopped down and burned, from which a tiny green shoot springs up.

For God’s people amidst destruction there is always hope. Amidst collapsing kingdoms there are always a core of survivors. Amidst crumbling moral foundations and corrupt spiritual leadership the Lord always reserves a remnant.

May we be among them. The hopeful. The faithful. The remnant.
May we be a spring, a shoot, a branch reaching up through destruction to the sky.
May we be those who hope not in princes but in our God.
Those who will stand when ten thousand fall at their side.
Those who will not flinch at the terror that stalks at night.
May we be lanterns of light, shining in a darkened land.
May God purify us and spread his glory over us.

Divine Hours Prayer: The Small Verse
The people that walked in darkness have seen a great light; on those who live in a land of deep shadow a light has shone. — Isaiah 9.1

Read more about Choose to Hope in the Cross
The very thing the disciples despaired at, became the source of hope amidst any despair—the cross.

Read more about Hope on a Limb
The king we hope for brings the glory of Heaven to earth in our hearts and expresses his love through our lives.