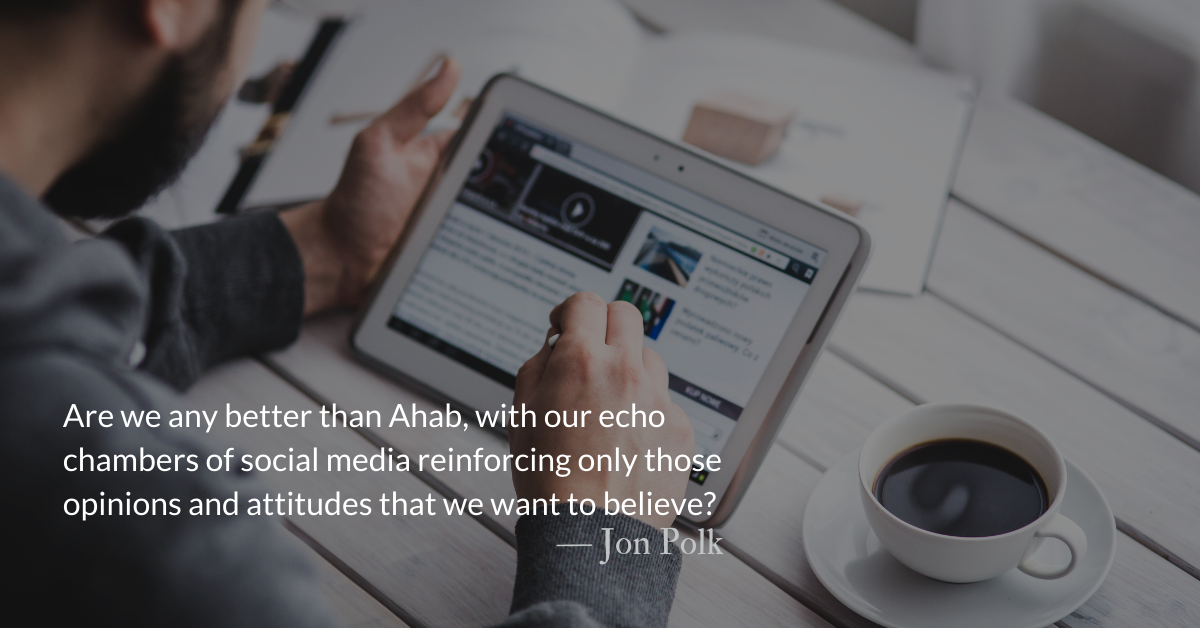 Scripture Focus: 1 Kings 22:6-8
6 So the king of Israel brought together the prophets—about four hundred men—and asked them, “Shall I go to war against Ramoth Gilead, or shall I refrain?”
“Go,” they answered, “for the Lord will give it into the king’s hand.”
7 But Jehoshaphat asked, “Is there no longer a prophet of the Lord here whom we can inquire of?”
8 The king of Israel answered Jehoshaphat, “There is still one prophet through whom we can inquire of the Lord, but I hate him because he never prophesies anything good about me, but always bad. He is Micaiah son of Imlah.”
“The king should not say such a thing,” Jehoshaphat replied.

Reflection: A King’s Vanity and a Slap in the Face
By Jon Polk

It’s official. Ahab was the worst king of Israel.

The stinging indictment is made in 1 Kings 16, “Ahab son of Omri did more evil in the eyes of the Lord than any of those before him.”

Why does Ahab deserve this dubious distinction? Aside from implementing Baal worship and the shocking murder of Naboth, Ahab was notorious for antagonistic relations with God’s prophets.

Ahab tussled with Elijah on several occasions, but 1 Kings 22 records an encounter with the sharp-tongued Micaiah. The scene opens with Ahab attempting to convince king Jehoshaphat of Judah to join him in attacking Aram to reclaim the land of Ramoth Gilead. Jehoshaphat suggests that they seek God’s counsel, so Ahab calls in all 400 of his official prophets.

Led by the overly dramatic Zedekiah, who had crafted iron horns representing victory, the king’s prophets unanimously proclaimed that the Lord would give the land to Ahab in battle.

Jehoshaphat was not convinced and saw through the blatant pandering of those false prophets. He asked if there were still any true prophets around.

Ahab’s response sums up his desire to be surrounded by “yes” men. “There is still one prophet through whom we can inquire of the Lord, but I hate him because he never prophesies anything good about me.”

That prophet, Micaiah, is asked if they should go to war. He quipped sarcastically, “Sure, go ahead, attack and be victorious,” prompting Ahab to insist that Micaiah actually tell him the truth from God.

So he did: War with Aram will not end well, Israel will be sacked, Ahab will be killed, and by the way, all those other prophets were filled with a deceiving spirit.

Micaiah’s prophecy of doom earned him a slap across the face from the sanctimonious Zedekiah.

Alas, the king decided to make war anyway, and, lo and behold, everything happened exactly as Micaiah said it would.

Are we any better than Ahab, with our echo chambers of social media reinforcing only those opinions and attitudes that we want to believe? Do we find enjoyment in metaphorically slapping the faces of our opponents, real or imagined? Do we surround ourselves with voices that only tell us what we want to hear?

Let us learn from the foolish Ahab that we must not only be able to discern truth from error but we should also not discount the voice of God simply if it comes to us from sources we may find disagreeable. Let the hearer understand.

Divine Hours Prayer: The Call to Prayer
Search for the Lord and his strength; continually seek his face. — Psalm 105.4

Read more about “Trivial” Sin
Ahab is notorious for promoting the worship of Baal and Asherah…For Ahab, these were “trivial”

More and More and Less and Less :: Guided Prayer

Scripture Focus: ‭‭1 Thessalonians‬ ‭4.
We instructed you how to live in order to please God, as in fact you are living. Now we ask you and urge you in the Lord Jesus to do this more and more.

Reflection: More and More and Less and Less :: Guided Prayer
By John Tillman

Paul uses the term “more and more“ twice in the fourth chapter of his letter to the Thessalonians. Both times he is pleased with where the believers are currently, yet hoping for and encouraging them toward more.

Sanctification is easy to confuse with moralism.

Through moralism, we transform scriptures into affirmations of our faithfulness and condemnation of others’ sinfulness. In moralism, we focus on others lives, measuring ourselves against them instead of scripture.

Sanctification and moralism both introduce change, but only one is spiritual and is powered by the gospel. Let us pray this prayer over the weekend that we may not be more “moral.” But that, instead, we may be more like Christ.

More and More and Less and Less
Gracious Father, we know…

We cannot do “more and more” of the things Christ calls us to without doing “less and less” of some other things.

More and more of Christ in our life means less and less of us. He must become greater and we must become less.

We know that we will be at our happiest, at our most fulfilled, and at our most true self when we continually surrender more and more to the leading of the Holy Spirit.

Divine Hours Prayer: The Greeting
O Lord, I cry to you for help; in the morning my prayer comes before you. — Psalm 88.14

Read more about Christ, the True Hero
We are not the saviors, but the ones in need of saving. It is Christ, not us, who is the hero of our cities and our world.

Read more about The Law that leads to Grace :: Guided Prayer
We cannot live by the Law. If we could, then Christ’s death was for no purpose.