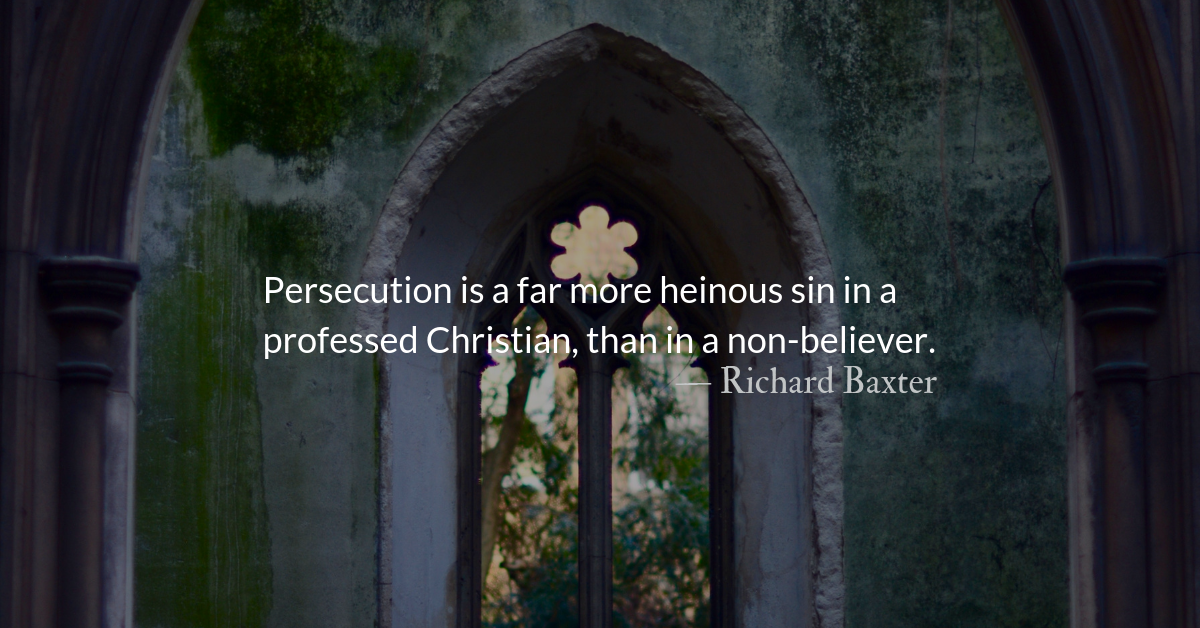 What Is Persecution? :: Throwback Thursday

“If I said something wrong,” Jesus replied, “testify as to what is wrong. But if I spoke the truth, why did you strike me?”

From John:
Richard Baxter knew a thing or two about persecution—especially persecution of Christians by other Christians. As a moderate during the English Civil war he found himself persecuted by both extremes, including being barred from preaching (he preached anyway) and being imprisoned in 1665 for 18 months.

Reflection: What Is Persecution? :: Throwback Thursday
By Richard Baxter (1615-1691)

Three things then go to make up persecution.

1. That it be the hurting of another, in his body, liberty, relations, estate, or reputation.

2. That it be done injuriously, to one undeserving.

3. That it be for the cause of religion or of righteousness, that is, for the truth of God which we hold or utter; or for the worship of God which we perform; or for obedience to the will of God revealed in his laws.

There are divers sorts of persecutions.

There is a persecution which is openly professed to be for the cause of religion, and there is a hypocritical persecution when the pretended cause is some odious crime, but the real cause is religion, or obedience to God. This is the common persecution, which nominal Christians exercise on serious Christians, or on one another.

It is a sign of great uncharitableness and cruelty, when men can find in their hearts to persecute others for little things; and it is a sign of a heart that is true to God, and very sincere, when we would rather suffer any thing from man, than renounce the smallest truth of God, or commit the smallest sin against him, or omit the smallest duty, when it is a duty.

Persecution is a far more heinous sin in a professed Christian, than in a non-believer. For they do it according to the darkness of their education, and the interest of their party, and the principles of their own beliefs. But for a Christian to persecute Christianity, and one that professes to believe the gospel, to persecute the preachers and serious followers of the doctrine of the gospel; this is so near that sin which is commonly said to be the unpardonable sin against the Holy Ghost, that it is not easy to perceive a difference. If I did consent to that description of the unpardonable sin, I should have little hope of the conversion of any one of these. They make up such a mixture of hypocrisy, and impiety, and cruelty, as shows them to exceed all ordinary sinners, in malignity and misery.

Lastly, remember that Christ takes all that is done by persecutors against his servants for his cause, to be done as to himself, and will accordingly in judgment charge it on them. Remember, that it is Christ, whom they hate, deride, and persecute.

*Edited for length and language updated. A Sum of Practical Theology and Cases of Conscience, Richard Baxter

Prayer: The Refrain for the Morning Lessons
The Lord has pleasure in those who fear him, in those who await his gracious favor.  — Psalm 147.12

Read more from Richard Baxter: Lament the Effects of Hard-Heartedness
Take notice of the doleful effects of hard-heartedness in the world. This fills the world with wickedness and confusion, with wars and bloodshed; and leaves it under that lamentable desertion and delusion, which we see in the majority of the earth.

Read more from Richard Baxter: Theology is Like a Watch
Baxter refers to theology as an intricate watch—meaningless unless all the parts are in proper order: “…you must see that every part is in its proper place, or else it will not go.”