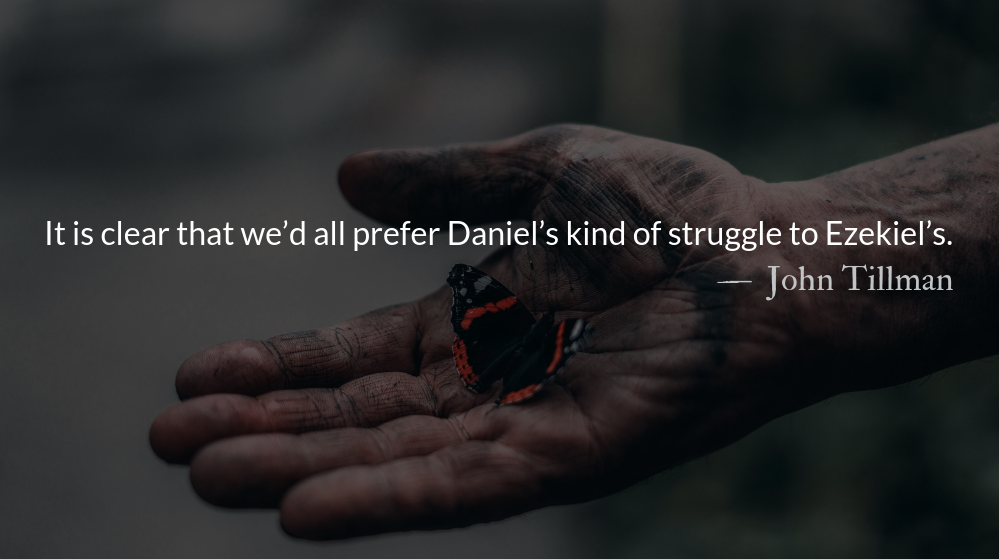 Daniel 1.8
…he asked the chief official for permission not to defile himself this way.

Pastors and teachers regularly turn to Daniel as an example of how to live undefiled in a culture that is radically opposed to faith.

Consider that the story in today’s reading, about Daniel’s struggle to eat a diet of vegetables and water instead of the “rich food” from the king’s table, happens in the same country where Ezekiel begs God not to force him to defile himself by eating food cooked over human feces.

For Daniel and his friends, God gifts them with strength, health, and intelligence far beyond the other candidates, and this event is the beginning of their rise to prominence and power. For Ezekiel, God relents and allows him to cook his food over animal feces instead. It’s no wonder we teach about Daniel’s story more often.

I’ve never heard of a church doing an “Ezekiel fast” but “Daniel fasts” have enjoyed massive popularity. Some even suggest that this is how Christians should eat year round. It is clear that we’d all prefer Daniel’s kind of struggle to Ezekiel’s.

In a way, being personally defiled through their experience was a part of the exiles’ punishment from God and a path to their repentance and healing.

Our outer circumstances may not be in our control as exiles. We may be in service to an evil government as Daniel and his friends are. We may be sexually exploited as Esther was. We may be forced to swallow unclean things as Ezekiel was.

In all circumstances, we must seek God’s guidance as we attempt to live in way that is pleasing to him. And at times, like Daniel, we must beg for permission from governments and employers to follow our consciences. That the government may not relent, and we may be forced to eat what is given is a part of being an exile.

As we live as exiles we must seek God to determine, as Daniel did, where the lines may be drawn for us and how we can best adapt to keep our hearts pure, even when everything we touch or interact with in our culture is defiled.

Prayer: The Morning Psalm
Mark those who are honest; observe the upright; for there is a future for the peaceable…The Lord will help them and rescue them; h will rescue them from the wicked and deliver them, because they seek refuge in him. — Psalm 37.37, 40

Additional Reading
Read More about In Denial about Greed and Power
If there is anything that can still be shocking in today’s world, it is that we still don’t fully admit or understand the destructive nature of the sins of greed and power.

Read More about The Idol of Immorality, Impurity, and Greed
Paul reveals to us that what is truly at the root of sexual immorality, is exactly the same thing that is at the root of greed—selfishness.