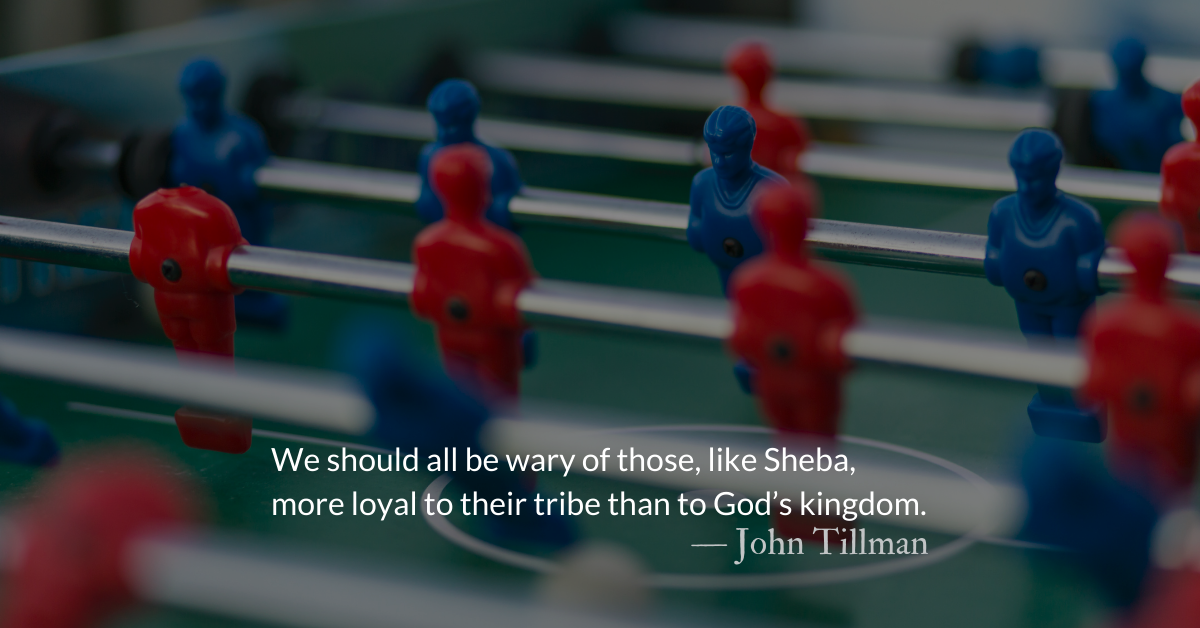 Scripture Focus: 2 Samuel 20.8-10
8 While they were at the great rock in Gibeon, Amasa came to meet them. Joab was wearing his military tunic, and strapped over it at his waist was a belt with a dagger in its sheath. As he stepped forward, it dropped out of its sheath.

9 Joab said to Amasa, “How are you, my brother?” Then Joab took Amasa by the beard with his right hand to kiss him. 10 Amasa was not on his guard against the dagger in Joab’s hand, and Joab plunged it into his belly, and his intestines spilled out on the ground. Without being stabbed again, Amasa died. Then Joab and his brother Abishai pursued Sheba son of Bikri.

2 Corinthians 13.10-12
10 This is why I write these things when I am absent, that when I come I may not have to be harsh in my use of authority—the authority the Lord gave me for building you up, not for tearing you down.
11 Finally, brothers and sisters, rejoice! Strive for full restoration, encourage one another, be of one mind, live in peace. And the God of love and peace will be with you.
12 Greet one another with a holy kiss.

Sheba’s insurrection was an opportunistic power grab. Sheba was mad that someone from his tribe wasn’t still in charge. So he said loudly of David, “Not my king!” (Sounds eerily familiar…)

Sheba belittled David by calling him “Jesse’s son” and played into familial hatreds and inter-tribal bitterness that still was problematic between Saul’s tribe, the Benjamites, and David. Initially, eleven of the twelve tribes followed him.

David’s kingdom was politically and militarily precarious. David’s new general, Amasa, was the former general of Absalom’s rebellion. David’s choice of Amasa may have been a sly political move, but it failed.

Amasa fails to gather troops and stop Sheba and the Bible is unclear on why. David feared that Sheba would escape to a fortified town and, because of Amasa’s delay, that is exactly what happened. It seems likely Amasa’s delay was purposeful. This is why David felt the need to put his trust back in the “Sons of Zeruiah.”

Joab certainly treats Amasa as if he was a threat, but Joab treats everyone that way. Was Joab dispensing justice to a traitor or simply murdering his rival? It’s probably both.

Given time, Sheba’s rebellion could have grown, but the insurrection finally ended because of the words of a wise woman. The wise woman of Abel, with her diplomacy, bravery, and wisdom brought an end to Joab’s campaign and Sheba’s insurrection.

We should all be wary of those, like Sheba, more loyal to their tribe than to God’s kingdom. Divisive leaders appeal to our tribal instincts and desire for power. They belittle opponents and call for conflict and conquest. This can happen in countries, in denominations, and in churches.

It is difficult to make peace with insurrectionists. They aren’t interested. In a world fluent in violence, when we speak of peace, it is “an unknown tongue.” Being a peacemaker may sometimes mean silencing or excluding those who only want war. But with God’s grace, may we take our cue more from Paul, than from Joab.

Joab uses a kiss as an opportunity to knife Amasa in the belly. From a worldly perspective, Joab’s way seems like the only way. With a holy kiss, Paul encourages us to strive for full restoration. This may be something that, humanly speaking, seems impossible. However, with God all things are possible. May we learn to follow Paul’s “more excellent way” and replace retribution with grace.

Divine Hours Prayer: The Refrain for the Morning Lessons
I sought the Lord, and he answered me and delivered me out of all my terror. — Psalm 34.4

Read more about Grace Displaces Retribution
The kind of humility and gracious forgiveness often shown by David is as greatly out of place today as it was in his own time.

Read more about Dealing with Joab
When I was a younger man, I admired Joab. I thought Joab saved David. I was wrong.