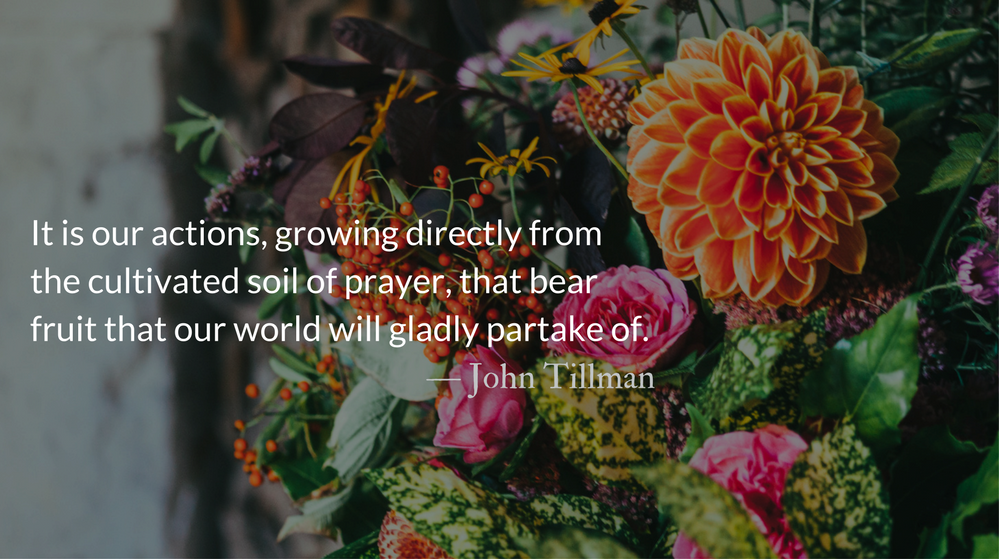 Scripture: 1 Timothy 2.1-2
I urge, then, first of all, that petitions, prayers, intercession and thanksgiving be made for all people—for kings and all those in authority, that we may live peaceful and quiet lives in all godliness and holiness.

Prayer is not a passive, calm, quiet practice. — Tim Keller

In our world, there is now pushback against even saying that we will pray over a situation. Thoughts and prayers as a hashtag has become a philosophical battlefield where people of faith and people frustrated by people of faith clash about the efficacy of prayer and the pointlessness of faith without works. (The language is, of course, not that academic.)

The cultural version of this type of empty prayer is engaging in the equally empty gesture of clicktivism—liking or sharing a post about an issue, but doing nothing substantive to address it. In a way, those who are decrying thoughts and prayers are praying unknowingly—they are calling out, they know not to whom, for real, tangible change and action.

The culture Paul was in prayed a lot. Prayer was everywhere. But in no religion was it so personal and direct as in Christianity. The type of prayer that Paul practiced and taught confronted both modern and ancient cultural assumptions and was attractive, not repulsive, to his culture. How?

One reason we see is that the kind of prayer that Paul engages in is fruitful in creating action—good desires and the deeds that follow. Paul’s prayers were not just words, but will and work. According to Paul deeds are prompted by faith, and faith is fueled by prayer life.

It is our actions, growing directly from the cultivated soil of prayer, that bear fruit that our world will gladly partake of.

When we follow the lead of godly, broken-hearted prayer, we will find ourselves acting in undeniably loving ways (against which there is no law), seeking out the lost, marginalized, and broken with Christ’s love, and suddenly realizing that people are no longer repelled by our thoughts and our prayers.

The Greeting
Seven times a day do I praise you, because of your righteous judgments. — Psalm 119.164