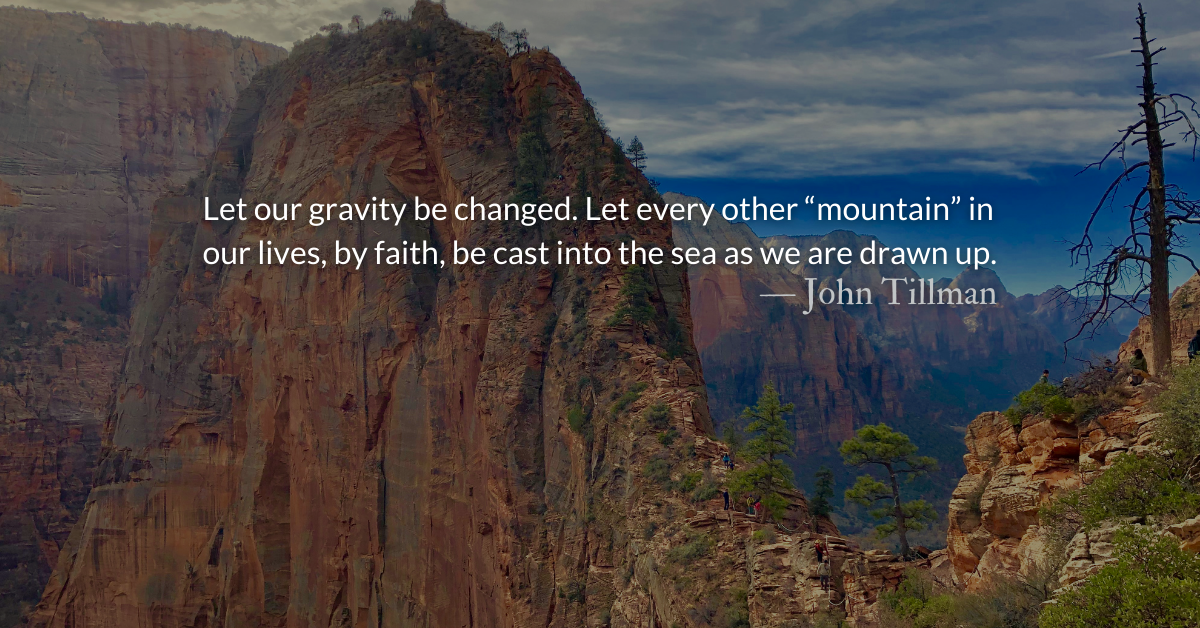 The Mountain of the Lord

Scripture Focus: Isaiah 2.1-2
1 This is what Isaiah son of Amoz saw concerning Judah and Jerusalem:
2 In the last days
the mountain of the Lord’s temple will be established
as the highest of the mountains;
it will be exalted above the hills,
and all nations will stream to it.
3 Many peoples will come and say,
“Come, let us go up to the mountain of the Lord,
to the temple of the God of Jacob.
He will teach us his ways,
so that we may walk in his paths.”
The law will go out from Zion,
the word of the Lord from Jerusalem.

Matthew 17.1-2
1 After six days Jesus took with him Peter, James and John the brother of James, and led them up a high mountain by themselves. 2 There he was transfigured before them. His face shone like the sun, and his clothes became as white as the light. 3 Just then there appeared before them Moses and Elijah, talking with Jesus.
4 Peter said to Jesus, “Lord, it is good for us to be here. If you wish, I will put up three shelters—one for you, one for Moses and one for Elijah.”

Music: “Mountains” — Interstellar, by Hans Zimmer
Reflection: The Mountain of the Lord
By John Tillman

Mountains were believed to be places where heaven and earth overlapped or touched. Every religion in the ancient near east put temples on hills. Even if the “temple” was just a hasty shrine under a spreading tree. (2 Kings 17.10; Deuteronomy 12.2) Peter wanted to set one up for Jesus after the Transfiguration.

If there weren’t grand enough mountains, people built them. Towers, pyramids, and ziggurats reached toward not just the stars but the heavens.

Today, we don’t believe mountains touch heaven. Not exactly. But we do call our towers “skyscrapers” and we come close to worshiping those who dwell or work there. We are not so different from the ancients as we think.

Isaiah foresaw the mountain of God’s temple exalted and “established as the highest of the mountains.”

Jerusalem is already situated on a high point. Mount Zion’s elevation is 2500 feet. Geographically, however, it is not the highest mountain in the region. It’s neighbor, The Mount of Olives, from which Jesus wept over the city, tops it by 200 feet.

Is Isaiah speaking of a cataclysmic geological event, raising Zion higher than Everest?

Isaiah is speaking theologically, not geologically, but that does not mean there has not been a cataclysmic event. The cataclysm that overthrew the powers of this world was the cross. (Colossians 2.15) On the cross, Jesus descended to the lowest place and was raised to the highest. Jesus is the mountain, the Temple, that is exalted over all other gods, rulers, and authorities. (Ephesians 1.20–22)

We have only a foretaste of Isaiah’s promises. Jesus is exalted, yet we still languish. Humans glorify and enrich themselves through oppression. Powers rule over us. However, Isaiah’s promises will come to fullness. Every human leader holding themselves up for worship will have their legs cut from beneath them. Every oppressor will be thrown down. Every spiritual power will be crushed by the heel of our God.

In many images of the City of God, a river is depicted flowing from the city. In Isaiah we see a stream flowing uphill instead of down. It is a stream of people, from all nations, who are being drawn, against the gravity of this world, to Jesus.

Let our gravity be changed. Let every other “mountain” in our lives, by faith, be cast into the sea as we are drawn up.

“Come. Let us go up to the mountain of the Lord.”
Divine Hours Prayer: The Call to Prayer
Sing praise to the Lord who dwells in Zion; proclaim to the peoples the things he has done. — Psalm 9.11

Read more about Way of the Cross
How uncomfortable does the suffering servant make you?
Everyone rejected the suffering Christ—even the closest of his disciples.