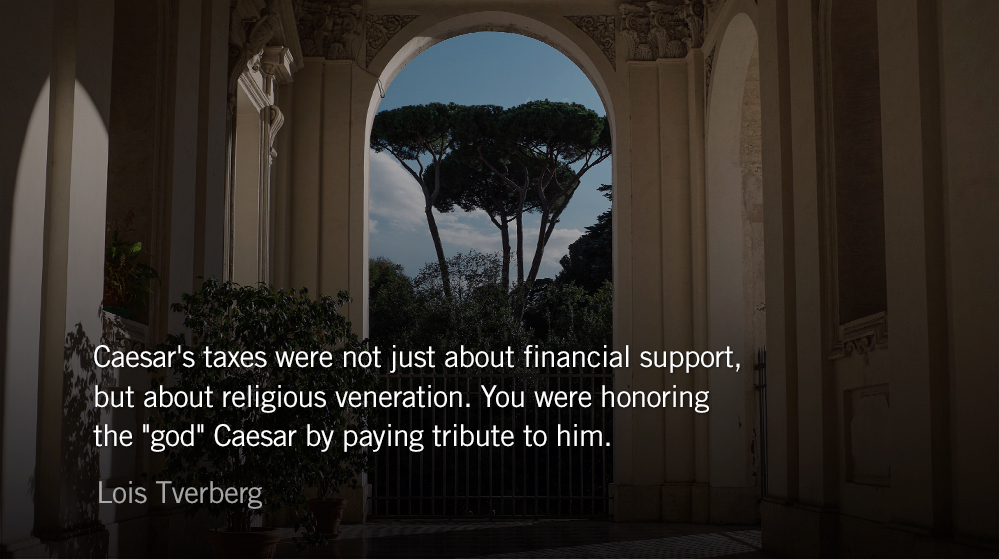 “Is it lawful to pay taxes to Caesar, or not?” Though the Pharisees’ question was designed to ensnare Jesus, they likely formed it from legitimate concerns in their day. How should a faithful person live under the rule of a pagan government?

The stakes couldn’t be higher during Jesus’ day. Taxes were more than financial support of corrupt systems, they were worship. In Walking in the Dust of Rabbi Jesus Lois Tverberg reimagines Jesus’ interaction with the religious elite:

As the priest’s hand fumbled through the folds of his robe to withdraw a coin, guffaws arose from the crowd. As the shiny disk glinted in the sun, the realization dawned on him that he had just revealed his own hypocrisy. Denarii were strictly forbidden from the Temple, because they bore Caesar’s blasphemous claim to be divine.

Some purists, like the Essenes, refused to touch or even look at this particular coin. But the cleric had no qualms about carrying these pagan money pieces in his pocket. The man’s face reddened as he saw how easily the Galilean rabbi exposed his insincerity.

Now it was Jesus’ disciples turn to smirk. With a look of feigned innocence, Jesus inquired, “Whose image, whose likeness is on this coin?” Caesar’s, of course. It was precisely that image that made the coin forbidden in the Temple. No graven images were permitted, especially not the likeness of an emperor who insisted that he be worshiped as deity. Caesar’s taxes were not just about financial support, but about religious veneration. You were honoring the “god” Caesar by paying tribute to him.

In his reply we see the length at which Jesus believed the words the Spirit would inspire Paul to write: “Let every person be subject to the governing authorities. For there is no authority except from God, and those that exist have been instituted by God.”

More importantly we see that Christ’s concern was far greater than our worldly battles. Tverberg concludes:

Caesar’s face is stamped on the coin because the coins are Caesar’s. They belong to him, they bear his image. Jesus was pointing out that because God had stamped his image on us, God’s reign was far beyond anything Caesar could imagine—it is over all of humanity. Humans are God’s coins, meant to be spent on his world, proclaiming God’s kingdom wherever we circulate.