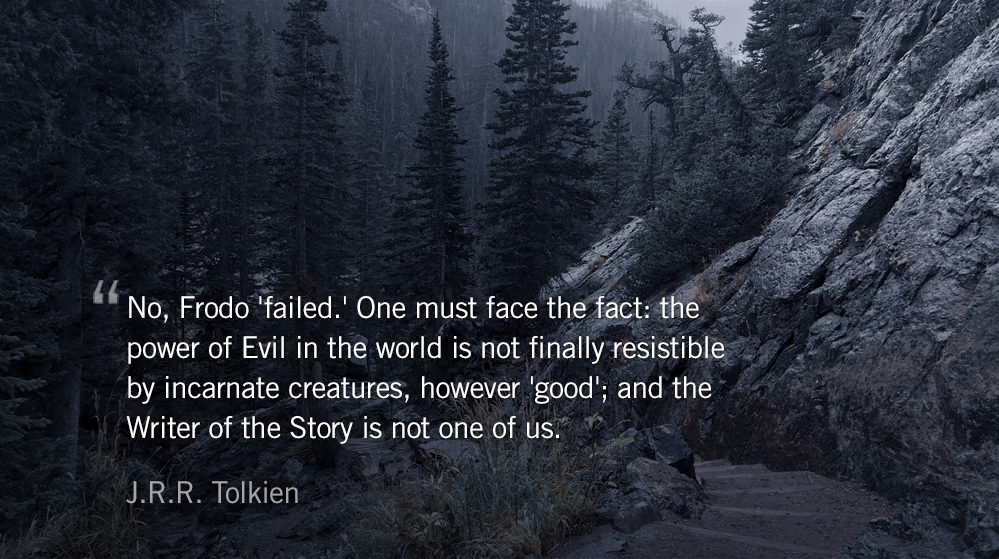 By J.R.R. Tolkien
If you re-read all the passages dealing with Frodo and the Ring, I think you will see that not only was it quite impossible for him to surrender the Ring, in act or will, especially at its point of maximum power, but that this failure was adumbrated from far back.
He was honored because he had accepted the burden voluntarily, and had then done all that was within his utmost physical and mental strength to do. He (and the Cause) were saved—by Mercy : by the supreme value and efficacy of Pity and forgiveness of injury.
1 Corinthians 10.12-13 may not at first sight seem to fit – unless ‘bearing temptation’ is taken to mean resisting it while still a free agent in normal command of the will. I think rather of the mysterious last petitions of the Lord’s Prayer: Lead us not into temptation, but deliver us from evil. A petition against something that cannot happen is unmeaning.
There exists the possibility of being placed in positions beyond one’s power. In which case (as I believe) salvation from ruin will depend on something apparently unconnected: the general sanctity (and humility and mercy) of the sacrificial person.
I did not ‘arrange’ the deliverance in this case: it again follows the logic of the story. (Gollum had had his chance of repentance, and of returning generosity with love; and had fallen off the knife-edge.)
No, Frodo ‘failed.’ It is possible that once the ring was destroyed he had little recollection of the last scene. But one must face the fact: the power of Evil in the world is not finally resistible by incarnate creatures, however ‘good’; and the Writer of the Story is not one of us.
*Excerpt from the draft of a letter to Miss J. Bum, July, 26 1956. From The Letters of J.R.R. Tolkien (Mariner Books, 2000).

Give a Year-End Gift Now.

Your tax-deductible donation can help us increase Scripture engagement in cities around the world. Support our work today.