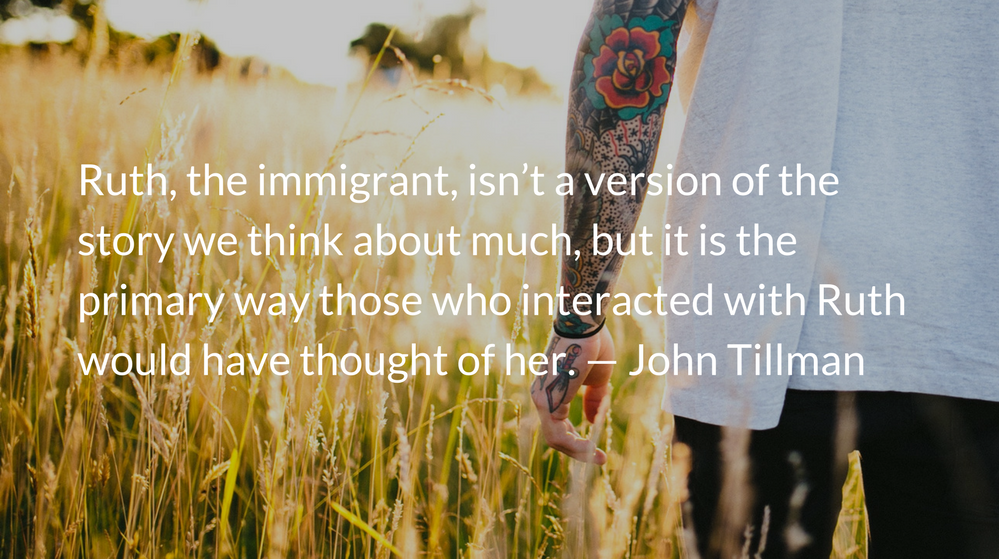 Scripture: Ruth 2.6
The overseer replied, “She is the Moabite who came back from Moab with Naomi.

Ruth’s story is attractive for those who long for a quid-pro-quo relationship between their good deeds and God’s blessings.

This line of teaching focuses on Ruth’s hard work to aid Naomi, but usually skips the antecedent action in which Ruth had a controversial interracial marriage with a Jewish immigrant and, following his death, chose to abandon her biological family, her culture, her country, and her religion to seek a home among a people who had pledged to wipe out her race in the previous generation, but hadn’t quite succeeded yet.

Ruth, the immigrant, isn’t a version of the story we think about much, but it is the primary way those who interacted with Ruth would have thought of her. With our gift of hindsight, we associate Ruth with her great-grandchild, Israel’s greatest earthly king, David. But to everyone else, Ruth was “the Moabite.” She would have been seen as a dangerous immigrant—one of “those women” the law warns Israel about, who would seduce and lead Israel into sin. By remembering that Ruth is an immigrant, we get a clearer picture of her story.

More important than showing us the value of hard work, or kindness, or having a successful marriage, Ruth shows us how God’s grace helps us immigrate from our own selfish kingdoms to the kingdom of God through repentance. Ruth shows us how to turn our back on our self and what we have known, to abandon what is best for us by the world’s standard, and to turn our face toward a new God and a new kingdom.

Ruth becomes a member of a new community and, by grace, she joins the lineage of a new family—the family of Jesus. Our place in Jesus’ family is as much by grace as Ruth’s place in His genealogy. Ruth is an example of God’s grace extending, through Israel, to the Gentiles, and eventually, to us.

Boaz, the son of Rahab, the prostitute of Jericho, and Ruth, the Moabitess, make a life together in the promised land. This is a unique picture of God’s mercy and grace. By rights they shouldn’t be here. Yet they not only live, they flourish, and they foreshadow the Gospel spreading beyond Israel to the nations.

The Morning Psalm
Hallelujah! When Israel came out of Egypt, the house of Jacob from a people of strange speech — Psalm 114