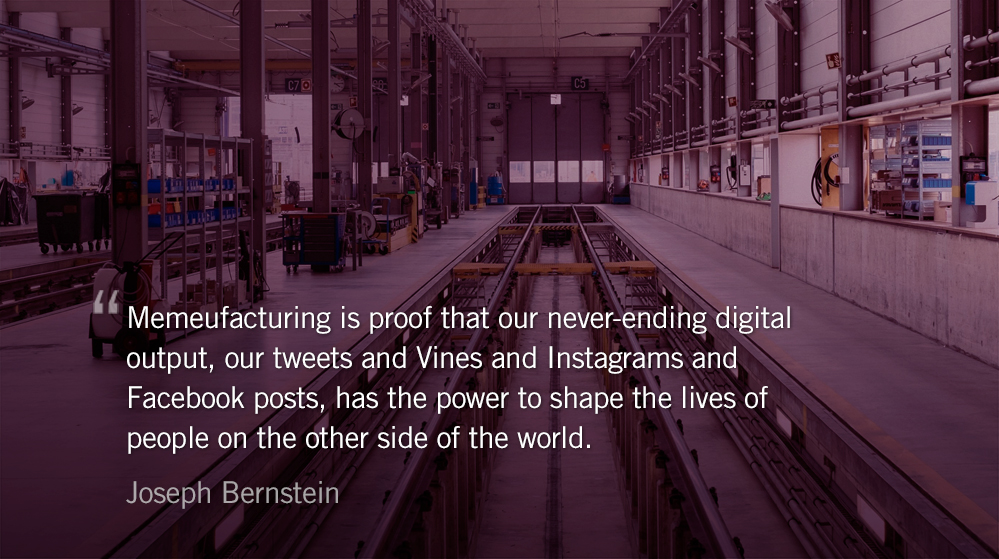 If we cause a tree to be chopped down in a forest—but the forest is on the other side of the world, so we won’t necessarily hear it—will we care? This is the cultural way to ask the biblical question: “Am I my brother’s keeper?” Another way yet; are we responsible for the pain inflicted on others because of our emotions and desires?

Up until 1979 the city of Shenzhen, which links Hong Kong to mainland China, was home to 15,000 people. Today it has exploded to a population of 15 million—almost twice the size of New York City. The growth has primarily been driven by its designation as a “Special Economic Zone,” allowing corporations to operate outside of Communist business restrictions.

The now-smog-covered metropolis is home to hundreds of electronic manufacturing companies. Chances are, if you use a smartphone, television, camera, copy machine, or computer on a regular basis you carry with you the fingerprints of the citizens of Shenzhen.

The cause and effect of consumerism is rarely as clear as in Joseph Bernstein’s piece for BuzzFeed on the connection between western consumer whims and the quality of life of Chinese assembly workers in Shenzhen.

The story of manufacturing the ever-changing wishes of westerners is the story of eking out a living. “When we see a demand, we change our business direction; it is about survival.” a general manager at a factory in Shenzhen said. A young saleswoman echoed his sentiment: “Last year the selfie stick was very popular… But we need to change with the market or we’ll die.”

Bernstein examines one of the most popular electronic toys this Christmas: the hoverboard—a two-wheel, self-balancing device made popular by celebrities and social media.

The hoverboard industry that has unfurled (in China) hands us the playthings of social-media-driven seasonal diversion. It is the funhouse mirror reflection of the viral internet, the metal-and-cement consequence of our equally flexible commercial hype machine. It happened before with selfie sticks, and before that with drones. It may soon happen with virtual reality headsets and body-worn police cameras. — Joseph Bernstein

The average assembly worker at Foxconn and Pegatron (who manufacture for Apple, Samsung, Amazon, Dell, HP, Blackberry, and many more) works a 60-hour workweek, lives in a dorm with seven other people, and makes $3,800/year.

A BBC undercover report of Apple’s iPhone 6 production uncovered 12-hour work days and documented workers regularly falling asleep on the assembly line. The Hong Kong Free Press also reported a major factory closing on Christmas day: over 2,000 workers lost their jobs last week, all of whom are owed back wages.

Memeufacturing is proof that our never-ending digital output, our tweets and Vines and Instagrams and Facebook posts, has the power to shape the lives of people on the other side of the world. — Joseph Bernstein

“Memeufacturing,” a term Bernstein coined, is the production of electronics in response to their success online. On the western side of the equation we consume without regard to consequence. “It is understood that hoverboards come from China in the same way it is understood that Spam comes from pigs: vaguely and glibly,” Bernstein quips.

The role of faith in such a world cannot be understated. If we are people who believe prayer has power we would find ourselves interceding for the millions of people marginalized by unfettered consumerism. If we believe part of Christ’s path is sacrifice we would curtail the desires the social web and advertising arouse in our souls. Most importantly, as faith communities, we would work out how to love our global-neighbors as we love ourselves—we would become our brother’s keeper.