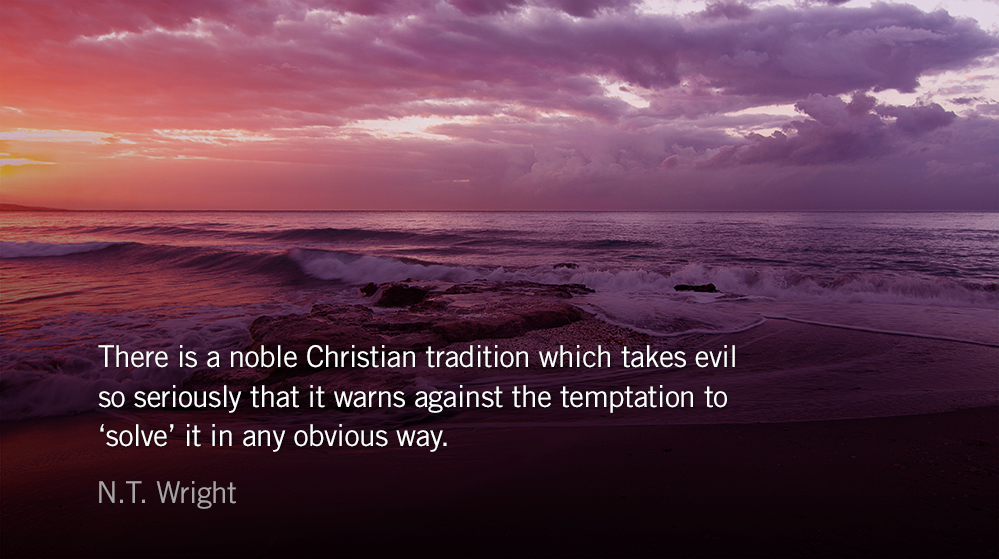 More than a Solution

May my accusers be put to shame and consumed; with scorn and disgrace may they be covered who seek my hurt. But I will hope continually and will praise you yet more and more. — Psalm 71.13-14

“There is a noble Christian tradition which takes evil so seriously that it warns against the temptation to ‘solve’ it in any obvious way,” N.T. Wright explains in his book Evil and the Justice of God. “We cannot and must not soften the blow; we cannot and must not pretend evil isn’t that bad after all. That is the way back to cheap modernism.” Wright believes modernism exchanged the Christian view of evil and justice for a straw man:

Classical Judaism and classical Christianity never held an immature or shallow view of evil, and it is one of the puzzles of the last few centuries who mainstream philosophers from Leibniz to Nietzsche could think and write about the problem of evil as though the Christian view could be marginalized or dismissed with cheap caricature.

How do we reclaim this nuanced view of evil and justice? We must be careful not to oversimplify what the authors of the Psalms sought as they cried out to God. “You will increase my greatness and comfort me again,” the prayer of Psalm 71, is not a longing for suburban tranquility. When confronted with the brutality of evil in his life, the psalmist joins the centuries-long ache of Scripture for God to restore the world for which humanity was created.

Some of this return, we must know, is a depth and severity of justice we are unable to dispense on our own—yet full restoration must go beyond this. The problem of evil isn’t solved until all that was lost has been returned. N.T. Wright concludes:

God’s justice is not simply a blind dispensing of rewards for the virtuous and punishments for the wicked, though plenty of those are to be found on the way. God’s justice is a saving, healing, restorative justice, because the God to whom justice belongs is the Creator God who has yet to complete his original plan for creation and whose justice is designed not simply to restore balance to a world out of kilter but to bring to glorious completion and fruition the creation, teeming with life and possibility, that he made in the first place. And he remains implacably determined to complete this project through his image-bearing human creatures.