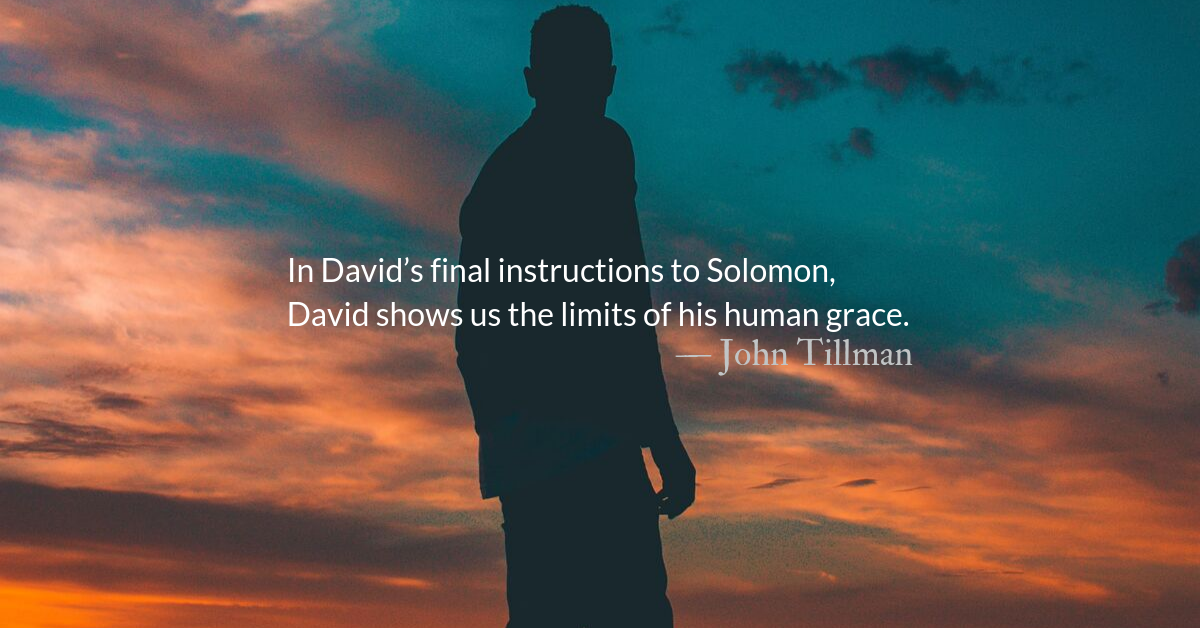 Scripture Focus: 1 Kings 2.8-9
“‘When he came down to meet me at the Jordan, I swore to him by the Lord: ‘I will not put you to death by the sword.’ But now, do not consider him innocent. You are a man of wisdom; you will know what to do to him. Bring his gray head down to the grave in blood.”

One could read the scripture through the lens of any major figure of the Bible. The religious leaders of Jesus’ day had chosen Moses as their lens. But it would be just as possible for them, or us, to look at scripture with a Davidic lens.

Today’s passage highlights one reason we use Christ as our lens for viewing scripture. Because every other lens is flawed.  Moses, and David after him, were sinful, flawed leaders.

Last week, we reflected on the grace God grants to us. This week, in our reading of David’s final instructions to Solomon, David shows us the limits of his human grace. David had been gracious and forgiving to many people during his lifetime. But some will find out that the grace extended to them died with the king.

David, when dealing with these offenders, had seemed magnanimous, humble, forgiving, and gracious. But on his deathbed, David sounded hurt, petty, vindictive. David discussed this unsettled and unsettling business with Solomon. Many parents leave their children valuable possessions and wisdom. Some leave only bad debts and inherited enemies. David, left Solomon a mix of things, including a hit list.

David is being protective. There are good and practical reasons for David’s instructions. Solomon is young and may be seen as weak. He is the child of a woman with great influence and power, whom powerful men may wish to silence. She also happens to be a woman David stole from a friend thorough adultery (many believe rape) and state sanctioned murder.

Is David just being practical, reasonable, and protective of his son and God’s kingdom with which they are being entrusted? Perhaps. However, in his attempts to protect Solomon from Joab and other dangerous men, David gives Solomon a push towards turning into Joab. Joab understood that being practical, reasonable, and protective, usually meant killing others before they killed you.

Peter striking and taking off the ear of Malchus was protective.
The disciples’ concern about not having bread in the boat was reasonable.
The marketplace set up in the Temple was practical.
These kinds of things often earn a rebuke from Christ.

The grace of king David died with him.
The grace of Christ lives on with him and within us.
May we learn to extend Christ’s undying grace past the limits of our own.

Divine Hours Prayer: The Greeting
Not to us, O Lord, not to us, but to your name give glory because of your faithfulness. — Psalm 115.1

Read more about Grace Displaces Retribution
The kind of humility and gracious forgiveness often shown by David is as greatly out of place today as it was in his own time.

Read more about Dealing with Joab
Joab’s kind of loyalty is a twisted form of “honor” that cripples accountability, truth, and justice.