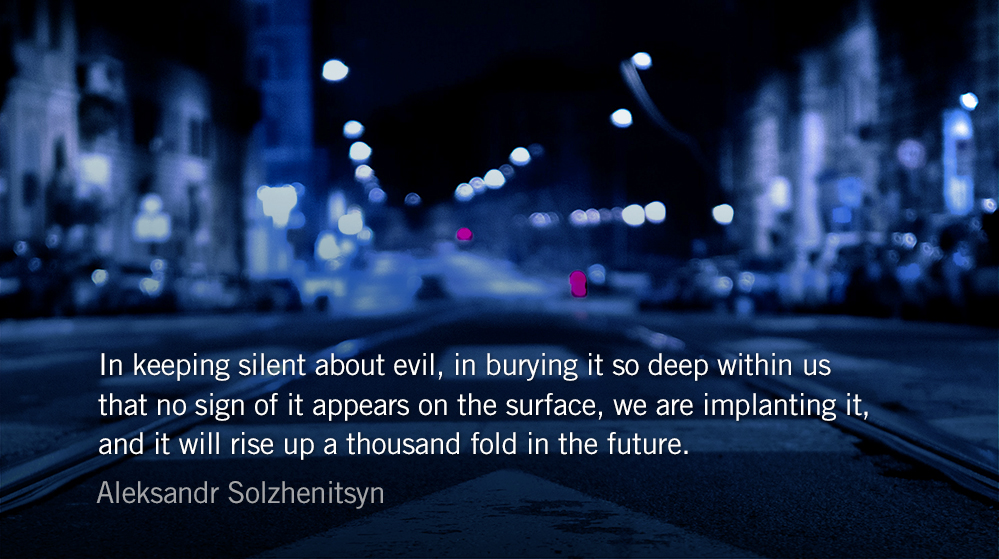 If you want to change the world, who do you begin with, yourself or others? I believe if we begin with ourselves and do the things that we need to do and become the best person we can be, we have a much better chance of changing the world for the better.

Rescue me, O my God, from the hand of the wicked, from the grasp of the unjust and cruel man.

“Gradually it was disclosed to me,” Aleksandr Solzhenitsyn noted, reflecting on his time as a prisoner in The Gulag Archipelago “that the line separating good and evil passes not through states, nor between classes, nor between political parties either—but right through every human heart—and through all human hearts.”

It is not that Solzhenitsyn wanted to ignore injustice—nor did he extend some sort of blind forgiveness for the atrocities of the Bolsheviks. “It is unthinkable in the twentieth century to fail to distinguish between what constitutes an abominable atrocity that must be prosecuted and what constitutes that ‘past’ which ‘ought not to be stirred up.’”

Yet even if it were prosecuted, Solzhenitsyn knew, eliminating evil involved far more than tamping down its expression in the modern world:

If only it were all so simple! If only there were evil people somewhere insidiously committing evil deeds, and it were necessary only to separate them from the rest of us and destroy them. But the line dividing good and evil cuts through the heart of every human being. And who is willing to destroy a piece of his own heart?

How similar we find the voice of the Psalms—crying out for God’s justice, pleading for God’s mercy. In Scripture we not only hear the psalmists cry out for God’s vengeance, but we see God exact his anger toward evil.

And yet, in a stunning response to our cry for mercy, God directs his anger toward himself. The wine of justice is pressed from the fruit of mercy. Anything less might satisfy our desire for retribution, but leave us longing for the hope and grace we need for this day.

Solzhenitsyn, like the Scriptures, charges us to move forward—to speak up—and to cry out for the justice our world needs:

In keeping silent about evil, in burying it so deep within us that no sign of it appears on the surface, we are implanting it, and it will rise up a thousand fold in the future.

When we neither punish nor reproach evildoers, we are not simply protecting their trivial old age, we are thereby ripping the foundations of justice from beneath new generations.

Blessed are they who do hunger and thirst after righteousness: for they shall be filled.