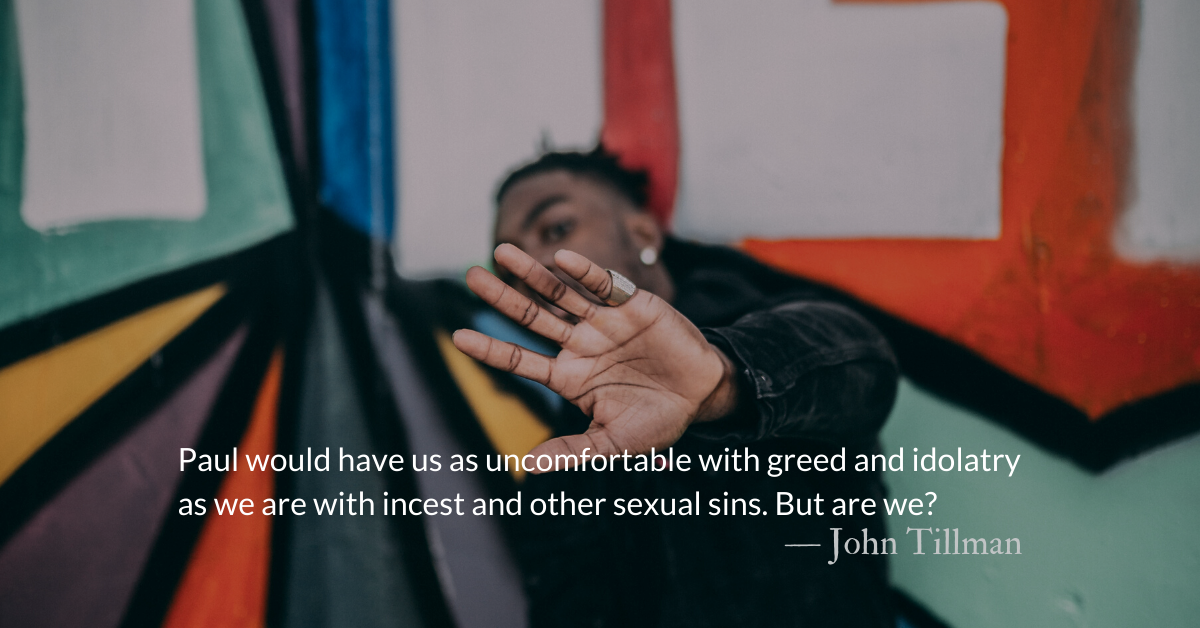 Scripture Focus: 1 Corinthians 5.9-10
I wrote to you in my letter not to associate with sexually immoral people—not at all meaning the people of this world who are immoral, or the greedy and swindlers, or idolaters. In that case you would have to leave this world.

Pause for a moment and summon up your feelings about the sexual sin of incest.

Think about how destructive it is, about how often it is rooted in or leads to abuse, and about how, even in our sexually freewheeling culture, it is considered repulsive….

In this letter to Corinth, sexual sins take the forefront because Paul is addressing a case of incest, a specific kind of sexual sin. But Paul hardly ever mentions sexual sins without also mentioning sins involving power, idolatry, and wealth. The most skipped-over words in the fifth chapter of 1 Corinthians may be “or the greedy and swindlers, or idolaters.” This shows that Paul, in comparison to incest, considers greed and idolatry to be equally repulsive, equally abusive, equally destructive, equally sinful, and therefore an equal reason to be subject to church discipline.

It’s uncomfortable to think about sins that we are prone to being the spiritual equivalent of incest. Although most Christians understand the belief that “sin is sin” and all sins are the same before God, in reality we all see the sins of others as having great and terrible import, while we minimize, excuse, and normalize our own sins.

Paul does not encourage boycotts or avoiding non-Christians who are active in sin. It is only believers who are continuing, unrepentantly in sin who are subject to this kind of treatment. Christians with a subculture mentality, who isolate themselves from interactions with non-believing “sinners,” are doing exactly what Paul says not to do.

We should also remember that Paul’s instructions about removing fellowship are intended to be an effort to warn and correct others so that they may be won back through repentance.

May we never expect non-Christians to live differently before we show them love.
May we be gracious to one another as we face the conviction of the Holy Spirit in areas of serious sins, such as sexual sin, greed, and idolatry.
May we stand for the Christian sexual ethic without abandoning other ethical stances that scripture holds as equally important.

Divine Hours Prayer: The Refrain for the Morning Lessons
I hate those who have a divided heart, but your law do I love. — Psalm 119.113

Read more about In Denial about Greed and Power
If there is anything that can still be shocking in today’s world, it is that we still don’t fully admit or understand the destructive nature of the sins of greed and power.

Read more about In Denial about Injustice
The sins that brought God’s judgment and caused the exile of Israel were multi-faceted. But there is a common thread—injustice.