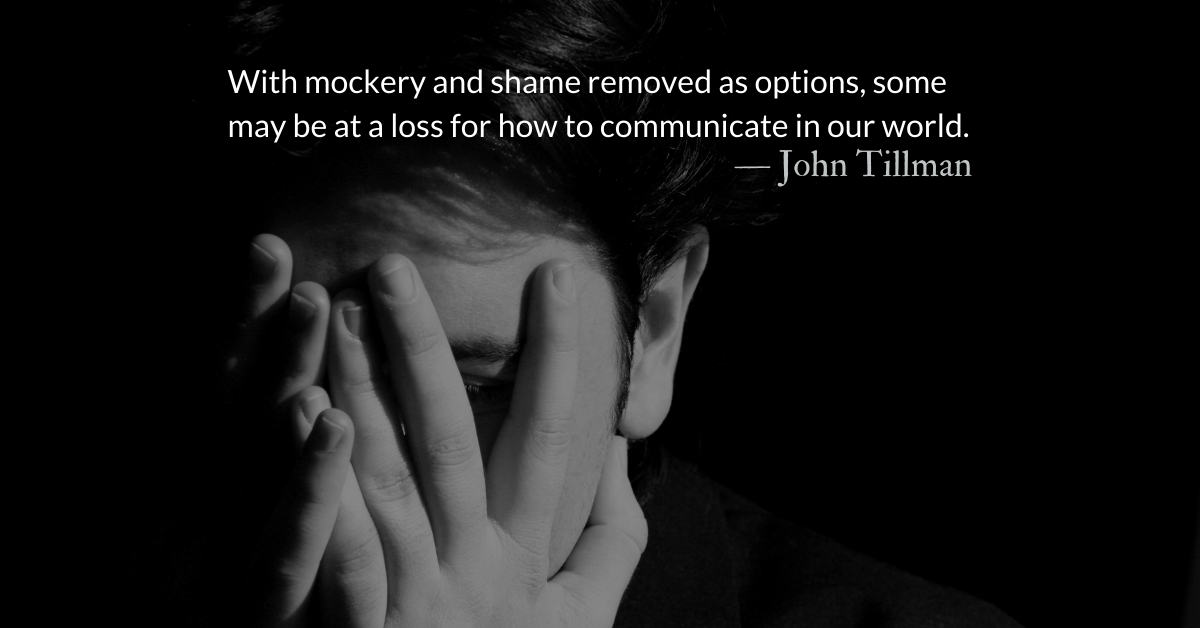 In the Face of Mockery and Shame

Scripture Focus: Mark 15.29-31
Those who passed by hurled insults at him, shaking their heads and saying, “So! You who are going to destroy the temple and build it in three days, come down from the cross and save yourself!” In the same way, the chief priests and the teachers of the law mocked him among themselves. “He saved others,” they said, “but he can’t save himself!

From John: Coming up this month is a strange anniversary in popular culture. The anniversary of Britney Spears’ public breakdown was the dominant story and source of humor for both “news” and late-night comedians in February 2007. I was reminded this week that Craig Ferguson was a significant exception to that rule. When he showed up to work that evening, he threw out the raft of Britney jokes written by his staff and instead did a truthful monologue discussing his misgivings about how his industry mocks vulnerable people and his own struggles with addiction in the past.

If an agnostic comedian can see the dangers of weaponizing and monetizing shame and mockery, certainly those who follow Christ can as well. This post from 2019 helps us see how Christ dealt with shame and mockery.

Reflection: In the Face of Mockery and Shame
By John Tillman

Most dictionaries define crucifixion with a mention of Jesus. But to some crucifixion is simply extreme punishment and to some, it is specifically tied to undeserved or unjust punishment. But crucifixion carries another, important implication—shame.

The mockery of the passing crowds was not by accident, but part of the punishment’s design. Despite the many artistic depictions of loincloths, victims were hung naked in a public place specifically for the purpose of shaming them.

Crucifixion was common and so was public shaming of the crucified. It would be an unusual day in Jerusalem if there was no one for the crowds around Golgotha to mock.

The same is true today. It is an unusual day when social media does not hoist on a hashtag a victim for our mockery and derision.

Mockery and shame is an industry, and like any industry on the rise, growth is based on demand. The industry of shame might not have replaced the industry of journalism yet, but it has disrupted the market. Journalism, staring down the rise of shame-based tabloids, has blinked, and adjusted its business model.

We, as a culture, demand to shame others. We seem to think it is our right. The mob justice of destruction and vengeance through shame is the only system of justice our culture trusts.

When preachers (or devotional writers) talk about sin and culture it is natural for Christians to first think of the sins of others. Take captive those thoughts now. Don’t allow yourself to engage in spiritual “whataboutism.” Brush aside thoughts of others’ wrongs. The Holy Spirit comes to help us see our own sins. If you are reminded of others’ sins, you aren’t listening to the right spirit.

Focus on how Jesus responded to shaming and mockery.

Hebrews says that Christ “scorned the shame” of the cross. This is not a reference to “clapping back” at accusers. Christ did not scorn the shamers.

In the face of all the mockery and pain, Jesus said, “Father forgive them for they do not know what they are doing.”

With mockery and shame removed as options, some may be at a loss for how to communicate in our world. This is why we must ask the Holy Spirit to convict us and respond on our behalf, making us salt and light with words of truth and love.

Divine Hours Prayer: The Request for Presence
Be pleased, O Lord, to deliver me; O Lord, make haste to help me. — Psalm 40.1-4

Read more about He Rejoices Over Us
Savior! Sanctifier of our Souls…remove our guilt, our shame, and our injuries to ourselves and others…

Read more about Repurposed Weapons
May we no longer be swords and shields but basins and towels.
No longer aggressors but comforters.