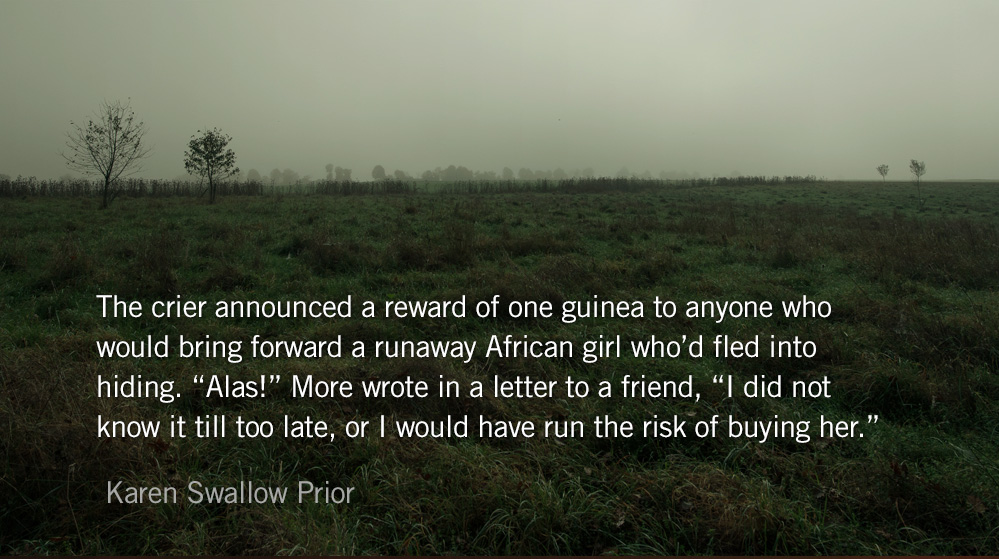 By Karen Swallow Prior

“Come! Let us ride to London to see bishops and booksellers!” The invitation comes from a small girl standing atop a wooden chair. Her bright eyes sparkle. The chairs have become a carriage, and the girl, Hannah More, is about to embark on an imaginary ride from this little village all the way to the bustling metropolis of London to see the men whose words she knows, even at this young age, have the power to shape the world: the bishops and the booksellers.

[Years later,] Buoyed by empty streets, the shouts of Bristol’s town crier echoed into the city churches and down the aisles, startling the worshippers assembled as usual one midsummer Sunday morning. The crier announced a reward of one guinea to anyone who would bring forward a runaway African girl who’d fled into hiding.

The girl’s master had threatened, for some unknown reason, to ship her to a slave-trading island to be sold, and she’d disappeared. Although slavery had been illegal within the borders of England and Wales since 1772, a “domestic servant” from Africa, such as this girl, was common.

The reward offered for the girl’s return, one guinea, was the British coin minted by Bristol’s Royal African Company as currency for trade in western Africa. In its original language, guinea meant “black person.” The morning’s worship was being interrupted by the offer of a guinea for a Guinea. Twenty shillings for a few stone of flesh.

Sometime after the solemnity of the city’s worship had been broken by the town crier, the girl was found, and the “trembling wretch was dragged out from a hole in the top of a house, where she had hid herself, and forced on board ship.”

The account is recorded by More, who was living in the countryside outside Bristol at the time. “Alas!” More wrote in a letter to a friend, “I did not know it till too late, or I would have run the risk of buying her.”

When she wrote this letter in 1790, More had been actively immersed in the fight against the slave trade for a long time. By the power of her pen, she would journey to London for real—not only in her childhood imagination—where she would see bishops and booksellers, and more, much, much more.