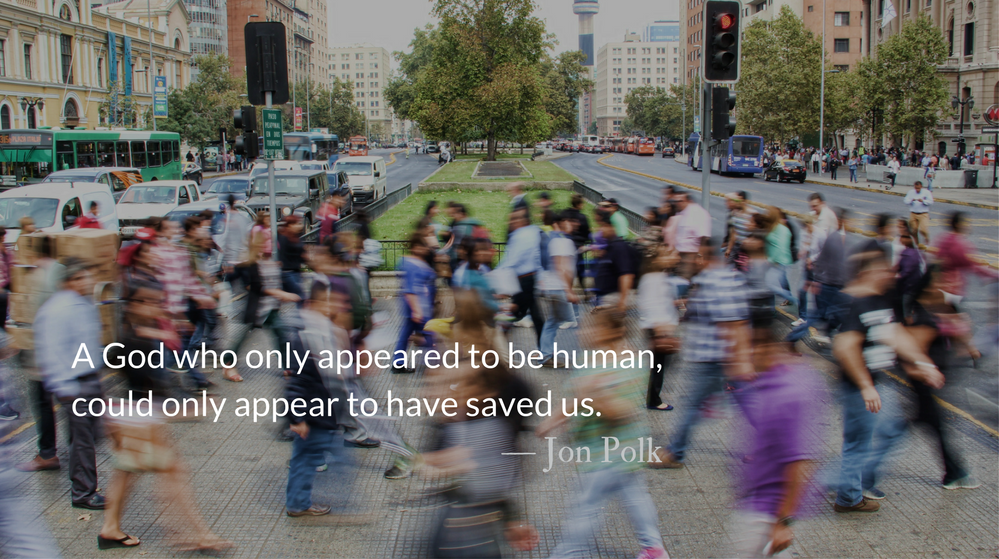 Scripture: Hebrews 2.14-15
Since the children have flesh and blood, he too shared in their humanity so that by his death he might break the power of him who holds the power of death—that is, the devil— and free those who all their lives were held in slavery by their fear of death.

This week and next, Jon Polk is taking us on a deep dive through the book of Hebrews. Check out the first one if you missed it. I’m looking forward to this journey. — John

For most believers of the Christian faith, accepting the divinity of Jesus is a given. This one who is called the Christ, the Son of God, is the fullest representation of the character and being of God. Jesus is fully divine.

But what are we to make of Jesus’ humanity? This is often where we struggle. How can Jesus be both fully divine and fully human?

When we read the gospels, we find that at times…

The scriptures tell us that Jesus was born, he grew physically, he died, and he had a human body after the resurrection.

Was this all absolutely necessary?

Given the number of eye-witnesses to Jesus’ earthly life, it may seem odd that one of the earliest heresies to plague the early Christian church was Docetism, the belief that Jesus’ physical body was merely an illusion, that he was actually pure spirit and only appeared to have a human body. John addresses this issue in his letters, stating first that “those who acknowledge that Jesus Christ has come in the flesh” are from God and second, that “those who do not acknowledge Jesus Christ as coming in the flesh are deceivers.”

In the case of Jesus, neither fully divine nor fully human was sufficient on its own. This is one of the great mysteries of the incarnation. Why did God, through his Son, come to earth in human flesh?

He did so for our very salvation.

It was not the angels in the heavenly realms that Jesus set out to rescue, but flesh and blood human beings who were held in slavery by the great deceiver. Jesus became fully human so that he could serve as our high priest to not only administer the atoning sacrifice for our sins, but also to become that sacrifice himself.

For a God who only appeared to be human, could only appear to have saved us. But our God, who became fully human, did so in order that he might fully save us. And therefore, we should not ignore so great a salvation, because we recognize that we are fully indebted to him.

The Request for Presence
Be glad, you righteous, and rejoice in the Lord; shout for joy, all who are true of heart. — Psalm 32.12