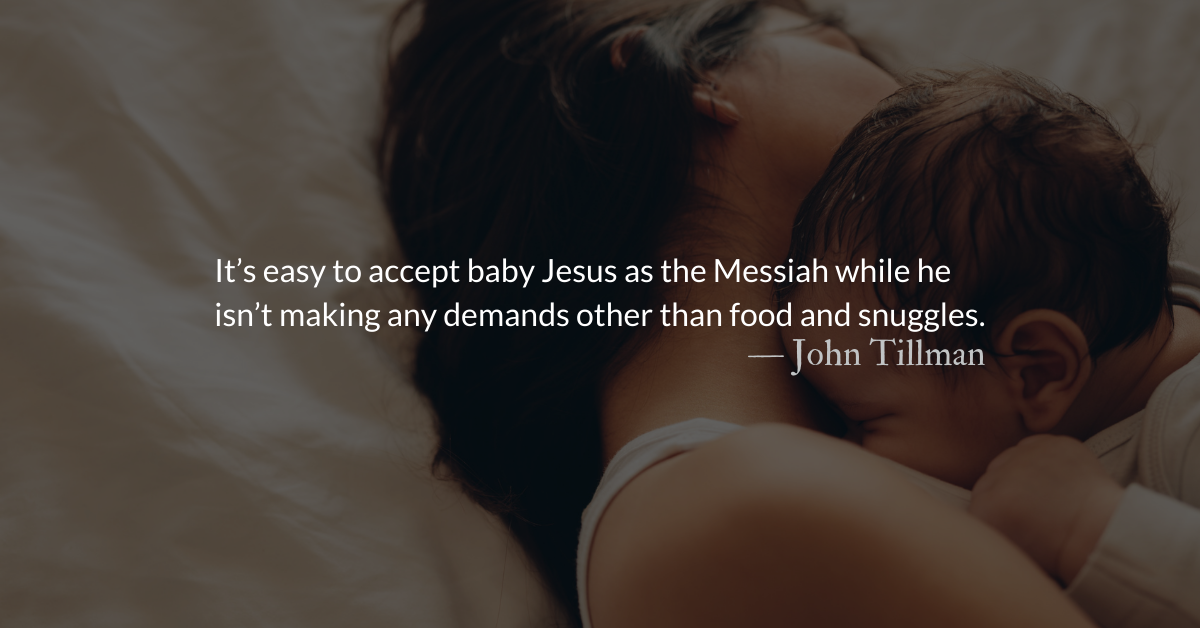 Scripture Focus: Luke 4.41
Moreover, demons came out of many people, shouting, “You are the Son of God!” But he rebuked them and would not allow them to speak, because they knew he was the Messiah.

From John: As we move closer to the Christmas season, it is helpful to take a look back at this post from 2018. Baby Jesus is culturally acceptable. The full-grown Jesus is considerably more demanding and controversial.

Very few individuals, before the resurrection, stated out loud their belief in who Jesus truly was. Most who did, were women.

Simeon, and Anna are the first but they have it easier than some. It’s easy to accept baby Jesus as the Messiah while he isn’t making any demands other than food and snuggles. This is why Baby Jesus is widely culturally acceptable. It is only once Jesus opens his mouth to speak that people reject him.

Like Peter, we have a tendency to want to tell Jesus what to do instead of doing what he tells us. Jesus corrected Peter for being concerned about the wrong things, and he might say the same to us today.

Peter, and the rest of the disciples, despite being exposed to so much otherworldly power, still thought in terms of earthly kingdoms and power. Even after the resurrection, moments before his ascension, they asked Jesus, “Lord, are you at this time going to restore the kingdom to Israel?”

We must stand and confess, not just the Christ Child and the childish, temporal hopes we may have for this world, but confess Christ the Crucified King.

We must stand before the man who says, “In this world you will have trouble,” and accept it as he did, “for the joy set before him.”

We must stand before the man who said, “take up your cross,” and, like him, set our face “like a flint” toward our sacrifice.

When we pray “your kingdom come”, the kingdom must come in our hearts before it can be realized into the world.

Divine Hours Prayer: A Reading
Jesus said: “Everything has been entrusted to me by my Father; and no one knows who the Son is except the Father, and who the Father is except the Son and those to whom the Son chooses to reveal him. “ — Luke 10.22

Read More about Beyond Admiration
The difference between an admirer and a follower still remains. The admirer never makes any true sacrifices. He always plays it safe…he renounces nothing, gives up nothing, will not reconstruct his life, will not be what he admires, and will not let his life express what it is he supposedly admires.