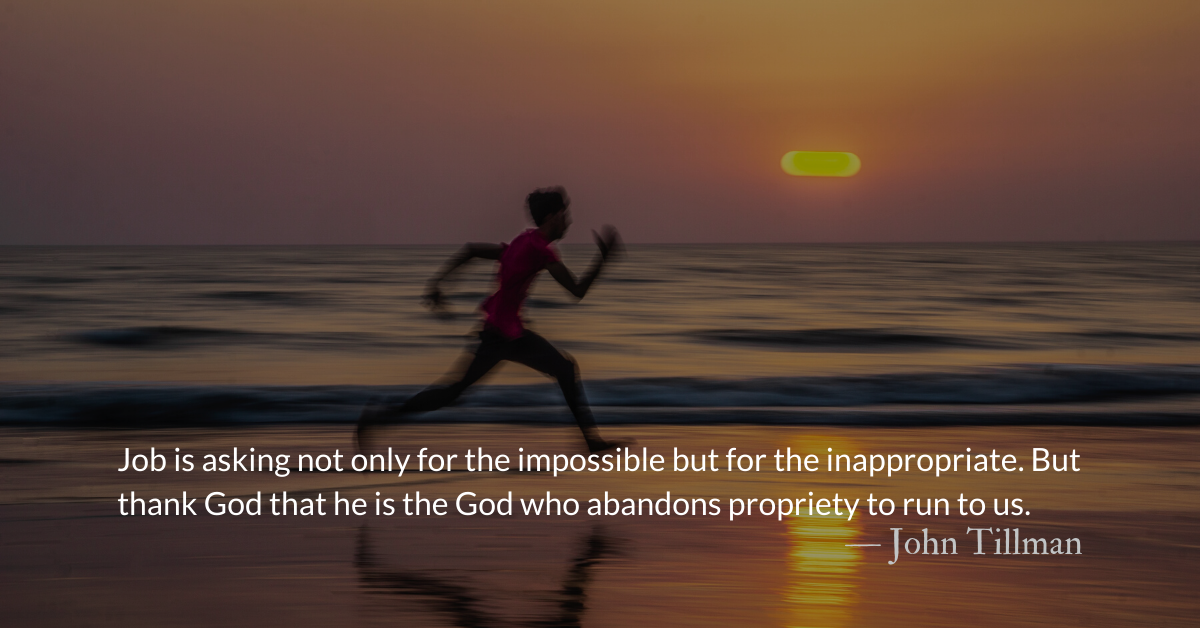 Scripture Focus: Job 9.33-35
If only there were someone to mediate between us,
someone to bring us together,
someone to remove God’s rod from me,
so that his terror would frighten me no more.
Then I would speak up without fear of him,
but as it now stands with me, I cannot.

Reflection: Christ, Our “If Only…”
By John Tillman

Job cries out over the course of his many speeches for mediation.

Job’s speeches flow with expansive, idiomatic imagery that recognizes an uncrossable gap between Job and his creator. God could no more come down than we could go up, and if God did step down…mountains would melt seas would flee…making Job’s problems inconsequential.

In the context of the beliefs of his age, Job’s request was foolish, impossible, and inappropriate. To propose God lower himself to address Job was unthinkable. Even as great a man as Job was reported to be, this was considered to be a prideful and sinful desire. Even Job’s friends, who, out of love, sat in the dust with him for days without speaking, considered this a scandalous bit of madness. This is why Job’s friends seem so harsh to us, so callous. Job is asking not only for the impossible but for the inappropriate.

But thank God that he is the God who abandons propriety to run to us. God’s love for us is foolishly, scandalously undeserved. He is the God who does the unthinkable on behalf of the unworthy.
God does not step foot on Earth to melt mountains but to melt hardened hearts, turning them back to God.
God does not wade into humanity, timidly cringing at the grossness of flesh, but rejoicing in living among us. He joyfully eats our fish, pays our taxes, touches the diseased, speaks to (and raises) the dead.

God is a God for whom there is no uncrossable gap. He crosses the distance to us.
Christ comes, applying for Job’s job posting. He would be our mediator if we let him. He stood between us and God. He removed God’s rod from us and placed it on his own back. He will remove our terror of God and allow us to see perfectly God’s tender mercies to us.

God told Moses he was the Israelites’ “I am.” Christ holds out his hands to Jerusalem, to Job, to us, and to all mankind, longing to be our “If only…”

Divine Hours Prayer: The Greeting
The Lord Lives! Blessed is my Rock! Exalted is the God of my salvation!
Therefore will I extol you among the nations, O Lord, and sing praises to your Name. — Psalm 18.46

Read more about Greater Footstool, Greater God, Greater Redeemer
As Job begins, Satan walks the Earth and has power over it. Before Job ends, he declares the promise that the Redeemer will stand upon the Earth to reclaim it.

Read more about Taking Sin Seriously
Jesus doesn’t “let the woman go.” He sends her out. Jesus, instead of taking the woman’s life, redeems it. He buys it for his own.