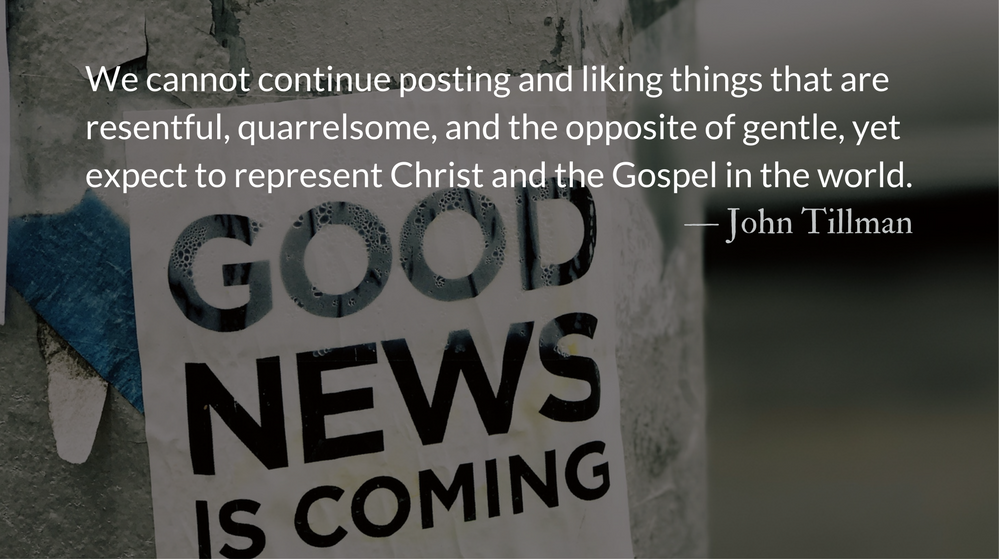 Scripture: 2 Timothy 2.24-25
The Lord’s servant must not be quarrelsome but must be kind to everyone, able to teach, not resentful. Opponents must be gently instructed, in the hope that God will grant them repentance leading them to a knowledge of the truth.

When we discuss differences online, the overheated rhetoric of partisan headlines becomes a part of our own speech. We share articles or videos that describe our opponents—not their arguments or political positions—as being destroyed, ripped, blasted, shredded. The more violent and dehumanizing the verb, the better.

This isn’t just verbal hyperbole. It is being borne out in actions as more and more people are physically assaulted following online opinion, that leads to opposition, that leads to violence or threats of violence. These types of actions can be extreme and political, such as the attempted assassinations of Representative Gabrielle Giffords in 2011 or of Republican Congressional members in 2017. They can also be smaller in spectacle, and fly below the news radar.

We should resist the urge to shrug off these events with denial. Christians believe that God’s Word became flesh, yet somehow we are reluctant to admit the power of our own words to become physicalized into actions. What we say and how we say it matters because, as Jesus taught, the words of our mouths come from our hearts and reveal our inward sinfulness. Sticks and stones start as words and words start in our sinful hearts. This is true not only of the words we speak or type ourselves, but the words we lend our digital voices to. By posting, liking, and retweeting articles about our ideological rivals being “destroyed” we are revealing not our ideological righteousness, but our theological sinfulness.

In Paul’s exhortation to Timothy he encourages faithfulness to the Gospel, and fidelity to right teaching, but Paul specifically instructs Timothy not to be resentful or quarrelsome and to instruct opponents with gentleness. This was no low-stakes conflict that Paul was advising Timothy in. The very heart of what it meant to be a Christian and the definition of salvation through Christ was at stake. It was much, much more important than who misinterpreted whose tweet this week. Yet, still Paul’s charge was to teach gently.

The Request for Presence
O Lord, watch over us and save us from this generation for ever. — Psalm 12.7