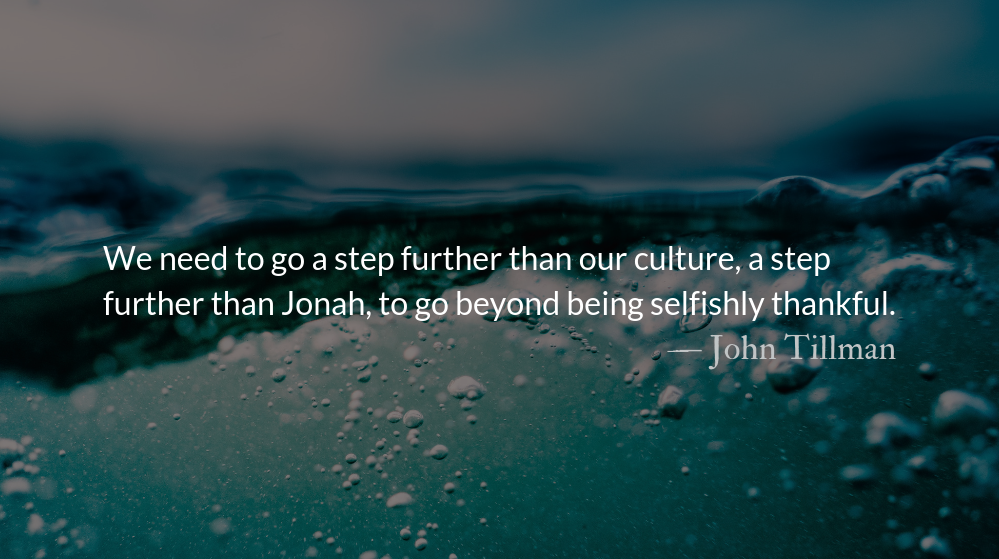 Jonah 1.1-3
The word of the Lord came to Jonah son of Amittai: “Go to the great city of Nineveh and preach against it, because its wickedness has come up before me.”

On a day of Thanksgiving we take a brief look at a selfish prophet—Jonah.

Jonah was a prophet of national status. Second Kings tells us that Jonah prophesied that God would restore Israel’s borders through Jeroboam II, Israel’s longest reigning and most outwardly successful king. However, Jeroboam II was an evil king who maintained the evil practices of the kings before him, and the Bible is clear that God saved Israel at this time for the sake of his name and because of the suffering of the people, and not due to Jeroboam’s repentance, leadership, or greatness.

Jonah was likely thankful for God’s mercy on his own country and people, despite their evil leadership. But then, Jonah is called to prophesy to another evil nation. Nineveh was the capital of the Assyrian empire that had been threatening and oppressing the northern kingdom of Israel for years.

And Jonah ran. He ran not to avoid God’s punishment for his sins, but to avoid being the instrument of God’s mercy for others’ sins. Jonah thought he could selfishly carry God’s mercy away.

A God who does not treat us as we deserve is also a God who often does not treat our enemies as we might feel they deserve. It is hard to be thankful for God’s mercy to others. We’d more often, like Jonah, set up a watch party to view their destruction.

Jonah’s only moment of thankfulness is one of selfishness. He is thankful for the plant that shades him from the burning sun. But he is scornful of God’s mercy that shaded Nineveh from God’s burning anger.

We too often, like Jonah, feel responsible that those who have wronged us should not “get away with it.” But in God’s timing, nothing goes unpunished. Assyria eventually suffered all the destruction and punishment their evil practices deserved. But in this moment, mercy was offered, and mercy was accepted. And Jonah had to learn to be thankful for it.

May we be selflessly thankful for the mercy that God may choose to display even to those who we deem unworthy.
May we be thankful to be agents of forgiveness to those who do not know their right hand from their left.

Prayer: The Call to Prayer
Come, let us bow down, and bend the knee, and kneel before the Lord our Maker. For he is our God, and we are the people of his pasture and the sheep of his hand.  — Psalm 95:6-7

Additional Reading
Read More about Resisting in Faith
Daniel embraces civility and service to his enemies. Daniel embraced civility even when he was under the direct threat of death.

Read More about Face Like Flint :: A Guided Prayer
In what ways are we willing to accept victory with Christ but not suffering? Where do we reach for our swords, when Christ calls out, “No more of this!”…and heals the one we would attack? Are we willing to heal our enemies?