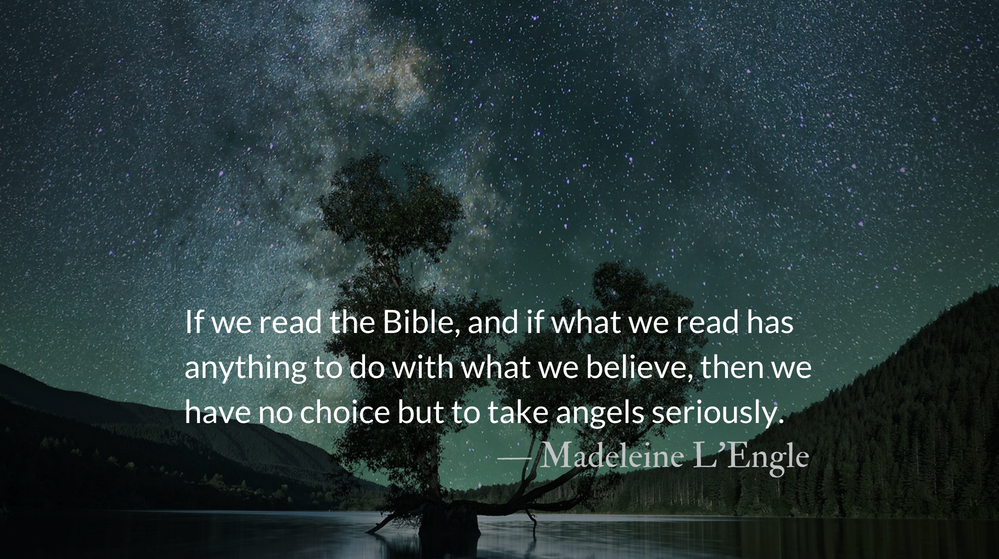 Scripture: Revelation 1.1-2
The revelation from Jesus Christ, which God gave him to show his servants what must soon take place. He made it known by sending his angel to his servant John, who testifies to everything he saw—that is, the word of God and the testimony of Jesus Christ.

As a writer of what today might be called “Fantasy Sci/Fi” novels, Madeleine L’Engle was often perplexed at the tendency of scholarly Christians to hold at arm’s length the angels and miracles of the Bible.

Cherubim, seraphim, all the angelic host as they are described in scripture, have a wild and radiant power that often takes us by surprise. They are not always gentle. They bar the entrance to Eden, so that we may never return home. They send plagues upon the Egyptians. They are messengers of God. They are winds. They are flames of fire. They are young men dressed in white.

Encounters with angels in the Bible are always moments of great importance and have always attracted a great deal of scholarly attention.

The faith of intellectualism is interested in explaining away the angel. Intellectual assent wants to dissect the angels’ particulars and clarify their place in the great chain of being.

This can become analogous to pondering whether the composition of a stop sign is steel, fiberglass, or aluminium, as you roll past it into the intersection.

To take angels seriously, L’Engle insists that we must have a bit more childlike faith.

Three of them come to Abraham to be his guests. One wrestles all night long with Jacob. They minister to Jesus after the temptations in the wilderness. They are God come to tell us something, and in the Old Testament it is obvious that God’s people understand that angels are voices and appearances of the Master of the Universe himself.

To be visited by an angel is to be visited by God. To be touched by an angel is to be touched by God, and it is a terrifying experience. When the angel smote him on the thigh, Jacob limped forever after. Daniel, who had braved lions, trembled and fainted at the appearance of the Lord’s angel. And John, on the Isle of Patmos, fell down as though dead.

If we read the Bible, and if what we read has anything to do with what we believe, then we have no choice but to take angels seriously; and most artists do, from Milton to Doré to Shakespeare…

The artist, if he is not to forget how to listen, must retain the vision which includes angels and dragons and unicorns, and all the lovely creatures which our world would put in a box marked Children Only.

May we read the Bible (especially the upcoming chapters of Revelation) with a child’s faith and a child’s imagination, guided and spurred by the Holy Spirit.

*Quotations from Walking on Water, by Madeleine L’Engle

Prayer: The Request for Presence
Show us the light of your countenance, O God, and come to us. — Psalm 67.1