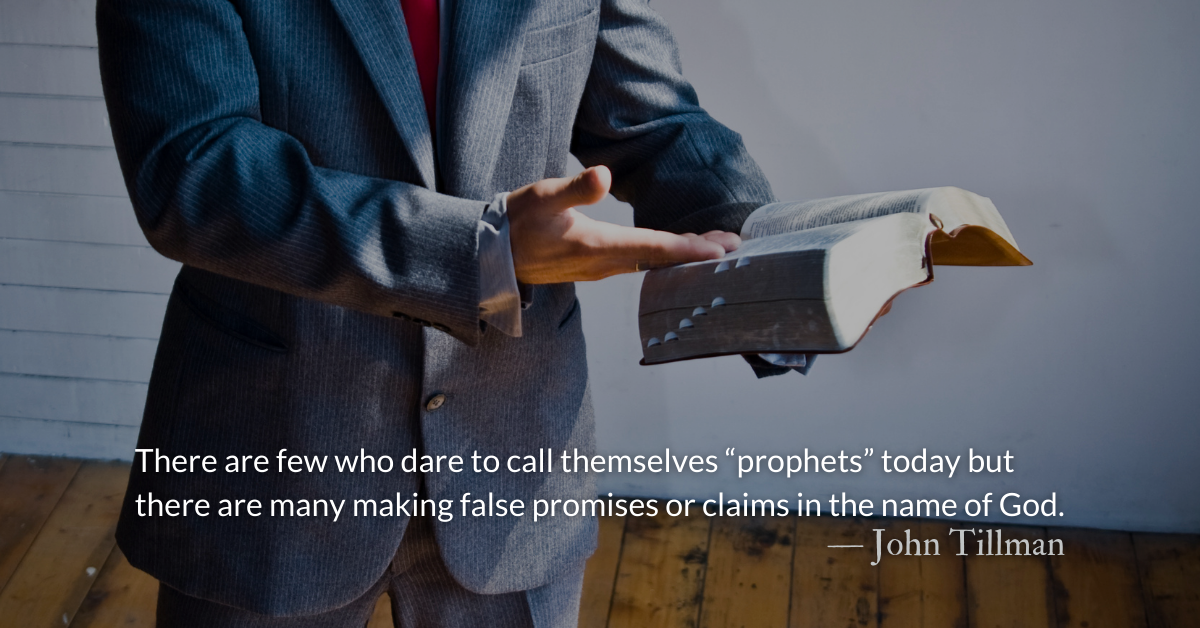 Cut and Run from False Prophets

Scripture Focus: Zechariah 13.3
3 And if anyone still prophesies, their father and mother, to whom they were born, will say to them, “You must die, because you have told lies in the Lord’s name…”

Jeremiah 6.13-14
13 “From the least to the greatest,
all are greedy for gain;
prophets and priests alike,
all practice deceit.
14 They dress the wound of my people
as though it were not serious.
‘Peace, peace,’ they say,
when there is no peace.

Reflection: Cut and Run from False Prophets
By John Tillman

This tiny chapter of Zechariah contains a difficult to read, strange vision of the death of “prophets” who tell lies in the name of the Lord.

Stabbing false prophets to death is out of the question today. Even in Zechariah’s day this was a vision and probably not intended for literal interpretation. However, Zechariah’s audience knew that lying prophets were deadly. Their lies killed.

The previous generation of prophets enriched themselves through politically popular messages. Jeremiah called them “greedy for gain” and repeated this description of them twice:  “They say, ‘Peace, peace” when there is no peace.” (Jeremiah 6.13-14; 8.11) These prophets had the ears of the kings and most of the people. “We are God’s special nation,” they said. “God loves us too much to allow us to suffer,” they said. These lies led people to their deaths.

It may be hard for us to understand how prevalent these false prophets were because the Bible contains the writings of the good prophets. However, we need to remember that the voices we hear from scripture are the voices of the remnant—the faithful minority. The voices of the majority looked at sin and corruption in Judah or Israel and said, “Nothing to see here. Cost of doing business.”

The exile and suffering Israel and Judah endured is due to their choice to believe and trust in false prophets. The faithful suffered along with the guilty, however, God used this suffering to refine his faithful ones. Zechariah speaks of the remnant as being purified like fine metals.

There are few who dare to call themselves “prophets” today but there are many making false promises or claims in the name of God. Part of the crisis of abuse within the church is that powerful leaders, in God’s name, shamed their victims into silence. Part of the idolization of politics in the church involves leaders, in God’s name, demanding followers vote for a particular party or person. By this, they make God a liar.

Rather than stabbing false prophets (which is out of the question and antithetical to everything Jesus taught), it would be wise for us to cut their influence out of our lives.

Listen carefully to “prophets” in your life. When leaders say something that makes God a liar, it is a red flag. When they consistently do so, cut and run. Shake the dust from your feet and leave them to God’s wrath.

Read more about The Losers Who Write History
Not one of those glowingly positive, king-praising prophets’ writings are in our Bible. Instead we have the writings of the losers. The cries of the oppressed.

Read more about Balaams and Balaks
These modern Balaams do their best to put words in God’s mouth that are pleasing to the powerful.