Scripture Focus: Daniel 6.10-11
10 Now when Daniel learned that the decree had been published, he went home to his upstairs room where the windows opened toward Jerusalem. Three times a day he got down on his knees and prayed, giving thanks to his God, just as he had done before. 11 Then these men went as a group and found Daniel praying and asking God for help.

Daniel’s daily prayer probably concerned his reading of Jeremiah’s prophecies about the return from exile. (Daniel 9.1-3)

Daniel’s prayer was not just any kind of prayer. Daniel prayed for God to forgive the sin of the people and return them to their homeland. This was a subversive prayer for the oppressed to be freed by the government Daniel served.

Regardless of the topic of Daniel’s prayer, when a law was passed forbidding it, Daniel’s public prayer became a protest against injustice.

Daniel prayed in defiance of an unjust law. He was guilty before the law of the land, but blameless before God. He also remained blameless and unassailable in the righteousness of all his other dealings. He broke no other law in the course of his protest.

Finally, Daniel faced the consequences of his protest without protest. He did not demand or expect to be spared. He trusted in God for justice, not in humans.

We too, are exiles living in an unjust world. The corrupt followers of the corrupt systems around us are prepared to penalize us for resisting. In a corrupt system, incorruptibility is a crime.

When we protest injustice, no matter what is, we can follow Daniel’s model of publicly, prayerfully, and persistently protesting unjust laws in a just and righteous way. Daniel’s protest softened the heart of a king and changed the leadership of an entire nation. What might ours change today?

Pray this prayer for those living in and protesting injustice in a corrupt world: (Based on Psalm 112 and the proclamation of Darius in Daniel 6.)

Oh, God whose kingdom will not be destroyed
Rescue and save!
As in heaven, work your will on the earth.
From ravenous lions, save us, your servants.

Make the darkness light for the upright,
The gracious, compassionate, and righteous
who conduct their affairs with justice.
May hearts be steadfast
May the wicked be vexed,
May justice longed for roll like rivers over them.

Divine Hours Prayer: The Morning Psalm
Your righteousness, O God, reaches to the heavens, you have done great things; who is like you, O God?
You have showed me great troubles and adversities, but you will restore my life and bring me up again from the deep places of the earth,
You strengthen me more and more; you enfold and comfort me.
Therefore I will praise you upon the lyre for your faithfulness, O my God; I will sing to you with the harp, O holy One of Israel.
My lips will sing with joy when I play to you, and so will my soul, which you have redeemed.
My tongue will proclaim your righteousness all day long,for they are ashamed and disgraced who sought to do me harm.  — Psalm 71.19-24

Read more about A Generational Lament
Prayers of lament and complaint are a healthy and fulfilling spiritual practice that can be entered into by individuals and communities.

Read more about Peter’s Unfinished Work
As evidenced by both the murder of George Floyd and some of the broken and tragic responses to it, the church has much work left to do. 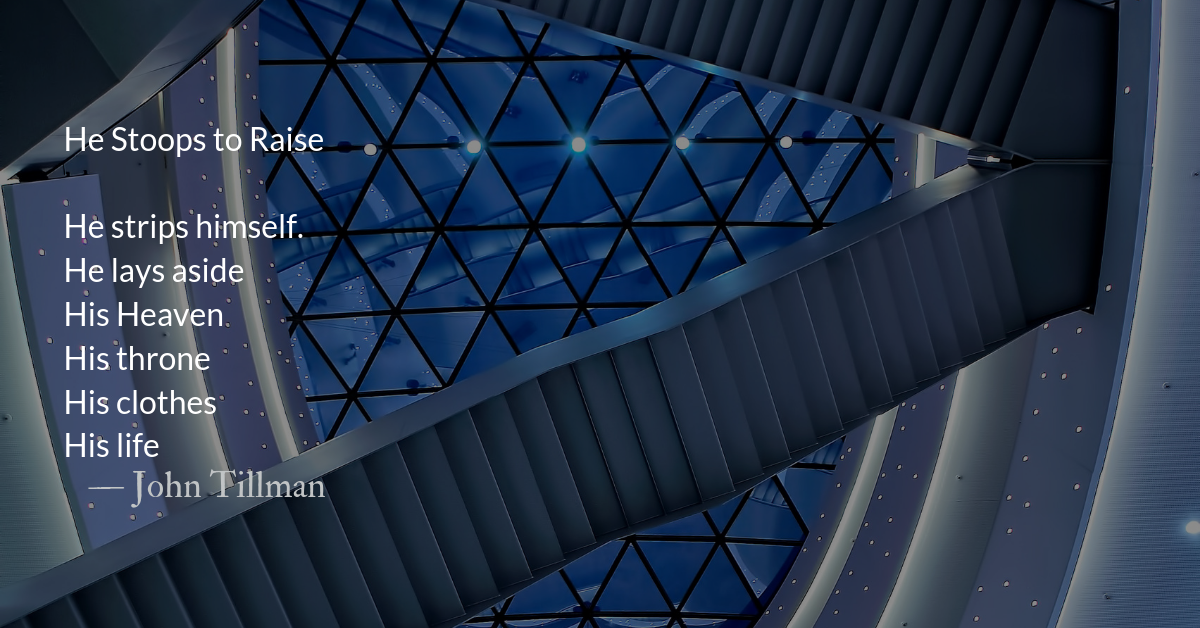 He Stoops to Raise

Psalm 113.5-8
Who is like the Lord our God,
the One who sits enthroned on high,
who stoops down to look
on the heavens and the earth?

He raises the poor from the dust
and lifts the needy from the ash heap;
he seats them with princes,
with the princes of his people.

Reflection: He Stoops to Raise
By John Tillman

Christ’s entire life could be understood as a process of descending and ascending. From highest Heaven, to a manger. From honored teacher, to lowly footwasher. From worshiped Messiah and king, to cursed and crucified Lamb of God. He goes from the highest place, to the lowest place. And then, he ascends.

He Stoops to Raise
He strips himself.
He lays aside
His Heaven
His throne
His clothes
His life

He lowers himself
Steps down, descends
He stoops
He kneels
Head bowed
He bends

He sinks, He digs
He slides, Prostrates
Below
Our sin
Below
Hell’s gates

And then he lifts
His eyes, His face
Begins
To rise
To claim
His place

Then he returns
All things in place
Restores
Rebuilds
Redeems
Remakes

Prayer: The Short Verse
“I am the Alpha and the Omega,” says the Lord God, who is, who was, and who is to come, the Almighty. — Revelation 1.8

Read more about The Gospel is an Uprising
The Anastasis can be understood as “already and not yet.” It is both completed in the past, coming in the future, and happening now, in our midst.

Read more about A Better Resurrection :: Throwback Thursday
My life is like a frozen thing,
No bud nor greenness can I see:
Yet rise it shall—the sap of spring;
O Jesus, rise in me.