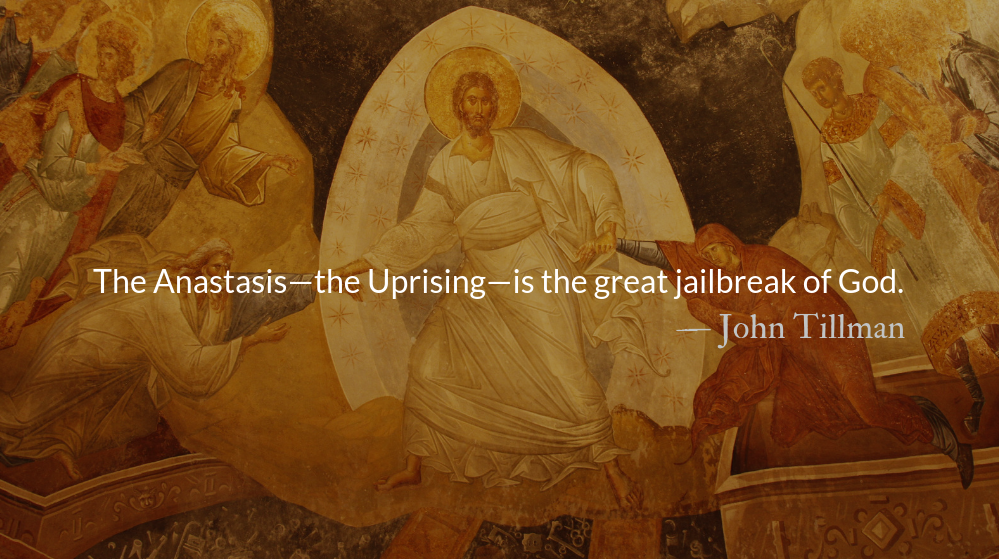 The Gospel is an Uprising

Micah 2.13
The One who breaks open the way will go up before them;
they will break through the gate and go out.
Their King will pass through before them,
the Lord at their head.”

Luke 11.20-22
But if I drive out demons by the finger of God, then the kingdom of God has come upon you. “When a strong man, fully armed, guards his own house, his possessions are safe. But when someone stronger attacks and overpowers him, he takes away the armor in which the man trusted and divides up his plunder.

Reflection: The Gospel is an Uprising
By John Tillman

The depictions of Christ in today’s readings relate strongly to a traditionally Eastern Christian visualization of this ultimate resurrection that translates anastasis more literally as “Uprising.”

These artworks depicting Christ’s resurrection step outside of time and geography to show Christ exiting the doors of Hell itself, literally breaking open the gates. He is often depicted stepping upon Death, as he leads by the hand Adam, Eve, and others of the faithful dead.

The Uprising is a visualization of Christ’s resurrection gleaned less from gospel accounts than from multiple sources throughout scripture, including our passage today in Micah, where Christ is “the One who breaks open the way,” gathering captives together and smashing through the gates holding them back, and our passage from Luke, where Christ portrays himself as a violent thief, breaking in to the house of the strong man, Satan, destroying his defenses, and plundering his possessions.

The Anastasis can be interpreted as an Eighth Day occurrence, an event occurring outside of time. But it can also be understood as “already and not yet.” It is both completed in the past, coming in the future, and happening now, in our midst.

Our ultimate freedom may be in the future, but Christ is still the strong man, standing ready to liberate us today as he did the many demoniacs in scripture. We may not suffer in the same way they did but aren’t we still impaired as many of them were?

What sins are you blind to? What cries for help are you deaf to? What injustice leaves you mute, unwilling to speak?

May Jesus, the strong man, the liberator, free us to see, to hear, and to speak.
May he kick open the gates of what paralyzes us and lead us out to do his work in the world.

May we join the Uprising.

Prayer: The Call to Prayer
God has gone up with a shout, the Lord with the sound of the ram’s horn.  — Psalm 47:5

Additional Reading
Read More about The Eighth Day
Peter encourages his readers about Christ’s second coming with thoughts that closely relate to the Jewish concept of the eighth day that was influential on early Christian belief and practice.

Read More about Freedom for Prisoners :: Epiphany
The Gospel is a jailbreak. Jesus is a thief in the night, robbing the possessions of the strong man, Satan—stealing away with captives who foolishly, yet willingly sold themselves to the debtor’s prison of sin.