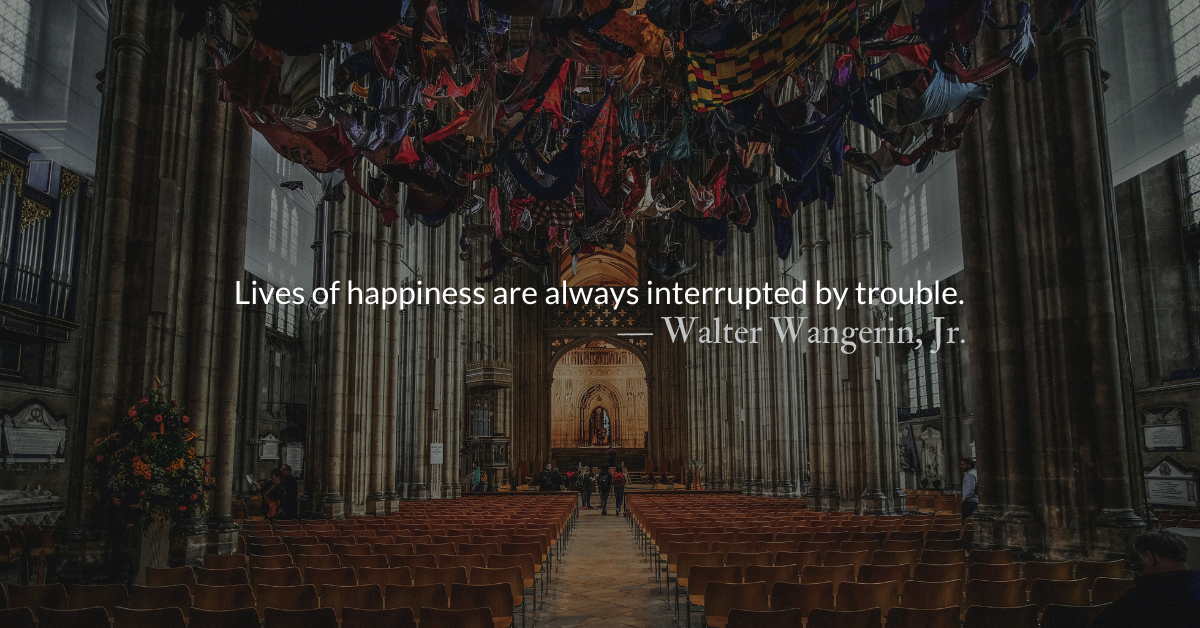 Scripture Focus: John 11.32-35
32 When Mary reached the place where Jesus was and saw him, she fell at his feet and said, “Lord, if you had been here, my brother would not have died.”
33 When Jesus saw her weeping, and the Jews who had come along with her also weeping, he was deeply moved in spirit and troubled. 34 “Where have you laid him?” he asked.
“Come and see, Lord,” they replied.
35 Jesus wept.

Matthew 2.16-18
16 When Herod realized that he had been outwitted by the Magi, he was furious, and he gave orders to kill all the boys in Bethlehem and its vicinity who were two years old and under, in accordance with the time he had learned from the Magi. 17 Then what was said through the prophet Jeremiah was fulfilled:

18 “A voice is heard in Ramah,
weeping and great mourning,
Rachel weeping for her children
and refusing to be comforted,
because they are no more.”

The peaceful sounding hymn, “The Coventry Carol,” with its calming chorus of “lully, lullay” (an onomatopoeia also found in the word lullaby), could be a perfect song for singing a sweet baby to sleep.

O sisters too, how may we do
For to preserve this day
This poor youngling for whom we sing,
“Bye bye, lully, lullay”?

The carol takes a decidedly dark turn in the second verse.

Herod the king, in his raging,
Charged he hath this day
His men of might in his own sight
All young children to slay.

Not what we might expect from a lullaby, these are the words of Bethlehem mothers grieving over their doomed sons. Yes, this carol depicts the often-overlooked postscript to the nativity story, the grim ‘Massacre of the Innocents.’

The mothers’ despair results from Herod’s order to kill all the male infants in Bethlehem under the age of two, his reaction to the inquiry of the Magi about the baby born to be king.

Certainly not a scene one typically finds in a modern Christmas pageant.

“The Coventry Carol” originates from 16th century Coventry, England, where it was performed, in fact, in a play called, The Pageant of the Shearmen and Tailors, a medieval performance depicting the complete nativity story from chapter two of Matthew, including the death of the young boys.

Of this horrific incident, Walter Wangerin writes, “It’s a hard thing to think about that event—especially now when it interrupts our Christmas joy. Yet it must be remembered, because lives of happiness are always interrupted by trouble.”

This haunting song reminds us that even the birth of our Savior is accompanied by grief and tragedy. For many, Christmas may not be ‘the most wonderful time of the year,’ but instead, a time when painful memories of missing loved ones or difficult days past overshadow our experience of the season.

Something lovely happens in the final verse, however.

That woe is me, poor child, for thee
And ever mourn and may
For thy parting neither say nor sing,
“Bye bye, lully, lullay.”

The lamenting mothers recognize “thy parting,” that Mary and Joseph are able to flee to Egypt with the baby. Solace can be taken in the knowledge that Jesus has escaped the wrath of Herod. Christ’s final ‘parting’ will come with his own brutal death, which will serve to bring ultimate peace to humanity.

If you are grieving over loss this Christmas time, know that is okay.

If you are lamenting the past this Christmas, know that is okay.

If you are struggling to feel “Christmas-y” this year, know that is okay.

Image Note: The picture used in our image is from an artistic display at the Canterbury Cathedral by the British artist Arabella Dorman. It is made up of hundreds of items of refugee clothing, found largely on the beaches of the Greek island of Lesbos. It is a reminder to us of the violence and darkness refugees flee from, as did the holy family, and the light of Christ that promises to overturn that darkness. The unedited image can be viewed here.

Read more about End of Year Giving and Supporting our work
If you have not donated this year (or ever), please prayerfully consider joining our donors, with either a one-time or monthly donation.

Read more about Joy Despite Everything :: Joy of Advent
Martha greets us at the darkest point of her life. When faith has failed. When her wick smolders. Martha shows us how to wait. 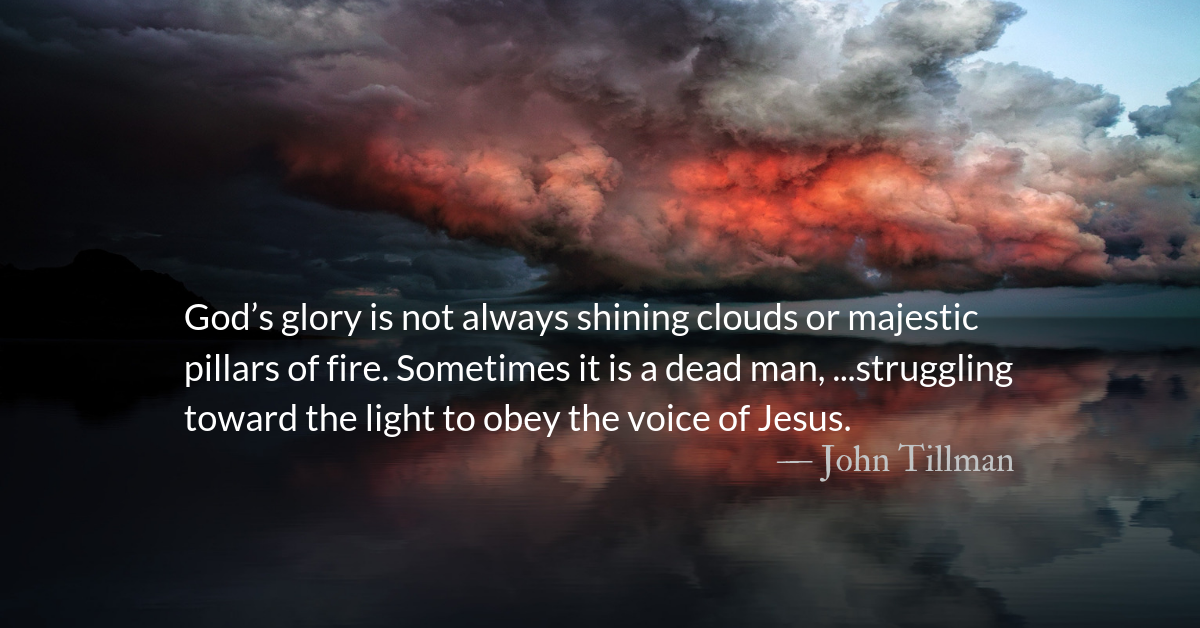 The Staggering Dead and the Glory of God

John 11.40
Then Jesus said, “Did I not tell you that if you believe, you will see the glory of God?”

Reflection: The Staggering Dead and the Glory of God
By John Tillman

We do not know when exactly Jesus told Martha that by believing, she would see the glory of God. Perhaps while waiting for Mary to join them. Perhaps during the walk to the tomb. Perhaps it was at an earlier visit. Whenever he told her this, it was a bold claim.

Glory was a general term for splendor and greatness. Jesus used this same word when comparing Solomon’s clothing to that of a flower of the field. But seeing God’s glory was not the same as seeing the glory of the flowers or the glory of an earthly king’s power and wealth.

It is in tomorrow’s reading from Exodus 33, that Moses asks to see God’s glory. His desire is only partially granted. Moses, the dedicated servant of God and archetypal messianic forerunner of Christ, is given only a glimpse of God’s glory passing by. Later on in Exodus, when God’s glory fills the Tabernacle, the priests had to stop working and leave the area. When seeing God’s glory, holy prophets of old hid their faces, fell to the ground, and confessed their sins. God’s glory is terrifying in its beauty. Mary and Martha see it not peeking from the cleft of a rock, but directly, and in a shocking manner.

The glory that Jesus sets out to show Martha and Mary is at first terrifying for the sisters. The gruesome realities of death are on Martha’s mind as she warns Jesus about the bad odor that will have developed over four days.

God’s glory is not always shining clouds or majestic pillars of fire. Sometimes it is a woman holding her nose against the smell of death, being surprised by the sounds of life. Sometimes God’s glory is a dead man, blindfolded and bound hand and foot, struggling toward the light to obey the voice of Jesus.

Just as John calls the blind man “the blind man” after his healing, he reports the “the dead man” came out of the grave. In this world, we may never completely escape the identity of what Christ saves us from. We are never not “sinners,” but we are to be ever staggering, struggling toward the light, toward Christ’s voice.

Prayer: The Request for Presence
Show us the light of your countenance, O God, and come to us. — Psalm 96.9

Read more about Setting Aside the Scriptures
The Greek word translated “set aside,” (lyō) carries an implication beyond not ignoring the parts of the Bible we don’t like. It refers to unbinding or untying things bound together for a purpose. This would include untying the thongs of sandals (as used by John the Baptist), loosening bandages (as used by Jesus regarding Lazarus) or even the bonds of marriage (as referenced by Paul).

Read more about The Gospel is an Uprising
May Jesus, the strong man, the liberator, free us to see, to hear, and to speak.
May he kick open the gates of what paralyzes us and lead us out to do his work in the world. May we join the Uprising. 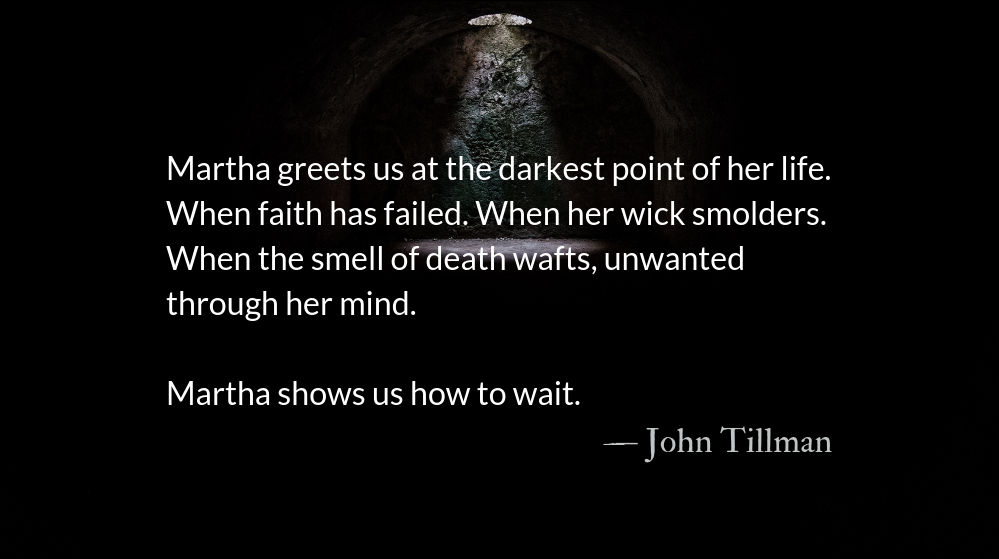 Joy Despite Everything :: Joy of Advent

John 11.27
I believe that you are the Messiah, the Son of God, who is to come into the world.

Reflection: Joy Despite Everything :: Joy of Advent
By John Tillman

When we wait in Advent we know the date on the calendar when Christmas comes. We know the day we will blow out the candles the final time. We know the number of shopping days left. We know how long until we will take the decorations down.

And many times we stand over a casket instead of sitting around a table. We make an unemployment claim instead of a promotion. We box up our things and move in with our parents when our miracle passes us by.

Advent grows darker as the year wanes. And Martha greets us at the darkest point of her life. When faith has failed. When her wick smolders. When the smell of death wafts, unwanted through her mind.

Martha, Martha.
She was concerned about many things.
But she came to be concerned only with one thing.

Martha who believed in faith that her brother would be healed.
Martha who sent word to Jesus.
Martha who received back the messenger and wondered why Jesus wasn’t with him.

From John:
This weekend, on Sunday, we light the last candle for Advent. Monday we have the pleasure of Jada Swanson writing our Christmas Eve post to close out our Advent series. It has been a great joy and challenge to write new Advent content this year. We have a lot to look forward to in the new year, and I hope your Advent has been restful, revelatory, and has awakened you to prepare for renewed connection with God in the New Year.

Prayer: Refrain for the Morning Lessons

Read More about Light and Dark and Joy :: Joy of Advent

Darkness is not dark to our God. That means that God is not blind to our sins, but it also means that we do not walk in darkness alone. We walk with the God who knows the darkness as well as he knows the light.

Read More about The Fragrance of Faith :: Readers’ Choice

May we make extravagant, prophetic, and lasting gifts to Christ and to the spreading of this gospel, like a fragrance, throughout the world.

At The Park Forum, we produce over 100,000 words of free devotional content every year.
Thank you for reading and a huge thank you to those who fund our ministry.
End of Year giving and monthly giving each play a large part in keeping The Park Forum ad-free and helping us to be able to continue producing fresh content.
Support the spiritual development of thousands of readers by making a donation today or joining our monthly donors.