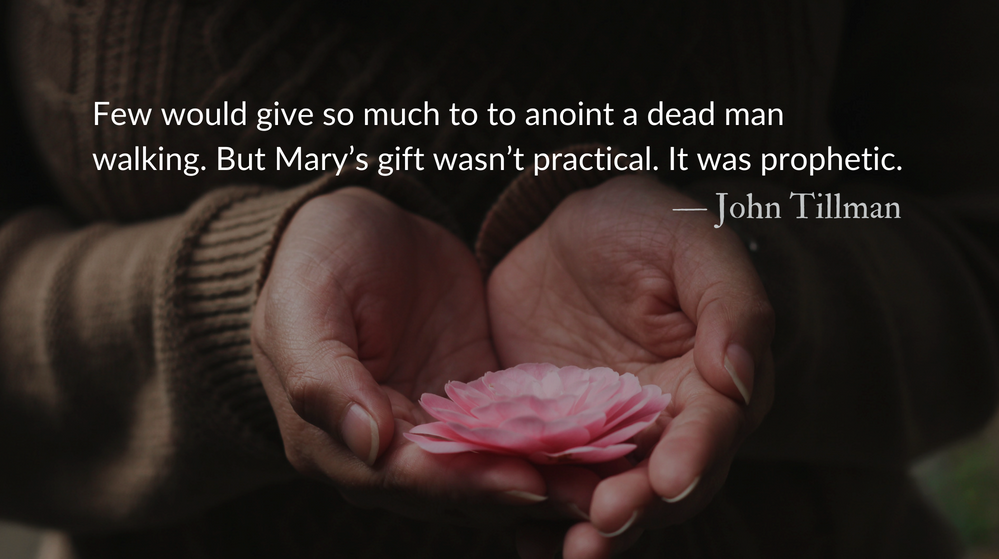 The Fragrance of Faith :: Readers’ Choice

Selected by reader, Wade Edwards and reader, Kim in Vancouver, BC
Wade: I love how Mary had a vision for the future and acted based on that. Not worried about the things of this world. Truly she had faith.

Kim: This one was so aptly titled and I really liked the imagery of Jesus having Mary’s perfume as a comfort somewhat, during the lonely hours when he was crucified.

Truly I tell you, wherever this gospel is preached throughout the world, what she has done will also be told, in memory of her. — Matthew 26.13

Reflection: The Fragrance of Faith :: Readers’ Choice
By John Tillman

Mary of Bethany’s anointing of Christ on his last trip to Jerusalem is intimately connected to the gospel—Christ said that it would be.

What makes Mary’s extravagant offering in any way related to the gospel?

It was a sacrificial gift. The most obvious reason is the extravagance of the gift itself—it was worth a year’s wages. (2016 median earnings for men in the United States were $51,640 and $41,554 for women .) This jar was very likely an heirloom given to Mary to ensure financial stability and independence. It may even have passed to her when Lazarus died as a part of his provision for her.

Many would give $50,000 to a practical need, like a loved one’s surgery, to feed the homeless, or to dig a well. But few would give so much to bless an intentional loss—to anoint a dead man walking.
But Mary’s gift wasn’t practical. It was prophetic.

In John’s gospel, Jesus makes clear that Mary has fulfilled the prophetic purpose of the gift as, “It was intended…for the day of my burial.“ Mary alone among the disciples has understood Christ’s prophecies. She anoints him with the same fragrance that is offered before the Lord in the Temple, because she knows that he is the the final priest, the final offering, the final sacrifice.

It was a lasting gift. Nard in this form, especially when applied to the hair and body is a long lasting fragrance. Throughout his ordeal over the next 48 hours, the gift of Mary’s faith would hang about Christ—the fragrance of her faith.

When they ripped out his beard, they would stir up the perfume. When they flogged the skin from his back, the scent would rise as his blood fell. When they pressed the thorns into his head, his hair would release more of the fragrance. When he choked on vinegar to drink, the smell of her gift would still be there.

She sacrificed her only security in this world, for the security of the next. She placed her full self on the altar with Christ. She gave up her agency in the world, gave up her ability to provide for herself, and provided Christ with a remembrance of the disciple who understood.

May we make extravagant, prophetic, and lasting gifts to Christ and to the spreading of this gospel, like a fragrance, throughout the world.

Prayer: The Call to Prayer
Worship the Lord in the beauty of holiness; let the whole earth tremble before him. — Psalm 96.9

Additional Reading
Read More about the Tomb of the Unknown Savior
Mary of Bethany may have been the only disciple who realized Jesus was about to die a sacrificial death. But it seems only his enemies remembered that Christ also promised to come back to life.

Read More about Sacrifice of Self
Ultimately we have been called to imitate our self-sacrificing savior, Jesus, by giving of ourselves to do good for the benefit of others.

Readers’ Choice
We have a handful of spots left for your favorite posts of the year. Submit a Readers Choice post. Tell us about a post and what it meant to you.