Scripture Focus: Genesis 21.2-24
22 At that time Abimelek and Phicol the commander of his forces said to Abraham, “God is with you in everything you do. 23 Now swear to me here before God that you will not deal falsely with me or my children or my descendants. Show to me and the country where you now reside as a foreigner the same kindness I have shown to you.”
24 Abraham said, “I swear it.”

Matthew 20.25-28
25 Jesus called them together and said, “You know that the rulers of the Gentiles lord it over them, and their high officials exercise authority over them. 26 Not so with you. Instead, whoever wants to become great among you must be your servant, 27 and whoever wants to be first must be your slave—28 just as the Son of Man did not come to be served, but to serve, and to give his life as a ransom for many.”

Abimelek was a pagan king with his own gods and sinful practices. His descendants would be Israel’s enemies. Yet, he is one of a very short list of people to whom God spoke directly in a dream. (Genesis 20.1-6) Abraham, by God’s command, prayed for Abimelek, blessed him, and lived under Abimelek’s rule, making a treaty with him.

Rulers are established by God, (Romans 13.1-10) but establishing does not mean endorsing. Far from it. Rulers, good or evil, are used by God for good purposes, but every ruler will be held accountable by God.

As the “watchman on the wall” is responsible for the lives of those he serves, (Ezekiel 33.1-9) leaders will be held to account for evil, injustice, and violence under their rule. Whether evil is done at their command, committed by their followers, occurs through negligence, or merely remains unpunished, God will judge rulers.

Jesus’ assessment of Roman leadership is true of our leaders today. Indeed, most democracies around the world looked with rose-colored, Western-centric glasses, to the Romans and Greeks for inspiration in founding modern governments. They saw the ideals but not the dirty business and corruption that Jesus knew up close.

The disciples and the crowds that followed Jesus constantly thought Jesus would take over the government. Even right up to the moment of the ascension, they thought, “Now. He’s going to tell us to fight for him now.” (Acts 1.6-9) They were wrong.

Believers today who feel a religious compunction to political violence are serving an idolatrous, man-made religion, not Jesus.

God’s people have lived peaceably under governments of all different kinds. God’s people have been faithful under rulers with vastly differing degrees of personal morality, honor, and respect for God.

No matter the morality or immorality of our leaders, Christians are responsible to be servants of a different kingdom and to exercise power in the opposite way the world does.

From John: Writing this two days away from the inauguration of Joe Biden, tensions are high. Suspicions of violence are in the air. Personal friends and former ministry partners may be among those sympathizing with violence against the United States government. It has been a week of personal mourning and lament. We pray today that all believers would be citizens of peace, submitted to their governments in humility and grace. Only in the proclamation of the gospel do we have leave to obey God rather than men. In all other things, we submit.

Divine Hours Prayer: A Reading
Jesus said to us: “In truth I tell you, anyone who does not welcome the kingdom of God like a little child will never enter it.” — Luke 18.17

Read more about Responding to Political Violence
It seems more and more Christians are willing to whitewash politically motivated violence as necessary self-defense.

Scripture Focus: Matthew 19.7-10
7 “Why then,” they asked, “did Moses command that a man give his wife a certificate of divorce and send her away?”
8 Jesus replied, “Moses permitted you to divorce your wives because your hearts were hard. But it was not this way from the beginning. 9 I tell you that anyone who divorces his wife, except for sexual immorality, and marries another woman commits adultery.”
10 The disciples said to him, “If this is the situation between a husband and wife, it is better not to marry.”

Genesis 21.13
13 I will make the son of the slave into a nation also, because he is your offspring.”

Luke 15.16-17
16 He longed to fill his stomach with the pods that the pigs were eating, but no one gave him anything.17 “When he came to his senses, he said, ‘How many of my father’s hired servants have food to spare, and here I am starving to death!

Reflection: Waking Up With Pigs
By John Tillman

Moses (not God) “permitted” divorce and Abraham sent his “slave wife” away (in tomorrow’s reading) for the same reason. This reason was explained by Jesus generations later:

“Because your hearts were hard…”

God offers grace even for our worst, hard-hearted mistakes in which we misunderstand or disobey him. Abraham and Sarah sought solutions from their own culture instead of relying on God’s promise. They twisted God’s plan to justify sexual exploitation and their sin produced a “slave wife” and a “son of a slave.”

Their hearts were hard. They did not believe God fully and they rationalized that the ends justify the means. Then their hearts became harder. When they realized their error, they rejected the evidence of their sin by sending Hagar and the child away. Though they hardened their hearts, God did not. God saved Hagar from her situation and blessed the child produced from her victimization.

Each time a person rejects God’s heartfelt invitation, their heart grows a little harder. Each time they look away from his outstretched arms, their sight dims. Each time they tune out his calls and cries to repent, their sense of hearing diminishes.

Even Christ’s disciples missed the point of his message. They thought the solution to the question about divorce was not to marry.

“If we don’t marry, we don’t have to be soft-hearted.”

God deals with hard-hearted people throughout the Bible. God is consistently calling, pleading with the hard-hearted to return to him. He holds out love and kindness to coax them. He grants them mercy and grace if only they will return.

Our hard-hearted errors can be redeemed by our loving God, but the better lesson to remember is that our hard hearts can be softened again. In humbling, shocking moments the hard-hearted can come to our senses like the prodigal among the pigs.

Have Christians awakened to find ourselves among a trampling herd of violent pigs? Are we shocked awake to the shame of our state? Have we recognized our hunger for the pods the pigs are eating? Perhaps, having a taste of the pods can finally turn our stomach and wake revulsion for our wrongdoing.

Let us return to our loving father, quitting the pig-sty, abandoning our stubbornness. Let us humble ourselves, soften our hearts, and return home.

Read more about Seeking Righteousness
There should be a clear and recognizable difference in the way that Christians interact with social and political unrest because we are not a people of unrest.

Read more about Leaders Against Oppression
May we work to ensure that the powerful are warned not to be abusive. May we live in such a way that others will not be dispossessed. 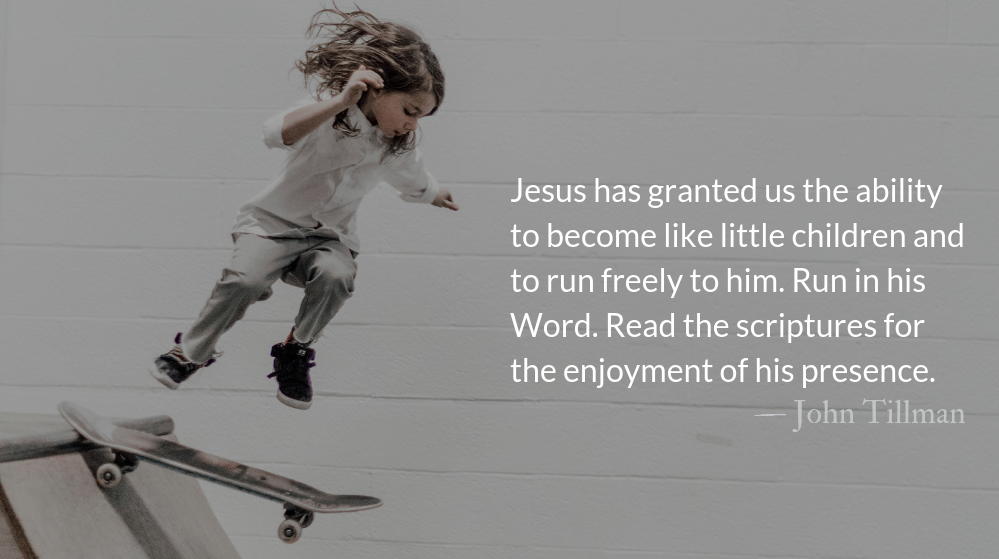 We often repeat our vision that God’s Word can be in our lives like a park in a city. There are many facets to that vision.

Parks bring many benefits to a city that are analogous to the benefits of regularly entering into God’s Word. But the one we focus on today, using the prayer included below, is on recreation.

But there is a special joy that can be found when we explore God’s Word as a child exploring a park, with no intention other than the pleasure of reading the words that our Heavenly Father has given us.

Jesus has granted us the ability to become like little children and to run freely to him. Run in his Word this weekend. Read the scriptures for the enjoyment of his presence.

The prayer below celebrates the freedom that the Father has given us through Christ, speaking, “yes,” over us, freeing us from the dictator of selfishness, and allowing us to become his people—his children.

A prayer of praise and thanksgiving from Germany
Lord Jesus, we thank you
That you have shared with us
The Father’s love
That you have entered the ambiguity
Of our history,
And spoken the Father’s YES
Into our lives.

Spirit of God, we thank you
That you have brought the riches of salvation
Into the poverty of our human experience.

We praise you, our God,
For calling us into existence,
For liberating us from our unbending self-will,
And for sharing your life with us.

Gracious God, Father, Son and Holy Spirit
Source of our living, and hope in our dying,
Touch our life with your grace,
Set us free to become your people
And grant us the privilege of joining your passion
For the world.

Prayer: The Request for Presence
I call with my whole heart; answer me O Lord, that I may keep your statutes.  — Psalm 119.145

Are you interested in joining an online community to share with The Park Forum readers? Email us at: info@theparkforum.org

Read more about How to Find Freedom
What power there is in pure love for Jesus—love that is free from all self-interest and self-love! — Thomas à Kempis

Read more about Prayer as Relationship :: Readers’ Choice
Many have faithfully lived out Christ’s command to let the little children come to him. But perhaps no one in history has lived it out affecting as many children as Fred Rogers.