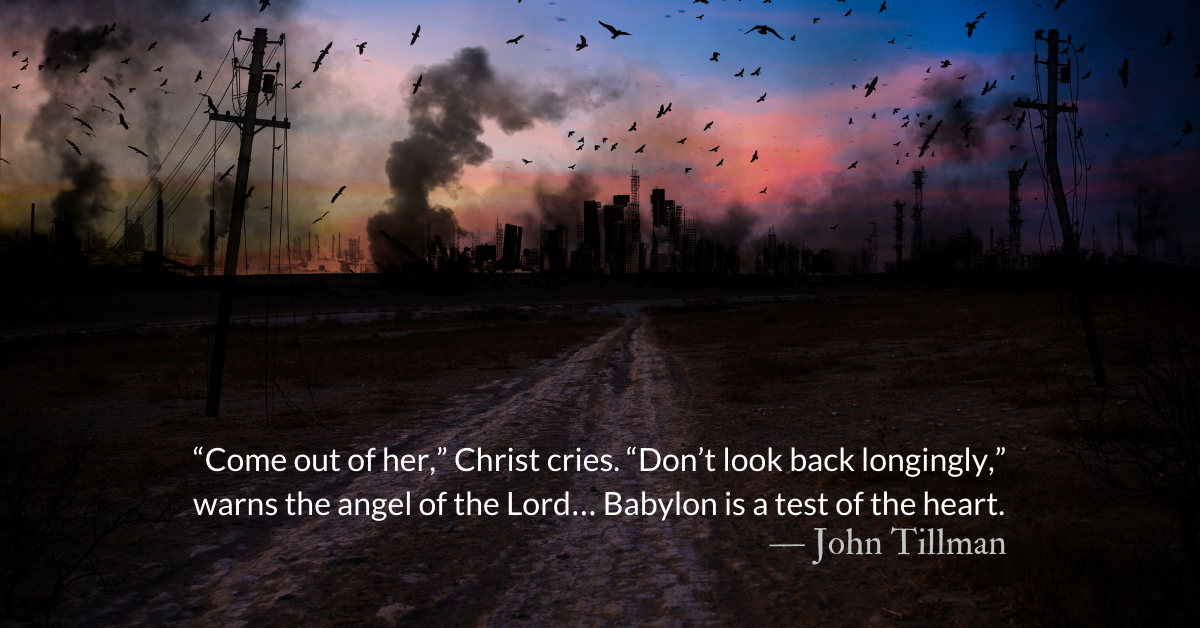 Come Out of Babylon

Scripture Focus: 2 Chronicles 32.31
31 But when envoys were sent by the rulers of Babylon to ask him about the miraculous sign that had occurred in the land, God left him to test him and to know everything that was in his heart.

Revelation 18.4-7
4 Then I heard another voice from heaven say:
“ ‘Come out of her, my people,’
so that you will not share in her sins,
so that you will not receive any of her plagues;
5 for her sins are piled up to heaven,
and God has remembered her crimes.
6 Give back to her as she has given;
pay her back double for what she has done.
Pour her a double portion from her own cup.
7 Give her as much torment and grief
as the glory and luxury she gave herself.

Reflection: Come Out of Babylon
By John Tillman

During Christmastide, leading up to Epiphany, we consider the revelation of Jesus to the Gentile nations as the light of the world.

Part of the Revelation of Christ’s Kingdom is the revelation of the sinful darkness of the kingdoms we live in. Part of why Christ comes is to rescue. Wickedness will be stripped and torn down. But whoever is willing to be saved, can be pulled out, picked up, raptured from the clutching darkness of the world.

Babylon thought itself to be a light to the world and today’s empires think the same. Do we, as Christians from around the world, think of our own nations in this way?

Many of us seem to. Many Christians are more enthusiastic evangelists for political or economic systems than the gospel. For some Christians, political parties have become our true religion. Some think of our nation as “The Kingdom of God” instead of God’s worldwide church. This is what Babylon does. It replaces the worship of God with the worship of nation, tribe, and self.

Hezekiah was one of the greatest kings of Judah. His downfall began by pridefully entertaining powerful visitors from Babylon, even showing them the Temple and its decorations. All that he showed them, including his own children, would soon be stolen, destroyed, or enslaved by Babylon.

In Revelation, John records a call from Heaven for God’s people to “come out” of Babylon. This mirrors the call to Lot’s family to come out of Sodom. Even knowing that destruction was coming, Lot’s family clung with longing to the city they were a part of. They had to be taken, grasped, pulled by the hand to leave. Lot’s daughters had to leave behind their promised husbands, who laughed off Lot’s invitation to salvation. (Genesis 19.14-16)

“Come out of her,” Christ cries. “Don’t look back longingly,” warns the angel of the Lord…

Babylon is a test of the heart. We can become entangled in Babylon and engaged to Sodom. How wedded to Sodom and Babylon are we?

No nation should have a grip on our heart greater than the gracious kingdom of our Christ.
Come quickly, O Christ. Grasp our hands, Lord, and lead us out.

Divine Hours Prayer: The Request for Presence
Be seated on your lofty throne, O Most High; O Lord, judge the nations. — Psalm 7.8

Read more about Supporting our Work
Our work needs your support. If you can’t donate, share with us a thank you that we can pass on to our donors.

Read more about Ready to Exit the Desert
May we leave sin and doubt in the desert, crossing the Jordan toward God’s calling to be his city on a hill. 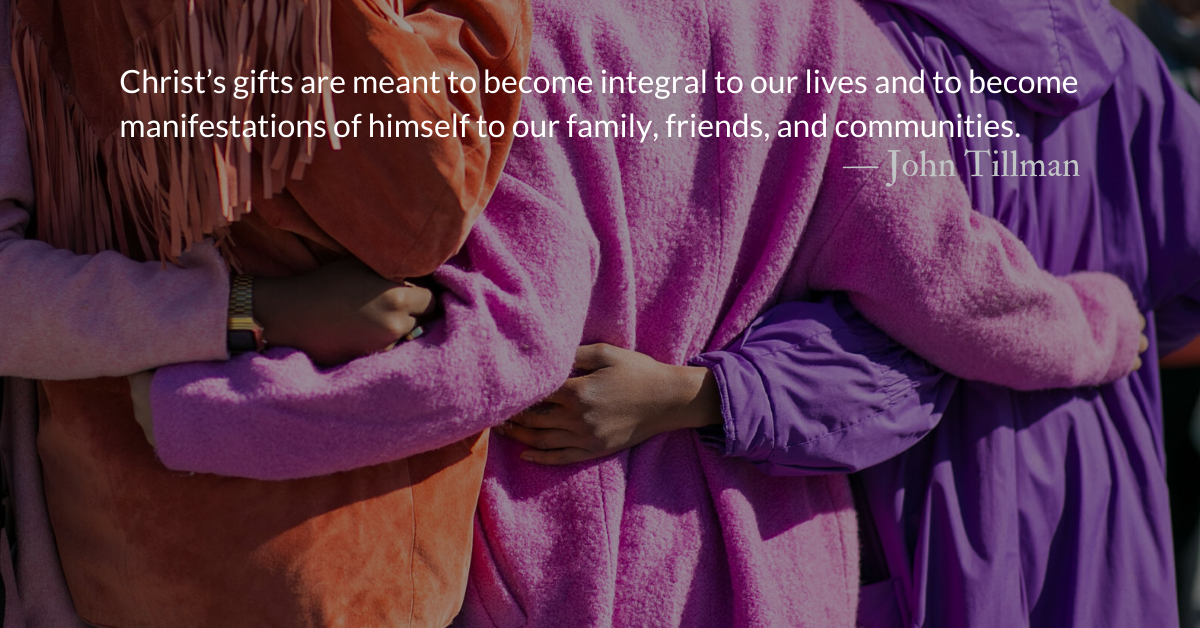 Scripture Focus: Luke 4.18-20
“The Spirit of the Lord is on me,
because he has anointed me
to proclaim good news to the poor.
He has sent me to proclaim freedom for the prisoners
and recovery of sight for the blind,
to set the oppressed free,
to proclaim the year of the Lord’s favor.”

Then he rolled up the scroll, gave it back to the attendant and sat down. The eyes of everyone in the synagogue were fastened on him. He began by saying to them, “Today this scripture is fulfilled in your hearing.”

The Annunciation of the birth of the King of Kings had come quietly to Mary, a young girl in Nazareth, and when that King’s time had come, he announced his kingdom in the same synagogue he studied in as a young boy. Mary’s son chose to announce his true identity to those who knew him best. He chose to proclaim the presence of the kingdom of God in a town from which true Israelites believed nothing good could come.

It should not surprise us that Jesus chose to make one of his earliest and most direct claims to being the Messiah not in a rabbinical school, not in the temple, not in a court of law, nor in the courts of political power.

Jesus consistently chose to minister in out of the way places to people life had pushed out of the way. But here in Nazareth, Jesus wasn’t burying the lead; he was burying a treasure in a field. Those who studied the prophecies knew that the Messianic ministry would dawn like a light in Galilee. Christ’s seeming retreat from more important locations, is actually a marker of his true nature as the foretold Messiah.

Christ’s gifts to us are at first concealed, like gifts under a Christmas tree. They are hidden in plain sight for us to wonder at, to shake, to puzzle over, and ultimately to open and rejoice over. But, after opening, gifts become a part of you when you accept them. Whether it is a tool that is used regularly, an item of clothing that is worn often, or a book, game, or other entertainment that engages our mind and imagination, good gifts integrate themselves into our lives and identities.

Christ’s gifts are meant to become integral to our lives and to become manifestations of himself to our family, friends, and communities. As we approach Epiphany over the next ten days, may we wear Christ’s gifts prominently, like new and well-loved items of clothing. Through the wearing, may we allow them to transform us into the manifestation of the giver.

Thank You, Donors!
We are thankful for our donors’ gifts because they show the work of God in our donors’ hearts and their willingness to contribute to improving the spiritual discipleship of readers around the globe. We could not do this without them! Thanks to our donors, in 2019 we have published approximately 100,000 words of free, and ad-free, devotional content.

As the end of the year approaches, consider whether the Holy Spirit might be prompting you to help support our 2020 content with an end-of-year gift or by becoming a monthly donor. Follow this link to our giving page.

Read more about The Purchase Price of Peace :: Peace of Advent
The peace God spoke would come at a cost, and shedding his glory and light to be born in a dim and dirty animal stall, was only the down payment.

Read more about Supporting our Work
We need and pray for donors of all amounts, and for those who can donate every month as well as those who donate once-a-year or at other intervals.