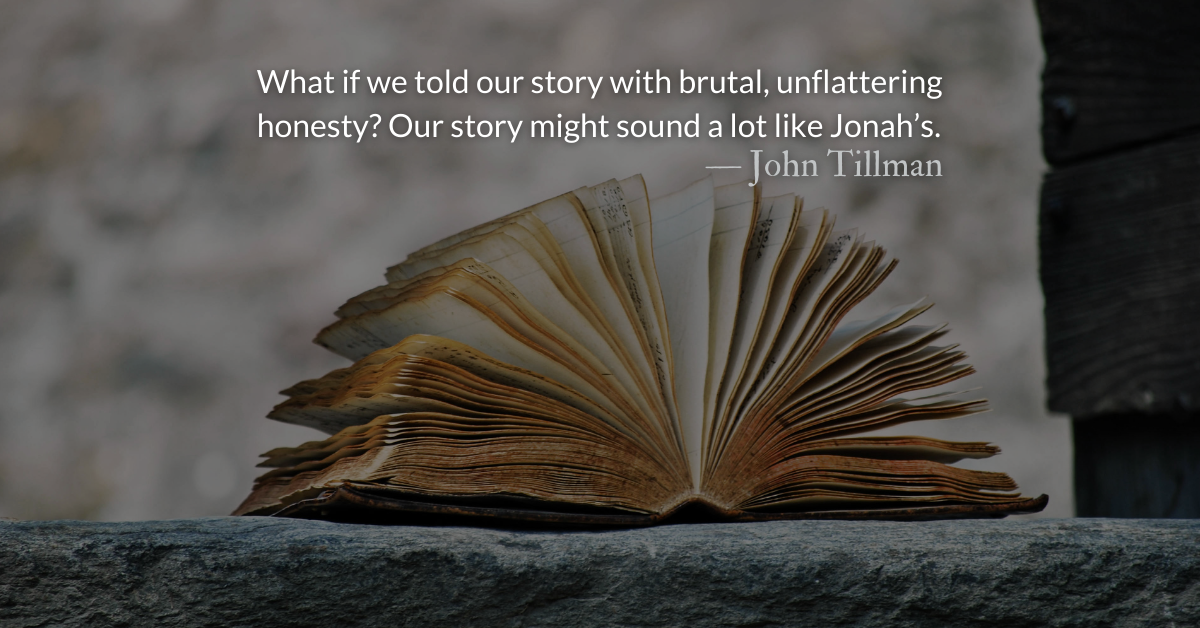 Who Tells Your Story?

Scripture Focus: Jonah 2.1
From inside the fish Jonah prayed to the Lord his God. 2 He said:
“In my distress I called to the Lord,
and he answered me.
From deep in the realm of the dead I called for help,
and you listened to my cry.

“You have no control. Who lives? Who dies? Who tells your story?” — Hamilton, by Lin Manuel Miranda

Reflection: Who Tells Your Story?
By John Tillman

We’ve been pretty hard on Jonah in most of our writing. How could we not?

He gave a pass to Israelite corruption but condemned Nineveh. He thought God was wrong to be merciful to his enemies and was so mad about it he wanted to die. His prayer from the belly of the beast (from today’s reading) is beautiful, but even that was mostly self-focused. After his miraculous escape from the fish (and perhaps resurrection), he obeyed only the letter of God’s command. He hoped the message of repentance would fail. His heart longed for destruction rather than mercy.

Many scholars believe another scribe or chronicler wrote this book, perhaps using Jonah’s own accounts as a source and quoting Jonah’s prayer. However, early Jewish and Christian scholarship maintained that Jonah was the author.

What if this unflattering account of Jonah was written by him as an act of repentance?

Jonah is the only account in scripture in which the “title character” could be considered the villain. If it is written by Jonah, it is a remarkable work of confession. The text does very little to build sympathy for Jonah’s actions. Information could have been included about how wicked and evil Ninevah was, however, Jonah gives us none of that. If you researched the brutality of the Assyrians you might sympathize with Jonah, but the text itself makes no plea to nuance.

Lessons from Jonah go beyond “obey God” or “love all people.”

Academically, I lean toward the text being compiled/written by someone else but artistically and emotionally I hopefully believe that Jonah wrote it in contrition. Jonah is a great prophet to study in our age of outrage. We want people to see the nuance in our position and justify all of our worst takes and actions.

However, Jesus writes us a new story filled with his righteousness instead of our sinfulness. Our story becomes Jesus’ story and his becomes ours. We can afford to be unsympathetically honest about our sins because Jesus is the anti-Jonah, giving his life in exchange for his enemies and considering such suffering “joy.” (Hebrews 12.1)

Confess your story. Then let Jesus tell his version of it.

Divine Hours Prayer: The Greeting
Your testimonies are very sure, and holiness adorns your house, O Lord, forever and forevermore. — Psalm 93.6

Read more about Confession as a Crucible
May the flames of suffering that some may think will destroy us be used by your Holy Spirit to purify and strengthen us.

Read more about From the Belly of the Beast
When in the belly of one of the beasts of this world, may we turn to prayer…more powerful in the dark than it ever was in the light.