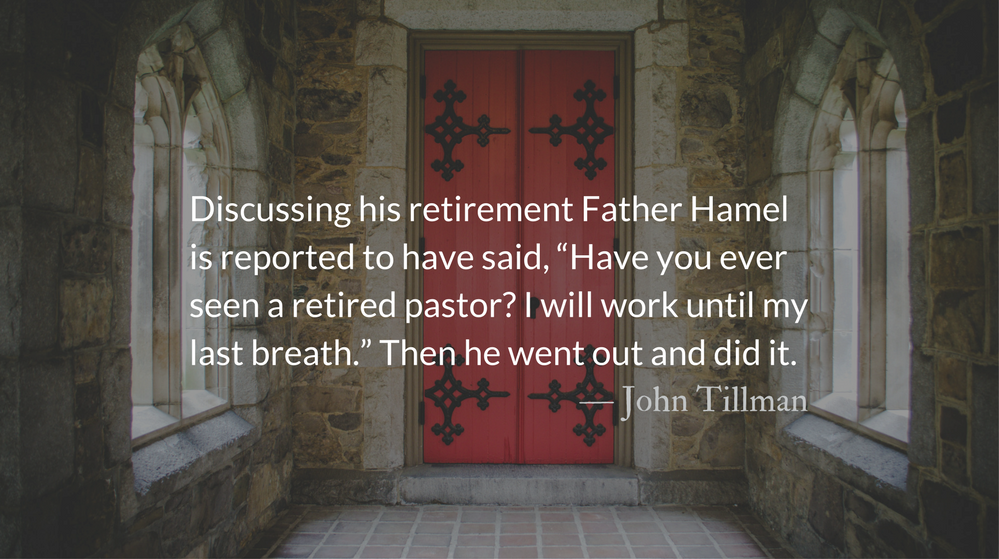 Scripture: Titus 1.1-2
Paul, a servant of God and an apostle of Jesus Christ to further the faith of God’s elect and their knowledge of the truth that leads to godliness—in the hope of eternal life, which God, who does not lie, promised before the beginning of time…

Even though Western Christians are not facing anything that could truly be called persecution, it is still possible, even in a modern, Western, Christian church to be martyred. Yesterday, and today we are looking back at a not-so-recent story of a martyr that never really made it into the headlines and reflect on where martyrdom begins for every Christian. — John

As terrible as Father Jacques Hamel’s death was, on July 26th 2016, it was over in nearly an instant, especially when contrasted against his 85 year life and his over half-century of priestly labor.

Father Hamel gave his life when he took up the mantle of calling himself a follower of Christ. He then gave it up formally and vocationally on June 30, 1958 when he became a priest. And he continued to give it up functionally, day-by-day, serving the community until the day he died. Discussing his retirement he is reported to have said, “Have you ever seen a retired pastor? I will work until my last breath.” Then he went out and did it.

Giving up your life for others, doesn’t always mean that you die. An example of this is the nun, Sister Danielle, who escaped the church as the attackers were distracted while executing Hamel. She flagged down a motorist, and brought the authorities. She did this at risk of her own life, and her action ensured the men could do no further harm to the community.

Father Hamel and Sister Danielle — one running out the door to bring help, one bleeding out on the floor of the church — both gave up their lives to stop further violence. Both took up their crosses, one for the final time and one who will continue to do so for the rest of her life.

Yes. Physically giving up your life — being martyred — on behalf of others is loving as Christ did on one day of his life. But giving up your rights purposely, embracing humiliating servitude to help others, and doing it with a heart of love and not resentment, is how Christ loved us on every other day of his life.

Father Hamel’s martyrdom didn’t begin at knifepoint; it began at an altar. It is there — at an inner altar of sacrifice — that every believer’s martyrdom should and must begin. We must live as sacrifices every day, ready for any day to be the final day.

It is not through our own bravery or strength that we can do this, but only through reliance on Christ. Relying on their own bravery, Christ’s disciples fled his side, abandoned him, and broke their oaths.

Martyrdom is merely completed at the hands of aggressors. It begins in each of us. Not everyone, thank God, will be a martyr. But every believer who lives, and loves as Jesus commanded, must daily embrace such an end.

Revised and abridged from a post on Garage For Faith.

The Greeting
Save us, O Lord our God, and gather us from among the nations, that we may give thanks to your holy Name and glory in your praise. — Psalm 106.47