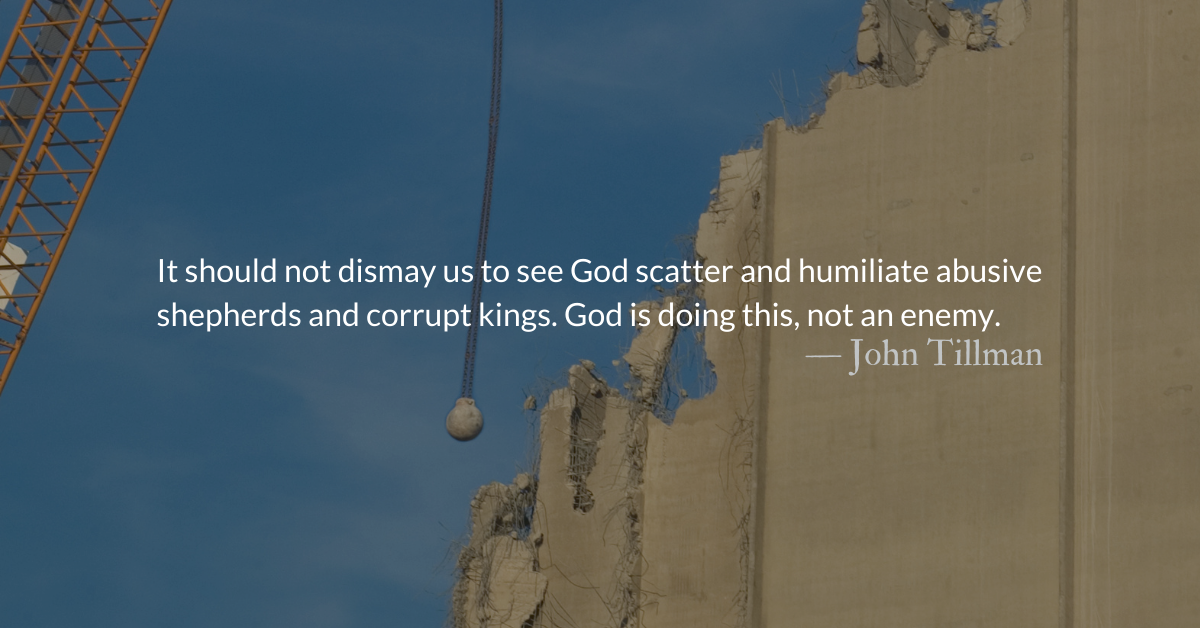 When God Shakes Our Foundation

Scripture Focus: Amos 9.1a, 11-13
1 I saw the Lord standing by the altar, and he said:
“Strike the tops of the pillars
so that the thresholds shake.
Bring them down on the heads of all the people;

11 “In that day
“I will restore David’s fallen shelter—
I will repair its broken walls
and restore its ruins—
and will rebuild it as it used to be,
12 so that they may possess the remnant of Edom
and all the nations that bear my name,”
declares the Lord, who will do these things.
13 “The days are coming,” declares the Lord,
“when the reaper will be overtaken by the plowman
and the planter by the one treading grapes.
New wine will drip from the mountains
and flow from all the hills,

Reflection: When God Shakes Our Foundation
By John Tillman

Amos describes God standing by the altar and striking the pillars to bring the structure down on the people. This image is reminiscent of Samson’s destruction of the temple of Dagon. (Judges 16.23-30) Why would God treat his own Temple like Samson treated the temple of Dagon?

The people worshiped other idols alongside God, even placing images of these idols in God’s Temple. In doing so, they made him equal to those idols. To God, the elaborate temples, in Samaria and Jerusalem, had become little more than tents of wickedness.

The people reduced God to an idol so, in Amos’s vision, God reduces the Temple to rubble which falls and crushes the people. In fulfillment of this vision the Assyrians and Babylonians would crush both nations and both temples would be burned, torn down, and reduced to rubble.

God brings judgment beyond his people as well. Amos describes God going to the ends of the earth (and below it and above it and to the depths of the sea) to bring vengeance to the wicked. (Amos 9.2-4)

God is determined to renovate this world, starting with his church and his people. And renovation always starts with demolition. When leaders, churches, and organizations fall after revelations of misconduct and sin some have a tendency to blame “enemies of the church.” This is unbiblical. It is God, not Satan, who works to destroy corruption in the church. When sin is revealed and an organization crumbles, it was God who struck the blow, not an enemy.

It should not surprise us to see the foundations of our churches shaken when wickedness has been covered up. It should not dismay us to see God scatter and humiliate abusive shepherds and corrupt kings. God is doing this, not an enemy. God is striking our pillars. God’s church is renewed by the removal of corrupt leaders.

What idols have we set beside God in the temples of our hearts and in our houses of worship?

God seeks us as individuals and as his church, longing to heal us if we will let him. The razed can be rebuilt. The ruined can be restored. The uprooted can be replanted.

Divine Hours Prayer: A Reading
Jesus said to us: “…Everything now covered up will be uncovered, and everything now hidden will be made clear. What I say in the dark, tell in the daylight; what you hear in whispers, proclaim from the housetops.” — Matthew 10.26-27

Read more about One Worth Rejoicing In
We have seen many leaders in the mold of Asa…They win early, joyful victories…but eventually are exposed as corrupt, cynical, immoral, or power-obsessed.

Read more about Misleading the Least
Jesus has a stark warning for leaders and influencers who cause “little ones” to stumble…one of the most graphic pictures of punishment to cross the lips of Jesus.