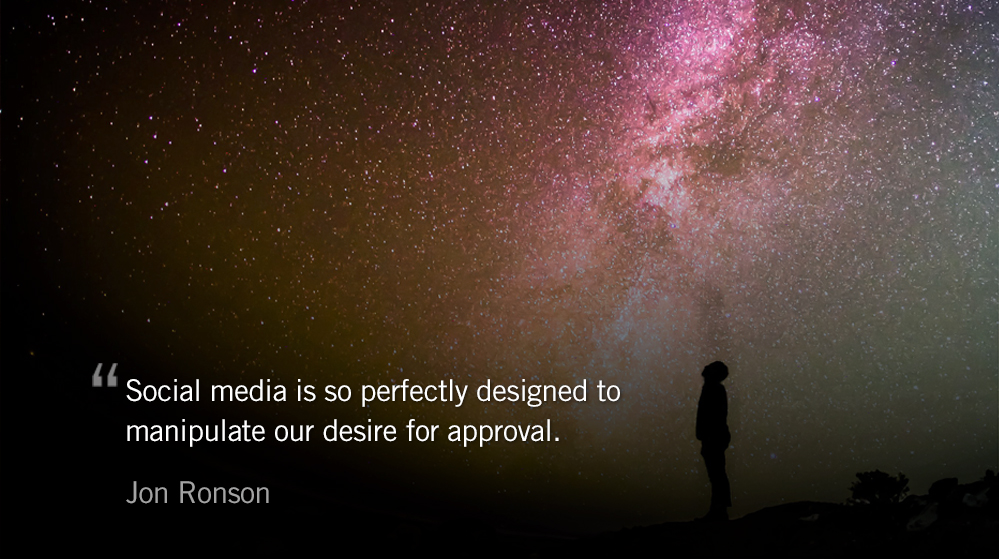 Scripture: 1 Timothy 3.7
He must also have a good reputation with outsiders, so that he will not fall into disgrace and into the devil’s trap.

Social media is so perfectly designed to manipulate our desire for approval. — Jon Ronson

The full removal of evil in our world is one of the breathless longings of Christianity. We hopefully await a time where death, cancer, genocide, abuse, and countless other atrocities are vanquished. And though we count on this, it can be difficult to picture life without the petty evils that accost us daily.

We don’t even think of things like stress and life’s regular anxieties and discouragements as stemming from evil—perhaps because we try to individualize evil and these are systemic forces that plague us all. Though we have sinned, we are also all victims of a broken world.

Shame and bullying, which in the past were among the ongoing pains of our world, have taken on a force of their own through the internet. Far too many people—some who have done legitimate wrong others who were simply imprudent or taken out of context—have had their lives destroyed by a maelstrom of anonymous digital hate. In extreme cases people have lost jobs, struggled with depression and PTSD, and had to leave their home after their addresses were posted online and linked to death threats.

We once glorified Twitter as a great global town square, a shining agora where everyone could come together to converse. But I’ve never been to a town square where people can shove, push, taunt, bully, shout, harass, threaten, stalk, creep, and mob you.

Twitter could have been a town square. But now it’s more like a drunken, heaving mosh pit. — Umair Haque

Though this disproportionately affects children and students, the modern digital age has made it something nearly all of us can suffer from as victims—or participate in as perpetrators.

A marketplace has emerged where public humiliation is a commodity and shame is an industry. How is the money made? Clicks. The more shame, the more clicks. The more clicks, the more advertising dollars. We’re in a dangerous cycle. The more we click on this kind of gossip, the more numb we get to the human lives behind it, and the more numb we get, the more we click. All the while, someone is making money off of the back of someone else’s suffering. With every click, we make a choice. — Monica Lewinsky

In her TED talk, “The Price of Shame,” Monika Lewinsky opens up about the profound toll public shaming can take on a person, “In 1998, I lost my reputation and my dignity. I lost almost everything, and I almost lost my life… The public humiliation was excruciating. Life was almost unbearable.”

Lewinsky’s talk focuses outside the guilt of her actions on the weight of public shaming—our active roll in disintegrating another human being through quips and clicks. “It was easy to forget that ‘that woman’ was dimensional, had a soul, and was once unbroken.”

In a Medium post this month Umair Haque, who writes on economics and technology for the Harvard Business Review, chronicles the way technology has weaponized our ability to harm one another:

The social web became a nasty, brutish place… What really happens on Twitter these days? People have self-sorted into cliques, little in-groups, tribes. The purpose of tribes is to defend their beliefs, their ways, their customs, their culture — their ways of seeing the world… and if you dare not to bow down before it…or worse still to challenge it…well, then the faithful will do what they must to defend their gods. They will declare a crusade against you.

We are at the beginning of a large cultural conversation about shame, guilt, bullying, and behavior in the public square. Christians have the opportunity live as salt and light in a bland, rotting, and dark digital world. What we click, how we respond — if we we respond at all — shares a testimony to the world.

Nietzsche warned, “Be careful when you fight the monsters, lest you become one.” Though the gospel takes it one step further: “Do not be overcome by evil, but overcome evil with good.” In this‚ in what we post, and click, and share — we join Christ in bringing heaven to earth now.

The Refrain
Those who sowed in tears will reap with songs of joy. Those who go out weeping, carrying the seed, will come again with joy, shouldering their sheaves. — Psalm 126.6-7

Related Articles
Why Twitter’s Dying. Umair Haque on Medium.
How One Stupid Tweet Blew Up Justine Sacco’s Life. Jon Ronson for The New Yorker.
Monica Lewinsky and the Shame Game. Alexandra Schwartz for The New Yorker.
The Bully Business. Cevin Soling for The Atlantic.
Parents: Focus on the Family has a helpful web resource on bullying among kids.