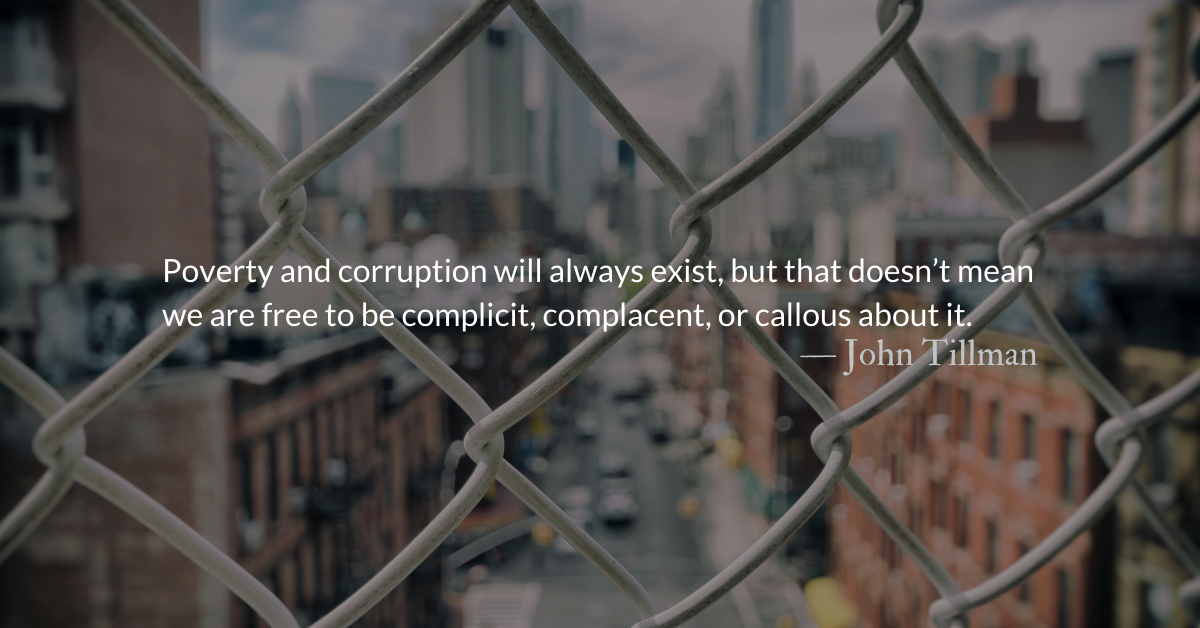 Scripture Focus: Ecclesiastes 5.8-10
8 If you see the poor oppressed in a district, and justice and rights denied, do not be surprised at such things; for one official is eyed by a higher one, and over them both are others higher still. 9 The increase from the land is taken by all; the king himself profits from the fields.
10 Whoever loves money never has enough;
whoever loves wealth is never satisfied with their income.
This too is meaningless.

From John: As this re-written post from 2018 reminds us, we should never be surprised to find oppression, cruelty, poverty, or any other evil in the world. We also should never willingly be complicit in it or passively give approval to it.

Solomon, the teacher of Ecclesiastes, says, “do not be surprised” to see oppression of the poor and systemic corruption in the government. Jesus, the teacher of Galilee, says the poor will always be with us. (Matthew 26.11) Either of them would be shocked to find their words abused today as endorsements of a laissez-faire attitude toward poverty and oppression.

Rather than an endorsement, Solomon’s statement is a confession of complicity. The profit of the corrupt system, and the guilt for it, passes up the chain of authority and distributes itself throughout the entire economic system to every citizen. The king himself profits from the fields and Solomon calls this profit, “meaningless.”

Christ’s words, often misquoted by politicians looking to cut social spending, reference an Old Testament passage everyone in the room would have instantly recognized. (Deuteronomy 15.11) The other half of the verse is, “Therefore I command you to be openhanded toward your fellow Israelites who are poor and needy in your land.”

This passage comes from the abandoned economic practices of Jubilee. (Deuteronomy 15.1-11) Under this system, debts (regardless of their origins or the wisdom of the debtors) were to be forgiven every seven years, including a complete reset of property rights once in a generation. (Leviticus 25.10-17)

There is little biblical evidence that the system was ever followed as God prescribed it. If it had been followed generational poverty would be impossible. However, the pull of meaningless profit and gain for gain’s sake was too strong for ancient Israel and is too strong for us today.

As the teacher says:
Whoever loves money never has enough;
whoever loves wealth is never satisfied with their income.
This too is meaningless.

The meaninglessness of accumulating wealth is a universal symptom of our sinful condition. We are all affected by it, from the top economic strata to the bottom.

The Bible doesn’t exist to dictate an economic system. Neither Capitalism nor Marxism are on trial. Our hearts are. The Bible commands us to be generous not just with tangible resources, but by influencing the way our culture thinks about poverty. Instead of condemning and blaming the poor for their own oppression, may we speak words of truth and comfort backed up with tangible aid.

Poverty and corruption will always exist, but that doesn’t mean we are free to be complicit, complacent, or callous about it.

Divine Hours Prayer: The Refrain for the Morning Lessons
Let integrity and uprightness preserve me, for my hope has been in you. — Psalm 25.20

Read more about Stories of the Redeemed
What is your story of redemption? Tell it to someone who needs a turnaround.

Read more about Blood Spilled
We need the Holy Spirit to confront us with the enormity of injustice around us and to stop saying, “I am innocent. I have not sinned.”