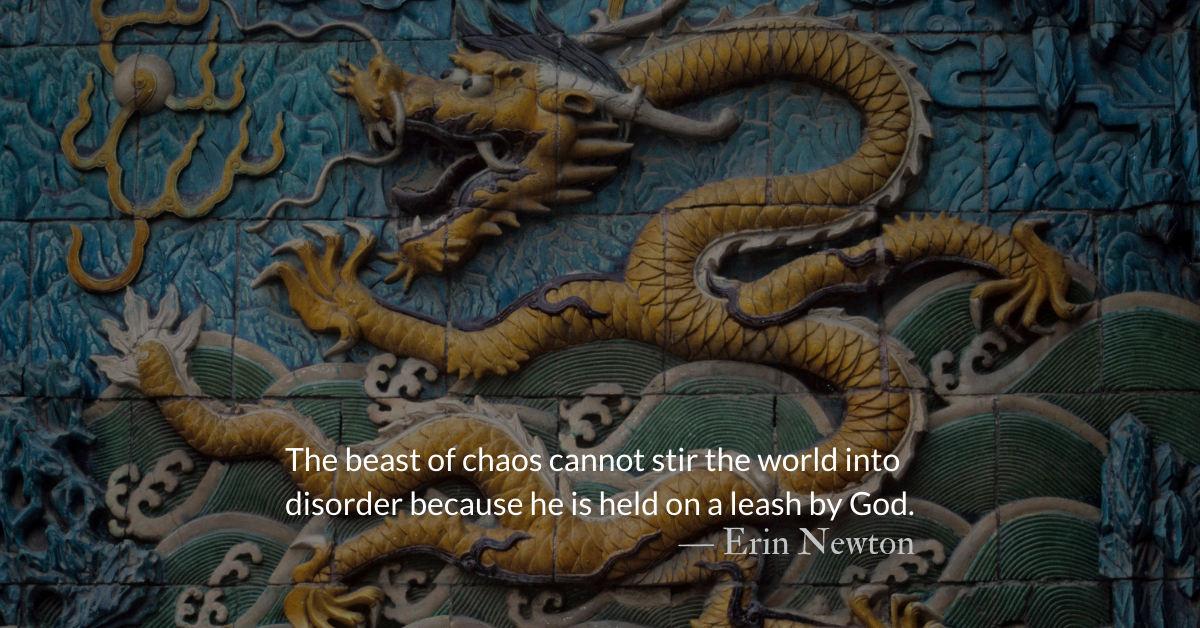 The Struggle against Chaos

Scripture Focus: Job 41.1, 33
1 Can you pull in Leviathan with a fishhook
or tie down its tongue with a rope? …

33 Nothing on earth is its equal—
a creature without fear.

From John: Erin typically has been covering Wednesday but her specialty in her Master’s study included ancient near eastern mythology including chaos monsters such as mentioned in this chapter, so we switched it up. I’ve learned a lot from her. She’ll be presenting part of her research at the Southwest regional meeting for the Society of Biblical Literature on March 5, 2022, in Dallas. If you are in the area and of a scholarly persuasion, find more information at this link or register to attend here.

Reflection: The Struggle against Chaos
By Erin Newton

Chaos seems to be everywhere. Mobs overpowering a building. Countries poised for invasion. Cancer cells riddling a body. Christians tearing down the dignity of another. One of the thoughts we struggle with is the idea that all the events of life are haphazardly occurring, without meaning, spinning out of control.

Job’s life has been a tumultuous journey. His plea that God would hear him has been answered in a whirlwind. A steady inquisition about the creation has rained down. Where were you when…? Do you know how…? Who can do this…? Each question implies that God alone is able and Job is merely mortal. Then two mysterious creatures enter the scene. The land beast, Behemoth, and the sea-loving Leviathan become the conclusion of God’s response.

Leviathan has a coat of armor, a mouth ringed with teeth, snorting and breathing fire, incredibly powerful, and without equal. God warns that if you lay a hand on it, you will remember the struggle and never do it again! Some view this creature as a crocodile. Others prefer to look at the dragon-like features and recognize its mythic characteristics.

This dragon, or sea-serpent, is known as a chaos monster. The use of this imagery is a common ancient feature embodying a world lost in confusion and disarray. It is that which strikes fear in the hearts of people. It is that which threatens the peace, joy, and safety of men and women. For the ancient world around Israel, chaos monsters were those that could kill their deity and send unending famine to the world.

How can God comfort Job by talking about such a beast? How can Leviathan be the answer God gives to someone who suffers?

The rhetorical questions show the superiority and authority of God. The dragon is under the control of God, caught by a hook begging for mercy. It is both created and doomed for destruction (Psalm 104, Isaiah 27). The beast of chaos cannot stir the world into disorder because he is held on a leash by God.

We still feel the effects of chaos in the world. Disorder lurks beneath the surface of our daily lives. But there is hope: “We are hard-pressed on every side, but not crushed; perplexed, but not in despair; persecuted, but not abandoned; struck down, but not destroyed.” (2 Cor 4.8-9). No purpose of God’s can be thwarted.

Divine Hours Prayer: The Morning Psalm
Praise the Lord from the earth, you sea-monsters and all deeps;
Fire and hail, snow and fog, tempestuous wind, doing his will;
Mountains and all hills, fruit trees and all cedars;
Wild beasts and all cattle, creeping things and winged birds;
Kings of the earth an all peoples, princes and all rulers of the world;
Young men and maidens, old and young together.
Let them praise the Name of the Lord, for his name only is exalted, his splendor is over earth and heaven.
He has raised up strength for his people and praise for all his loyal servants, the children of Israel, a people who are near him. Hallelujah! — Psalm 148.6-14

Read more about an Unobligated God
God does not owe us salvation and forgiveness. But thank God that he pays debts that he does not owe.

Read more about Anxious Nights Between Destruction and Chaos
From the chaos of the sea and the wilderness wind, God brings order and a highway to salvation.