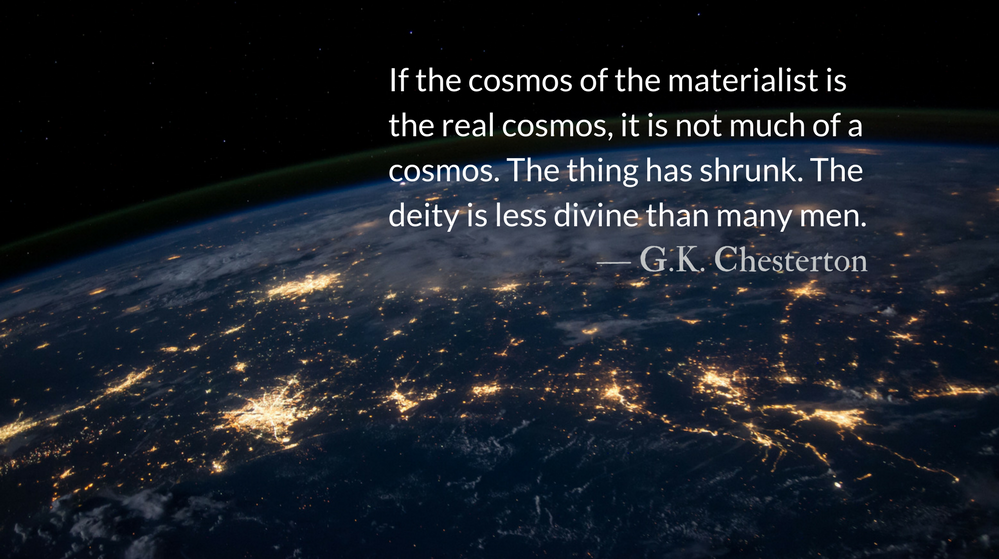 Scripture: 1 Corinthians 16.13-14
Be on your guard; stand firm in the faith; be courageous; be strong. Do everything in love.

Editor’s Note: Materialism today is more commonly used synonymously with Consumerism, but what Chesterton speaks of is a philosophy that denies the existence of anything other than matter.

This type of thinking is still quite popular today and is posited by many popular celebrity scientists who believe that a creator God is a farfetched concept yet have stated that it is probable we all live in a computer simulation.
— John

If the cosmos of the materialist is the real cosmos, it is not much of a cosmos. The thing has shrunk. The deity is less divine than many men; and (according to Haeckel) the whole of life is something much more grey, narrow, and trivial than many separate aspects of it. The parts seem greater than the whole.

For we must remember that the materialist philosophy (whether true or not) is certainly much more limiting than any religion. In one sense, of course, all intelligent ideas are narrow. They cannot be broader than themselves.

But if we examine the two vetoes we shall see that his is really much more of a pure veto than mine. The Christian is quite free to believe that there is a considerable amount of settled order and inevitable development in the universe. But the materialist is not allowed to admit into his spotless machine the slightest speck of spiritualism or miracle.

Poor Mr. McCabe is not allowed to retain even the tiniest imp, though it might be hiding in a pimpernel.

Prayer: The Small Verse
My soul thirsts for the strong, living God and all that is within me cries out to him.