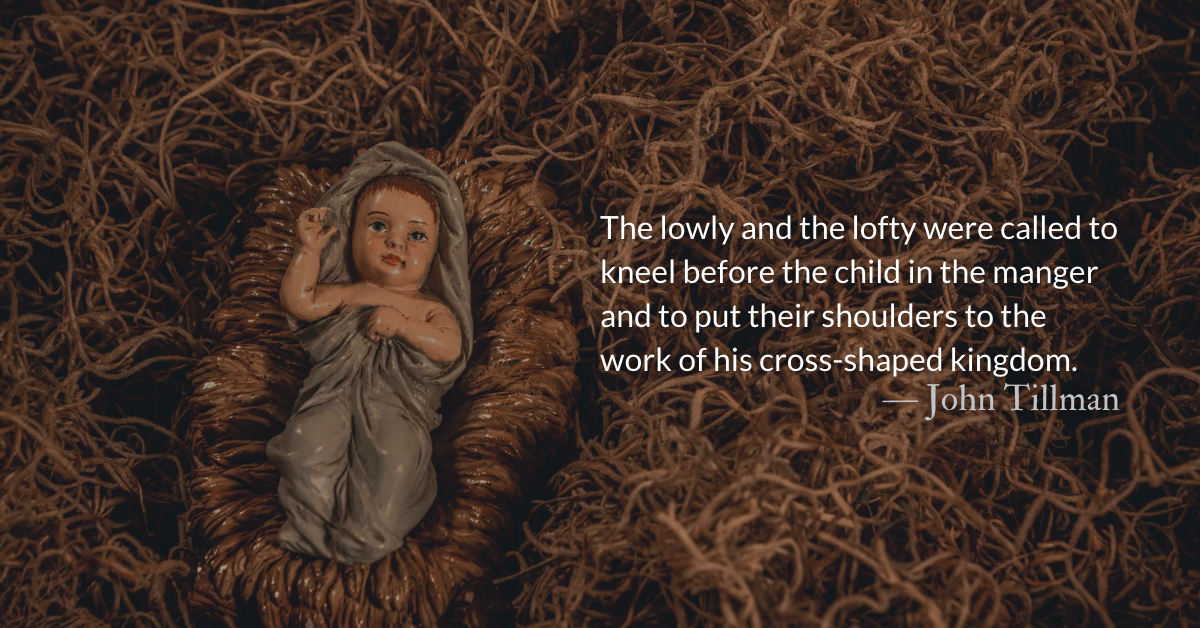 The Lowly and the Lofty — Peace of Advent

Scripture Focus: Nehemiah 3.5
5 The next section was repaired by the men of Tekoa, but their nobles would not put their shoulders to the work under their supervisors.

Luke 2.8-15
8 And there were shepherds living out in the fields nearby, keeping watch over their flocks at night. 9 An angel of the Lord appeared to them, and the glory of the Lord shone around them, and they were terrified. 10 But the angel said to them, “Do not be afraid. I bring you good news that will cause great joy for all the people. 11 Today in the town of David a Savior has been born to you; he is the Messiah, the Lord. 12 This will be a sign to you: You will find a baby wrapped in cloths and lying in a manger.”

13 Suddenly a great company of the heavenly host appeared with the angel, praising God and saying,

14 “Glory to God in the highest heaven,
and on earth peace to those on whom his favor rests.”

15 When the angels had left them and gone into heaven, the shepherds said to one another, “Let’s go to Bethlehem and see this thing that has happened, which the Lord has told us about.”

Reflection: The Lowly and the Lofty — Peace of Advent
By John Tillman

Nehemiah’s list of the community’s work is not just a list of laborers. It lists those who put their faith into action. Their faith shaped stone and lifted beams. Their faith smoothed mortar and set gates on their hinges.

Hidden in the list are stories. In one place, Hassenaah works with his sons to set the beams and bolts of the Fish Gate. (Nehemiah 3.3) In another place, Shallum (a ruler of Jerusalem) works with his daughters to repair a section of the wall. (Nehemiah 3.12) The project is a family affair and no one is excluded except those who exclude themselves. Such were the nobles of Tekoa.

Workers and supervisors came from Tekoa, but the nobles abstain. They “would not put their shoulders to the work.” This wasn’t laziness or a disdain for labor. It was their hearts, not their shoulders, that weren’t up to the task. It was a failure of faith not a failure of physicality.

Tekoa, near Jerusalem, was a notable place. It was known for strength. One of David’s mighty men was from Tekoa. (2 Samuel 23.8, 26) It was known for wisdom. The “wise woman” of Tekoa spoke before King David. (2 Samuel 14.1-3) However, the most famous resident of Tekoa was the prophet Amos, who called himself one of the “shepherds of Tekoa.” (Amos 1.1) And from the hillsides of Tekoa, the town of Bethlehem can be seen only six miles away. The shepherds who came to the manger of Jesus, may have traveled from the fields between Tekoa and Bethlehem. (Luke 2.15)

To the shepherds, God came by a miraculous vision of angels. To King Herod and the Magi, God’s message came through scholarship, prophecy, or privilege. The shepherds and the Magi responded in humility. (Luke 2.16-20; Matthew 2.11) Herod responded with pride and violence. (Matthew 2.16)

Whether lofty or lowly, we each must respond to the call to peace and peacemaking this Advent. How has God’s message come to you? Will you put your shoulder to the work or abstain? Will you put your faith into action to shape stone, lift beams, and set gates on their hinges so that through Jesus, the gate, (John 10.6-9) people may enter God’s city of peace?

Divine Hours Prayer: The Request for Presence
Send out your light and your truth, that they may lead me, and bring me to your holy hill and to your dwelling;
That I may go to the altar of God, to the God of my joy and gladness; and on the harp I will give thanks to you, O God my god. — Psalm 43.3-4

Read more about Supporting Our Work
Ad-free content is rare and our donors make that possible! Please consider becoming a one-time or monthly donor!

Read more about Peace from Uncertainty
The questions will always come but the story reminds us that nothing has ever been outside of his control.