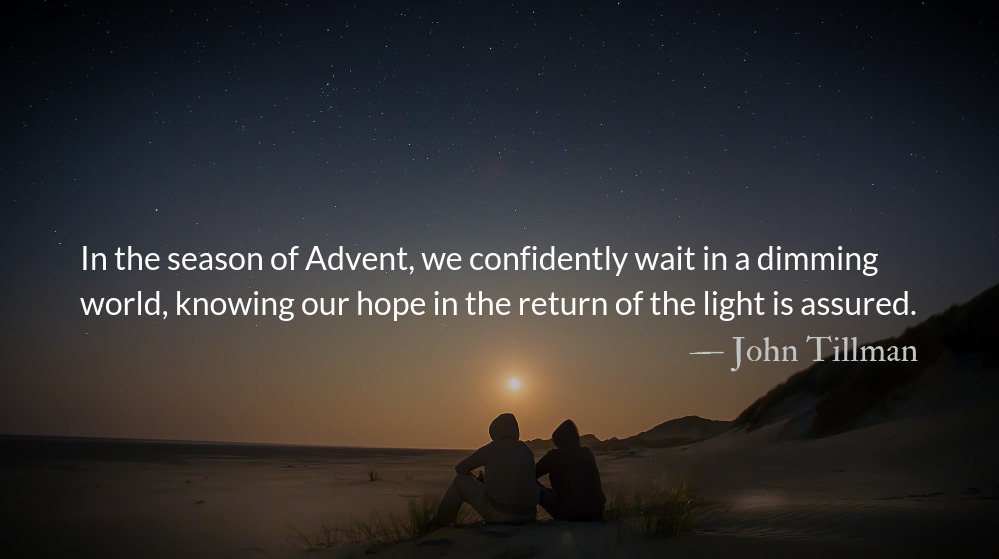 The Gift of Hope :: Hope of Advent

Luke 18.8
When the Son of Man comes, will he find faith on the earth?

Reflection: The Gift of Hope :: Hope of Advent
By John Tillman

When the church decided to set its celebration of Christ’s birth around the Winter solstice, it was no accident or happenstance. And it certainly wasn’t because anyone believed that day was Christ’s actual birthdate. It was instead based on the teaching tool available in the signs of the heavens—in the darkening of the year.

As the year gets darker and darker, an ancient tension grows and a question rises. Will the light return? At the turning of the year, there is a point at which ancient astronomers could not measure whether the light was receding or had begun to return. At the year’s darkest point, humanity waits until the light returns, like a second Easter.

In the season of Advent, we confidently wait in a dimming world, knowing our hope in the return of the light is assured. The hope of Advent is not a naive or weak hope, but one that perseveres into the darkness.

During Advent we have faith in things not seen. We contemplate the signs of what is hoped for. There is reason for hope and joy in the waiting.

Hope in the Christian context—as a gift of Jesus during Advent—is not like a casual wish for a Merry Christmas or a Happy New Year. It is a synonym for faith.

“Will the Son of Man find faith when he comes?”

What are you waiting for? Reach out in faith. Reach out for the gift of hope.

Prayer: The Call to Prayer
Come, let us sing to the Lord, let us shout for joy to the Rock of our salvation. — Psalm 95:1

Additional Reading
Read More about Face Like Flint :: A Guided Prayer
May we, like Christ and like Thomas, set our face like flint in anticipation of suffering. May we listen, follow, and speak, and, if not for God’s intervention, suffer or die with Christ.

Read More about A Congregation of Hope
When it comes to putting broken lives back together—when it comes, in religious terms, to the saving of souls—the human best tends to be at odds with the holy best.