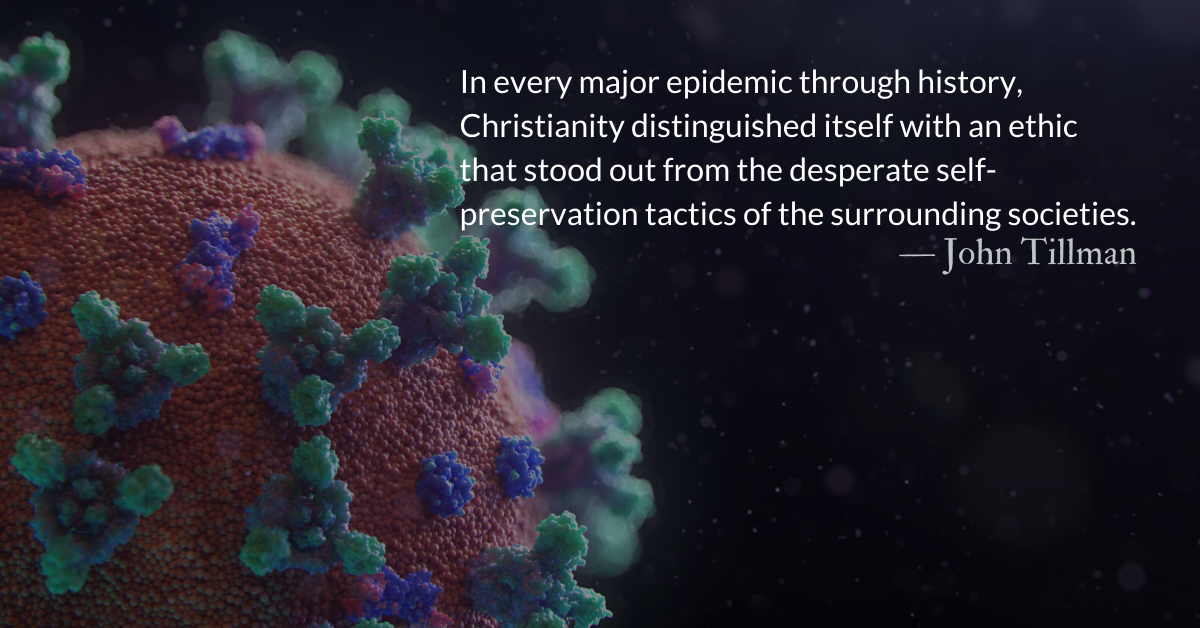 The Church’s Historical Response to Plague

Scripture Focus: Proverbs 4.20-22
My son, pay attention to what I say;
turn your ear to my words.
Do not let them out of your sight,
keep them within your heart;
for they are life to those who find them
and health to one’s whole body.

Reflection: The Church’s Historical Response to Plague
By John Tillman

*This will be quite a long post compared to our normal 400 words. The first half is a bit of a “backstage tour” of The Park Forum and an explanation of why we rarely write about current events such as COVID-19. If you’d like to skip over that and get straight to our devotional related to the pandemic and a response of faith, scroll on down to the heading “The Church’s Historical Response to Plague.”

At The Park Forum, we tie our devotional writing tightly to our reading plan. We rarely diverge from it other than to write about major seasons of the church year such as Lent, Easter, Advent, and Christmastide.

We address cultural trends but rarely, if ever, address specific current events. This is intended to keep our content timeless by relating it primarily to the timeless Word of God. It is also a bulwark, intended to prevent our work from becoming a response to the world, rather than a response to God’s Word. We succeed or fail in following these ideals to varying degrees each week, by God’s mercy.

The other reason we rarely write about current events is less idealistic and more practical—our publishing timeline is too long. In order to have our emails sent at 5:00 AM in each timezone around the world, we need to “send” them 24 hours in advance. We write them a minimum of 36 hours ahead of when you read it in the email or online. That’s an eternity in today’s news cycle. And honestly, when I am writing that close to the send deadline, it is quite nerve-wracking and mistakes can be made. My preference is to be at least five to ten days ahead. I am writing this, which will publish on Tuesday, on the preceding Friday evening. This is a bit late for my taste, but by the time you read it, any time-sensitive information will likely be out of date.

With all of this in mind, let us prayerfully approach the topic of COVID-19 and the gospel.

The Church’s Historical Response to Plague
Sickness and disease comes frequently into the pages of scripture.

The ancient Jewish ethic of ritual washing and ritual cleanliness was at times (especially in regards to transmissible diseases and conditions, such as leprosies and dangerous molds) a practical step of keeping the community healthy. The role of the priests was to risk their own safety in order to inspect contaminated individuals and contaminated dwellings for signs of infection. To cause another person to be infected and in risk of death due to negligence to these regulations was to be in violation of the commandment, “Do not murder.”

Today we have outsourced home inspection to the real estate industry and personal health to the healthcare industry. (When was the last time your pastor inspected your house for black mold?)

In an article for Foreign Policy Magazine, Lyman Stone writes of how Christianity took this ancient Jewish ethic further:

“The Christian motive for hygiene and sanitation does not arise in self-preservation but in an ethic of service to our neighbor. We wish to care for the afflicted, which first and foremost means not infecting the healthy. Early Christians created the first hospitals in Europe as hygienic places to provide care during times of plague, on the understanding that negligence that spread disease further was, in fact, murder.”

Throughout history (Particularly in the Antonine Plague of the 2nd century, and in the Plague of Cyprian in the 3rd) Christians were noted as the one group which consistently, century after century, took risks to their own health in their service to the infected and the suffering. The sociologist and religious demographer Rodney Stark claims that death rates in cities with Christian communities during these plagues may have been half that of other cities.

We see it again In 1527, when the bubonic plague struck Wittenberg. Martin Luther refused to flee the city but stayed instead and ministered to the sick. This decision cost him the life of his own daughter, Elizabeth. When asked whether Christians should flee a plague, Luther produced a pamphlet in answer. It can be boiled down to five words, “We die at our posts.”

In every major epidemic through history, Christianity distinguished itself with an ethic that stood out from the desperate self-preservation tactics of the surrounding societies.

The historic church has left us a great example and testimony based on sound application of the scriptures.

Are we following it? Are we caring for our neighbors or just for ourselves?

Pray that the Holy Spirit would lead you and your faith community to shine in this moment of fear and uncertainty. Be safe. Follow best practices for lowering risks of transmission. Don’t be foolish. But do all this not in service of your own safety, but in service to the community.

When this crisis passes, will every unused bottle of hand sanitizer or vital goods stashed in our homes that could have been donated to our church or sent to a senior living center, or given to a neighbor stand as a testimony that we cared more for ourselves than for others?

This is a stark challenge to our hearts to see if we are following in the example laid before us by the Church. Tomorrow we will look at the divine comfort and inexplicable peace the Church relied on to carry out its mission during past crises.

Divine Hours Prayer: The Greeting
Awesome things will you show us in your righteousness, O God of our salvation, O Hope of all the ends of the earth and of the seas that are far away.

Read more about Taking Advantage of the Desperate
From a business perspective, the noblemen confronted by Nehemiah were simply following the market. Payday lenders would describe it as filling a “financial service void.”

Read more about The Purpose of Power
After prayer and fasting, Esther’s concerns for her own life disappear and her purpose is clarified. The purpose of Esther’s power is to serve others. So it is with us.