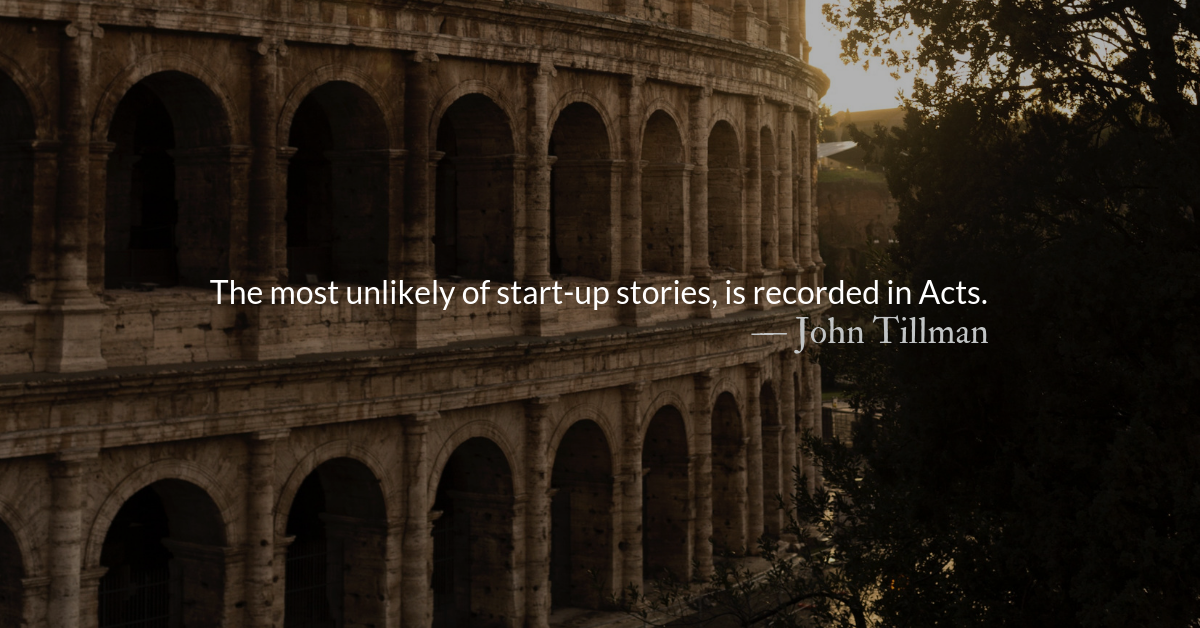 The Church of Acts

Acts 5.38-39
Keep away from these men and let them alone, for if this plan or this undertaking is of man, it will fail; but if it is of God, you will not be able to overthrow them.

Reflection: The Church of Acts
By John Tillman

Everyone loves a good start-up story. The work of Bill Gates and Steve Jobs working away in their garages is enshrined in the Disney attraction, Spaceship Earth at EPCOT, as a key moment in the history of humanity’s advancement.

But the most unlikely of start-up stories, is recorded in Acts. Christianity entered a marketplace of religious ideas that was glutted with more attractive, easy to follow religions that stroked the deepest lusts of humanity’s urges.

The hostile empire of Rome was very protective of its state religion. Christianity had no political backing. No cultural influencers.

In a sermon, Timothy Keller asked how Christianity “not only forced the most powerful state in the history of the world to come to terms with it, but even was able to outlive and survive the complete destruction of the very civilization and government that sought to destroy it?”

There’s not an investor that would have given the early church a dime. Nothing accounts for the speed and scale at which Christianity spread.

Gamaliel, of the Sanhedrin, wisely saw that the young group of untrained men had little chance of success short of the miraculous intervention of God. His policy of non-interference did not seem to win out, however. A few short chapters later, Stephen will be stoned by this same group and Gamaliel’s own student, Saul would become a scourge to the community of Christians.

Yale historian Kenneth Scott Latourette, in his seven-volume series, A History of the Expansion of Christianity, concludes:

“It is clear that at the very beginning of Christianity, there must have occurred a vast release of energy, unequalled in the history of the race. Without it, the future course of the faith is inexplicable… Something happened to the men who associated with Jesus. That burst of energy was ascribed by the early disciples to the founder of their faith. Why this occurred may lie outside the realms in which historians are supposed to move.”

Acts is not a step-by-step program to cut-and-paste into modernity. It isn’t a start-up handbook. The growth of the early church was and remains inexplicable. But it is no flash-in-the-pan start-up. The light of the world cannot be hidden under our bushels of greed—at least not for long.

The clue Luke gives us is in the title—Acts. They will know we are Christians by our love. By our actions. Let us be found working when he comes.

Prayer: A Reading
Jesus taught us, saying: “I am the true vine, and my Father is the vinedresser. Every branch in me that bears no fruit he cuts away, and every branch that does bear fruit he prunes to make it bear even more. You are pruned already, by means of the word that I have spoken to you.” — John 15.1-3

Read more about Jesus with Axe and Fire
May he baptize us in fire, making of us a light for the world and a spark to ignite God’s love in our communities.

Read more about Names of Christ—Vine, Resurrection, and Door
Do the pleasures of the world seduce you? Turn all the more to the Cross of Christ to find solace in the sweetness of the vine that clustered there.