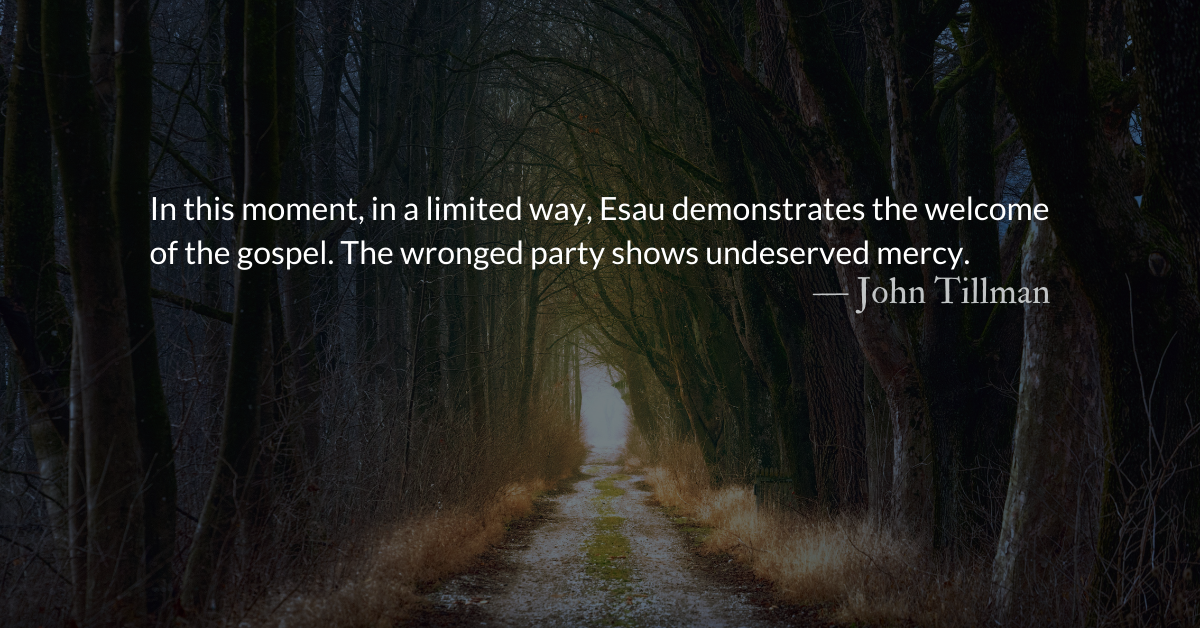 Scripture Focus: Genesis 33.3-4
3 He himself went on ahead and bowed down to the ground seven times as he approached his brother.
4 But Esau ran to meet Jacob and embraced him; he threw his arms around his neck and kissed him. And they wept.

A prodigal son, who betrayed his family’s trust approaches home. He is limping. He is fearful of rejection. His hopes are focused on survival.

But the wronged party abandons dignity and pride and runs to the prodigal. He embraces him  and kisses him, welcoming him rather than harming him. Esau running to meet Jacob and the prodigal’s father running to meet his son, are extraordinarily similar scenes. (Genesis 33.4; Luke 15.20) Esau and Jacob must at least have been in the back of Jesus’ mind when he told of the prodigal.

Of course, the actual forgiveness and reconciliation between Esau and Jacob is limited. They are each still only human. Their trust is limited. Their faith in one another is justifiably small. In the future, violence will dominate the relationship. But in this moment, in a limited way, Esau demonstrates the welcome of the gospel. The wronged party shows undeserved mercy.

Our ability to bargain and appease God is non-existent. Jacob is no penniless prodigal repenting from the pig pen. He is wealthy and prosperous and he sends valuable resources ahead of himself to appease the justifiable anger of Esau. We have no such offerings to send that can appease or compensate for our rebellion and sin. When we come to Jesus we have nothing to offer him of value. We have only the filthy rags of our sins clinging to our backs.

Jesus is truly righteous and makes a sincere offer. Esau was wronged by Joseph but Esau was also sinful, violent, and had despised the birthright Jacob stole. Esau’s offer of protection and forgiveness is suspicious and he is untrustworthy. Jesus, however, is fully righteous. He makes us a fully genuine offer that we can have full faith and trust in. If we confess our sins, he is faithful and just to forgive them.

May we also be willing to rush that forgiveness to those around us. Let us be faithful. Let us be just. Let us run to forgive.

Divine Hours Prayer: A Reading
Jesus taught us, saying: “If your brother does something wrong, rebuke him and, if he is sorry, forgive him. And if he wrongs you seven times a day and seven times comes back to you and says, ‘I am sorry,’ you must forgive him.” — Luke 17.3-4

Read more about Faith After the Storm
How many times do we go to Jesus in prayer, without faith but with bucket-fulls of complaints…”Don’t you care, Jesus?”

Read more about Meals Together, Forgiveness to Go
What if all our meals were markers—altars of forgiveness and belonging? Come to the table. Lay down your burdens. Offer forgiveness.