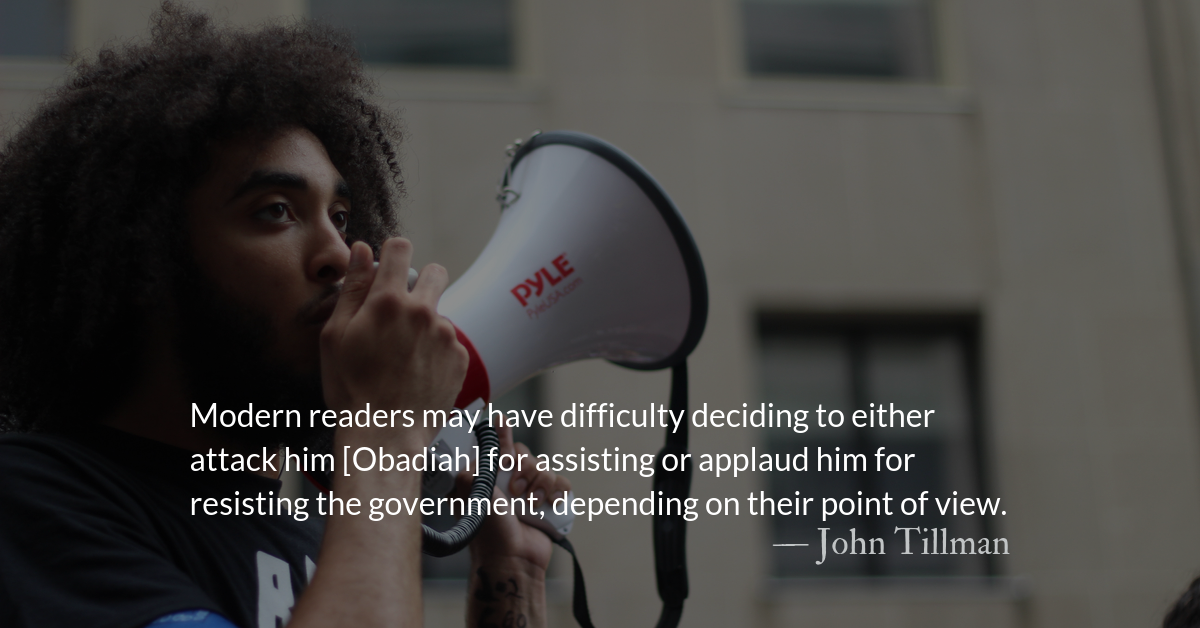 Resisting or Assisting a Corrupt Regime?

Scripture Focus: 1 Kings 18.3-4
Obadiah was a devout believer in the Lord. While Jezebel was killing off the Lord’s prophets, Obadiah had taken a hundred prophets and hidden them in two caves, fifty in each, and had supplied them with food and water.

Reflection: Resisting or Assisting a Corrupt Regime?
By John Tillman

Obadiah was a government minister who was faithful to God, despite serving under a corrupt, anti-God, and explicitly evil pair of rulers. Modern readers may have difficulty deciding to either attack him for assisting or applaud him for resisting the government, depending on their point of view.

Ahab and Jezebel are legendarily evil. Jezebel’s name became a byword for an evil woman and a trope in fiction throughout history.  Even Shakespeare, who used or referenced scripture often, seems to have had an eye on Jezebel when he created the character of Lady Macbeth.

However, it is Ahab who fits the mold of the autocrats of today’s politics. He is petty, pouting, vindictive, blustering, and evil. He feigns faith in God, yet his true allegiance seems to be only to his own selfish desires and enrichment. Ahab isn’t concerned with finding food for his subjects amidst the famine, but for his animals. This is where Obadiah, who risked his life to feed people faithful to God, is found by Elijah, helping Ahab search for water to save the evil king’s animals.

It would be easy to point to Obadiah and politicize him as representing someone serving today in a modern democratic government. However, comparing the actions of those in scripture, living under tyranny, to people today, living under the many freedoms of democracy, is not a truly fair comparison.

Even in poorly functioning democracies, citizens are granted freedom of movement, freedom of choice in career and among employers, freedom of speech in supporting political parties or individuals. No person in scripture, including Obadiah, ever possessed any of these freedoms.

People of faith today have far more nuanced choices that can be made. Obadiah’s covert bravery is admirable and often necessary, even in today’s world. But in a culture where we have more freedom to do so, the world needs to see Christians more directly confronting evil, following the model of Elijah.

We must remember that Obadiah and Elijah are not enemies. They are on the same side.

No matter whether we follow Obadiah’s model of illegal, covert resistance from within, or Elijah’s more confrontive and vocal model of resistance, we must remember that no matter how tyrannical our leaders or our government, we are citizens and ambassadors from a greater kingdom and no human government, party, or leader is owed our loyalty or faithfulness.

Divine Hours Prayer: A Reading
Jesus taught us, saying: “There is no need to be afraid, little flock, for it has pleased your Father to give you the kingdom.” Luke 12:32

Read more about No Princes :: Readers’ Choice
How many believers veil their trust in men as trust in God?

Read more about The Losers Who Write History
Not one of those glowingly positive, king-praising prophets’ writings are in our Bible. Instead we have the writings of the losers. The cries of the oppressed.